“More things are wrought by prayer than this world dreams of.” – Lord Alfred Tennyson (1809- 1892), poet Laureate during much of Queen Victoria’s reign.

Praying to St Antony of Padua (15/8/1195 - 13/6/1231), Italy, especially through novenas is known to restore things lost. (For the uninitiated, novena is an ancient traditional praying in Christianity, consisting of prayers repeated for nine successive days before liturgical feast on the 10th day.( In the special  case of St Antony’s Ashram at Jeppu, the novena stretches to 13 days ending with the saint’s  feast on June 13 – his death anniversary).

If someone loses a key of the house lock of car, among Christians, first thoughts turn to St. Antony. That trust and confidence may be well placed considering the devotees who throng  Milagres Church, Mangaluru every Tuesday for novena in honour of the saint. They have their petitions expressed through a long classified list read out by the officiating priest who is generally from St. Antony’s Asylum (Ashram) – a home for the poor, destitute, aged and abandoned – at Jeppu. There is a long history behind the asylum stretching over a century. 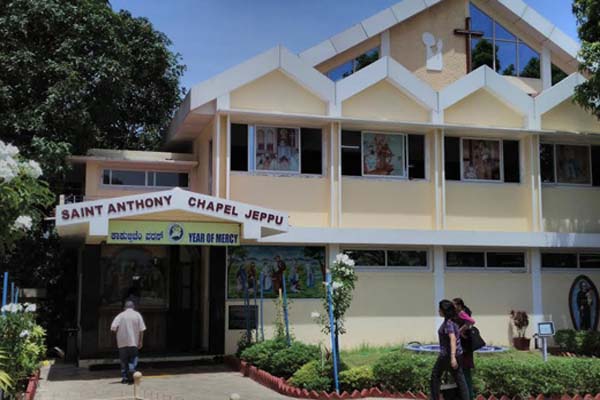 In 1898, the assistant parish priest of Milagres, Fr M P Colaco, returned from Padua, home town of St. Antony, with a relic of the saint. He started a devotion to St Antony on June 12, 1898 which continues on every Tuesday even now. On the days of this devotion, now called St Antony’s Novena, bread was distributed to poor people who came begging at the church compound. This came to be known as St Antony’s bread and was given to 25/30 people. As time went by, it was realised that these unfortunate souls had no means for lunch or dinner. This sowed the seeds of what is today St Antony’s Asylum which is home for 390 people – men women and children (numbers vary).

It was also realised that the recipients of St Antony’s bread every Tuesday had no shelter of their own. So, a number of huts were built across the road from Milagres Church. As the years passed, the number of destitutes so catered increased beyond the capacity of the huts at Milagres Church. So, in 1931, the scene shifted to Jeppu where 28 acres of land was acquired in a government auction. About 70 beneficiaries moved to this location. The campus is now spread over 24 acres which has 13 buildings which function as dormitories with 20 beds in each. In addition, there is a chapel. Many of the inmates are mentally retarded or alcoholics. Women and children include those driven out of the house by alcoholic males. The children have their own ward and get education until they can safely fly out of the coop.

St Antony’s Asylum is managed by its director – it was Fr Clifton at the turn of this century when I first wrote about it. There were office staff and religious Sisters of the Order of Helpers of Mary. Many of the inmates themselves were given some responsibilities to run the attached farm whose cocoanuts, paddy, vegetables, piggery and dairy partly meet the requirements of the asylum. The inmates can wander around the vast campus, watch TV or go to the chapel for quiet prayer and meditation. About 15% of the non-Christian inmates can have their own private devotion or prayers.

About half of the inmates are senior citizens, with many of them bed-ridden.  They get their medical attention and medicines in-house. Serious cases are taken care of at Fr Muller’s Hospital. The asylum doesn’t charge anything for admission or maintenance. On the other hand, it advises the prospective inmates to settle their property claims or problems before admission.

“An empty sac does not stand erect.”  So, how does the asylum run for over a century? As noted earlier, the whole thing started with St. Antony’s devotion at Milagres church. That goes on with Christians and non-Christians crowding the church every Tuesday with petitions and offerings. Besides offerings put in the donation box, devotees of St Antony send offerings through mail.

What do those who manage the institution get in return? As Fr Clifton, an earlier director, explained:  “It is the satisfaction that we are helping and caring for the unwanted people whom their families and society have rejected”.

What Ails Mangaluruans? Will and Whom St Antony Oblige?

An old news item from Mumbai that a foreign-made pistol was found in the donation box of St Michael’s church at Mahim draws attention to the novena devotion to Our Lady of Perpetual Soccour which draws hordes of devotees in many churches. The devotion at Mahim church, where the revolver was found, is considered the mother of all novenas. Several sessions are held from morning to midnight which are attended by people of various faiths. The pre-midnight sessions are the favourite of Bollywood actors. Such devotions have a rationale.

“Ask and it shall be given to you” - The Bible

Based on these assurances people pray for various things and also to save them from difficulties. Christian favour-seeking and thanks-giving often takes organised form, tabulated and read out at church services (novenas). Many of these favour-seeking devotions are formalised through novenas.

Mangaluru has its own favour-seeking centres and shrines. The oldest of these, dating back to 1898, is St Antony’s novena at Milagres Church every Tuesday after the 6 PM mass service. It is conducted by the priests from St. Antony Charity Institute (Home for the Destitutes) at Jeppu. St Antony is known for finding lost things and is also described as Saint of Lost Causes. We zero down on St Antony at Milagres because of the related novena gives an insight into what worries, bothers - physically, mentally emotionally and materially - Mangaluruan Christians (which can apply to non-Christians as well because many of them attend). This is reflected in the intentions read out at the novena. Here is an indicative list read out on a typical Tuesday, with number of requests in brackets.

There were 54 thanksgivings for favours received. It may be surmised that all who had their wishes fulfilled may not go back to thank. Some tend to be complacent or arrogant and think that their work was done despite the novena. They tend to say that a cold gets cured in 15 days with medicine and in a fortnight without it. They are in good company. In one Biblical episode Jesus cures ten lepers and only one comes back to thank him, provoking him to say: “Didn’t I cure ten? Where are the others?”

The onstitute’s then director, Fr Clifford D’Souza, got weekly petitions collected from Milagres Church, tabulated and read them out at the novena. He conducted the 15-minute novena service in a soothing and reassuring mode. Those who thronged the novenas included many non-Christians. Much of the support to run St Antony’s Asylum/ Ashram comes from the votive donations made by devotees and favour-seekers at the weekly novenas at Milagres. Others go or write to the Ashram asking for prayers for their intentions.

Faith is essence of prayer. As Burns says, “They never sought in vain that sought the Lord aright.” That brings us to the flippant side of prayer. Kneeling on the first pew of the church at the novena at Milagres church is Peter who is fighting a court case against Paul who is kneeling on the fifth pew. Jane on the fourth pew is praying for her father to forsake drink whereas he on the 10th pew wants his daughter to be enlightened so that he can continue to enjoy his moderate drinking. Charlie and Vincent work for the same firm and both are eyeing and praying for the manager’s position. Who will St Antony oblige?

The subject is open to many views. What are yours? Your response is welcome in the format given below (Pl scroll down a bit). Once again, welcome to reason.