Are We Heading from Divide & Conquer to Divide & Grab?

The origin doctrine of divide and conquer goes back to Julius Caesar, Roman general and statesman, assassinated in 44 BC and the subject of a play by William Shakespeare titled after his name. But, the original dictum has seen a series of changes like divide and rule (British colonizers), divide and grab/loot (post-Independence Bharat). But, first the facts with latest media reports on the subject.

Renaming Hyderabad Karnataka – the region comprising six north-eastern districts of the State – as Kalyana Karnataka on September 17, 2019 is often projected as a milestone in the region’s history. It is also used by the BJP as a counterweight to the fact that it was during the Congress regime that the region got Special Status with the insertion of Article 371(J) of the Constitution in 2002.

Present Chief Minister B S Yediyurappa did not only proclaim the region as Kalyana Karnataka on September 17, 2019, on Kalyana Karnataka Utsav Day (which was earlier celebrated as Hyderabad Karnataka Liberation Day), he also made several promises as a gesture of his government’s commitment to the development of the region.

Despite old promises remaining unfulfilled, Chief Minister made new ones for Kalyana Karnataka during the celebration, this year, on September 17. 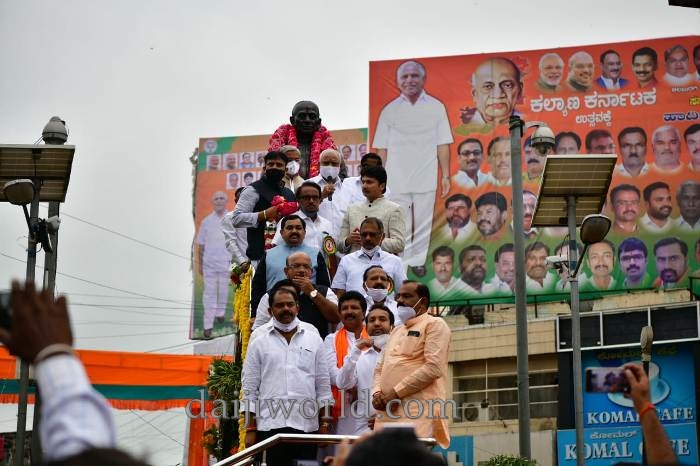 With the promises he made during the last Kalyana Karnataka Utsav Day – establishment of a separate secretariat for the implementation of Article 371(J) of the Constitution, shifting Kalyana Karnataka Special Cell from Bengaluru to Kalaburagi, increasing special grants to Kalyana Karnataka Regional Development Board (KKRDB) and filling the 10,748 government posts lying vacant in the region – remaining unfulfilled, Chief Minister B S Yediyurappa made a fresh promises on the occasion of Kalyana Karnatak Utsav Day this year on September 17. These included completion of construction of Anubhava Mantapa in Bidar district within four months, implementation of for water supply projects for two districts and 10 lift irrigation projects along Kagina River at a cost of ?3,000 crore. He spoke about negotiation with the Union government for making Kalaburagi a new railway division, establishment of a bulk drug park in Yadgir at a cost of ?1,446 crore and setting up a toy manufacturing cluster on 400 acres of land in Koppal. These were among the new promises the Chief Minister made in his public address after hoisting the national flag at DRA Grounds in Kalaburagi on Thursday to mark 2020 Kalyana Karnataka Utsav Day.

Apparently, because one year on, his promises have not been fulfilled, the region now demands statehood for itself. Presently, it is a shrill noice. A Dalit leader, Gurushant Pattedar, has demanded that statehood be granted to Kalyana Karnataka. Addressing the media on September 16, 2020, at Kalaburagi, he demanded that the government abrogate the special status accorded to the region and sought statehood for the region. It may be noted that already two States – Andhra Pradesh and Telangana - have been carved out of the old Hyderabad Kingdom of the Nizams.

This is the latest instance of a demand for divide and rule which have resulted in splitting states, districts and taluks – with hidden motives of divide and rule/grab.

According to a report in The New Indian Express dated March 1, 2019, the state government had given approval for the formation of 12 new taluks and had issued an order. The then CM H D Kumaraswamy, in his budget speech, had announced that Harohalli, Chelur, Teradala and Kalasa will be made taluks. The government, however, had given in-principal approval for 12 new taluks, stating that there is a need for restructuring taluks for “effective administration”.

The latest demand for new Taluks to new States confirms the theory of divide and grab. With modern transport ensuring ease of travel to existing State, District and Taluk headquarters and the explosion of telecommunication and digital revolution, which in the current Kovid-19 brings traditional class-rooms to every nook and corner, duplicating “Vidhan Soudhas” and staff at taluk levels and creating new taluks seems a waste of State resources.

Then, why does it happen? Bangaluru and major district headquarters like Mysore and Mangaluru have a strong presence of media persons and civic vigilantes and any wrong-doers are easily exposed. But, in remote and minor cities and towns such vigilance is not common and in some cases the inconvenient busybodies could be bought off. So, the agitation for taluks/districts in smaller centres where it is easy to manage to grab public money for private greed.

The subject is open to many views. What are yours? Your response is invited in the format given below. (Pl scroll down). Welcome to Reason!

Title: Are We Heading from Divide & Conquer to Divide & Grab?