Are We Deceiving Corona and Hurting Ourselves?

The relentless march of Corona-19 is aided by our unthinking, selfish fellow-citizens who aid and abet the destructive advance of the pandemic. Since they seem to be mindless imbeciles, let me start with a story narrated to me by an illiterate farm-hand working on my ancestral property when I was an impressionable 10+ years old.

There was a large pastoral island cut off from the mainland except that it was linked to the mainland and a nearby city by a causeway. The islanders lived by fishing in a large lake and by milking their cows and selling the milk and fish in the city using the causeway. The cattle, after grazing on the vegetation-filled island were taken to the lake to slake their thirst and also to have their cleansing bath. The islanders also drew their drinking and domestic cleaning water from the same lake.

Tempted by a salesman

Then, one year, few days before the annual milk-pouring day, an itinerant salesman from the mainland visited the islanders with bottles of white liquid which, he said, was a cleansing and disinfecting agent and warded off pesky mosquitoes, cockroaches and mice. He explained that one table-spoon of the liquid can be used to make a full bottle of the liquid which would still be good as exterminator. The islanders bought a stock of the white liquid at highly discounted prices.

The annual milk-pouring ritual day was approaching. One of the islanders, Mr X, reasoned: “Why pour expensive milk and instead pour the diluted bottled liquid? Nobody will notice as it was as white as milk”. So thought, and acted on, everybody else on the island.

So, the islanders lost their livelihood – milk and fish – and they all migrated from the island looking for fresh means of livelihood.

A similar charade is going on in India ever since Corona-19 pandemic hit India since March 2020. Now we focus on some current realities on the basis of media coverage.

According to New Indian Express, the Deputy Commissioner of Mysuru got a call on July 24, 2020, regarding a missing quarantined Corona+ diagnosed person. Surprised, he told the caller that he was the DC. The caller, however, refused to believe that it was the DC himself speaking and told him not to pull a fast one. It took the DC some time to convince the caller of his real identity.

According to sources, the man had given the officials false information multiple times. The quarantine watch team said that on an average, every day two to three individuals give false identity and contact numbers making it tough to trace the contacts.

Not a stray case

This is not a stray case. According to a report in Deccan Herald (24/7/20) headlined “Search on for 180 ‘missing’ positive cases in Tirupati’, “People undergoing Covid-19 tests in Tirupati but providing incorrect contact information are posing a challenge for the authorities in tracing those who tested positive among them”. Elsewhere there have been reports of close to 20,000 similarly “missing” and untraceable.

All this is about citizens at large. What about our netas? The High Court of Karnataka on July 17, 2020, as reported in The Hindu, directed the State government to immediately act firmly against the political leaders and others who grossly violated the COVID-19 health safety norms during three recent events attended by former and current Ministers, including the Chief Minister. 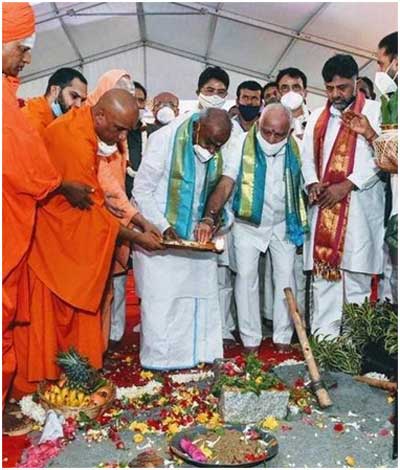 “It is necessary for the State government to immediately look into the alleged violations, and if [they are] found true, the violators have to be dealt with very firmly,” said a Division Bench in its order on a PIL petition. The Bench said the government should handle such instances of violation with a firm hand, no matter how influential the violators are.

In the latest instance, as reported in Daijiworld (6/8/20), in spite of the fact that his driver and gunmen have tested positive for corona-virus infection, minister Nagesh, instead of opting to get quarantined, took part in the COVID-19 meeting. It may be recalled that three weeks earlier he had participated in a grand feast, on the day when Sunday lockdown was in force, that too, neglecting the need to follow social distancing norms.

A corona-virus infection control meeting had been organized under the leadership of Nagesh at the office of Kolar Deputy Commissioner on August 5. However, social distancing was forgotten at this meeting. People sat close together without maintaining distance. Nagesh, by participating in this meeting, overlooking corona positive status of his personal staff, totally neglected the government rules.

But netas have their own excuses to trot out. Ironically, perhaps as a defensive move, ministers and netas seek change in public behaviour. According to a report in New Indian Express, Karnataka MLA Sumalatha told the paper (8/7/20): “Though social distancing norms are in place, the public doesn’t adhere to them. People take selfies, offer shawls and garlands, and it is difficult to explain the need for social distancing and hand hygiene to everyone. On any given day, a politician has dozens of visitors, usually armed with garlands, Mysore Peta, flowers, fruits and prasadam, theertha and other gifts. Marriages, house-warming and naming ceremonies are an everyday affair.”

The preaching for the janata continues. According to Daijiworld (5/8/20), the newly transferred Dakshina Kannada Deputy Commissioner, Dr K V Rajendra, in a press release has urged people visiting the malls, shops and markets to mandatorily wear masks and maintain social distance. He has directed the corporation commissioner to assign officials across 60 wards of Mangaluru city to hold corona-virus related awareness campaigns urging and educating the people on the benefit of wearing masks and maintaining social distance amid the growing pandemic.

It is best to conclude with the reaction by a Daiji reader, ‘Deshbhakt’, to the press release of the DC: “We have put behind us 5 Covind-19-infested months. Do people still require to be educated on protection from the virus??”

The subject is open to many views. What are yours? You are invited to respond to the above topic-essay in the format given below.

Title: Are We Deceiving Corona and Hurting Ourselves?