What is the Value-addition of Netas in Sarkari Ads?

A graphic illustration conveys a stronger message than words, as in the book jacket is a big selling point—one picture is worth a thousand words. This saying was invented by an advertising executive, Fred R. Barnard (1846-1895, British illustrator and caricaturist, noted for his work on the novels of Charles Dickens). To promote his agency's ads he took out an ad in Printer's Ink with the headline “One Look Is Worth a Thousand Words” and attributed it to an ancient Japanese philosopher. Six years later he changed it to “Chinese Proverb: One Picture Is Worth Ten Thousand Words,” illustrated with some Chinese characters. The attribution in both was invented; Barnard simply believed an Asian origin would give it more credibility.

Do torsos of netas count for graphic illustration in government ads?

The above is relevant when one considers the torrent of government advertising especially during national events – as was the case on August 15, 2020 when we marked our Independence Day. This year it was in the shadow of 20 of our soldiers martyred by the Chinese on the Indo-China border. So, I am presenting “This picture and that” of the ads carried prominently (full/half page/ front full solus) in our newspapers.

I begin with a full-page ad (featured alongside) released by the Delhi Government - unusual, innovative and most relevant. It departs from the usual moronic and lazy ads commonly released on such occasions. Lest readers find it hard to decipher the text of the Delhi govt.ad, it is given here:

“Every Martyr is a Freedom Fighter. Today we must pledge to build an India that is worthy of their supreme sacrifice. The India of their dreams will come out true through us – Aravind Kejriwal, Chief Minister, Delhi.” There is no photo-shopped profile of the CM to defile the sanctity of the ad. 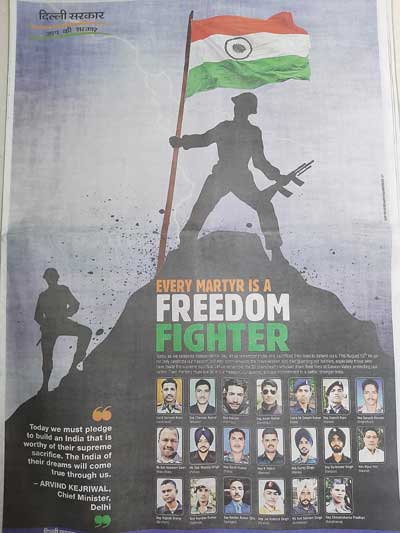 The visuals included (old) passport-size photos of the twenty martyrs, with their names below their respective photos in readable size. The main visual is a shadow profile of a soldier standing atop a rugged hillock with the Indian national flag in one hand and assault gun ready for action in the other.

What do the other full-page/half-page ads convey? Some inane and repeated messages, with photo-shopped profiles of Central/State netas in solitary splendour or with fawning sub-netas occupying prime positions in the State-paid ad space. Often the main message is about the time and venue where the netas would address the Janata so that the latter would directly receive and imbibe the pearls of wisdom dispensed through boring bhashans. Never mind all this would be there in newspapers, TV and other media as unpaid news.

Incidentally, let us not forget the unstated hidden motives behind paid ads. It could be to ensure better and flattering news and editorial coverage, suppress the temptation to advance justifiable criticism of the government and its netas (You don’t bite the hand that feeds you!).

I am tempted to reproduce a couple of neta-centred ads. That would be rewarding them with some more free projection. Instead, in the context of ads and human inclusion in them, like even a worm turns, even lowly janatas as farmers protest against the use of their non-photo-shopped profiles as reflected in the following news item.

According to a Chandigarh datelined report by Harpreeth Bajwa and published in New Indian Express (11/8/20), a Punjab farmer has threatened to sue the Union Agriculture Ministry for using his picture, without his consent, in an advertisement in support of new farm policies. 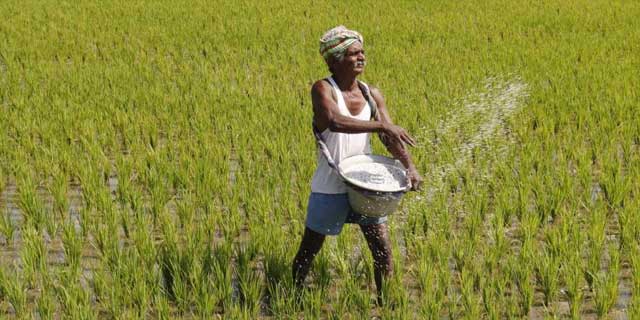 “I oppose these policies and ordinances, but the ministry has used my old photograph without my approval. I have been projected in poor light. I am ready to give some time to the government to remove my photograph from the advertisement and apologize. Else, I will send a legal notice to the Ministry of Agriculture,” said Gurpreet Singh of Chandbaja village in Faridkot district.

“The published photograph was taken in October 2018 when the DC of Faridkot visited my fields as I had not burnt the paddy stubble in my land that year as part of the anti-stubble burning campaign.’’

(The non-photoshopped photo of a farmer at work used alongside is for representation purposes only as Gurpreet Singh has objected to his photo used in the govt. ad)

Finally, I only hope that the use of the photos of netas in govt-paid ads is not a subject of a public interest litigation. If the PIL succeeds, it would be a double whammy. The cost of calculating the space occupied in the ads and the actual cost of space used for the photos of netas, when cost recovery is decreed by the court, will be paid by the exchequer (directly or indirectly) – and that includes you and me!


The subject is open to many views. What are yours? Your response is invited to be presented in the format given below (Pl scroll down).

Title: What is the Value-addition of Netas in Sarkari Ads?