(For the uninitiated, ‘Pot calling the kettle black’ is a situation in which one person/section/class criticizes another for a fault the first also has.)

This takes us back to the Bible and the oft-repeated advice to forgive and forget.

“… Jesus (was)… in the temple courts, where all the people gathered around him, and he sat down to teach them. The…Pharisees brought in a woman caught in adultery. They made her stand before the group and said to Jesus, “Teacher, this woman was caught in the act of adultery… the Law (of) Moses commanded us to stone such women. Now what do you say?” They were using this question as a trap, in order to have a basis for accusing him. But Jesus bent down and started to write on the ground (sand) with his finger. When they kept on questioning him, he straightened up and said to them, “Let any one of you who is without sin be the first to throw a stone at her.” Again he stooped down and wrote … At this, those who heard (him) began to go away … until only Jesus was left, with the woman still standing there. Jesus straightened up and asked her, “Woman, where are they? Has no one condemned you?” “No one, sir,” she said. “Then neither do I condemn you,” Jesus declared. “Go now and leave your life of sin.” (John 8: 1-11).

Now we come to a local and immediate situation.

Bengaluru, Sept 19: After the poignant verbal attack on Indian Administrative Service (IAS) personnel in the legislative Assembly, the Karnataka government has issued a circular imposing a ban on holding press conferences and issuing statements by the bureaucrats. The circular said that 'it has come to the notice of the government that government officers are indulging in issuing undesirable statements through press notes. These developments will have a wrong impact on the administration system in the state and they will also embarrass the government'.

The government has considered these developments seriously and imposed a ban on issuing undesirable statements through press conferences and press notes. They are only allowed to carry out official duties, the circular said. The circular warned that if any government official is found to air his views and opinions on any platforms against the government damaging the image and embarrass the government, serious disciplinary action will be initiated against them.

The circular was issued in the backdrop of a public spat between a JD(S) MLA and former minister and a lady IAS officer over two months ago. After the development, the state government had transferred her to the Muzrai department from the post of District Commissioner of Mysuru.

The issue was raised in the legislative Assembly session by the MLA, who said that officers should be tamed. "They are minting money here and amassing wealth... After retirement, they will contest against us in the polls," he charged. He also said that IAS officers shall not be allotted bungalows and they should be given smaller houses.

Sources in the IAS officers group maintained that they are upset with the government's decision and it is unfair to attack the whole IAS fraternity for the fault of few officers.

Coming back to the title of this topic essay, here is another news item headline:

New Delhi: A submission made to the Supreme Court has revealed the startling number of sitting legislators who face criminal cases, with the data showing that a whopping 2,556 MLAs and MPs from 22 states are accused in cases. If former MPs and MLAs from these states are also included, the number rises to 4,442.The submission was made by a senior advocate, who was the amicus curiae (Friend of the court) in a PIL seeking speedy disposal of criminal cases against elected representatives of parliament and state legislatures. In recent years, with the number of candidates and elected representatives who face criminal cases is rising steadily, there has been an increasing outcry against the criminalisation of politics. The top court was informed that in 174 cases against sitting MPs and MLAs, the offences are punishable with imprisonment for life. Other cases against elected representatives include offences under the Prevention of Corruption Act 1988, Prevention of Money Laundering Act 2002, Arms Act 1959, Prevention of Damage to Public Property Act, 1984, defamation under section 500 of the Indian Penal Code (IPC) and cheating under section 420 of the IPC. 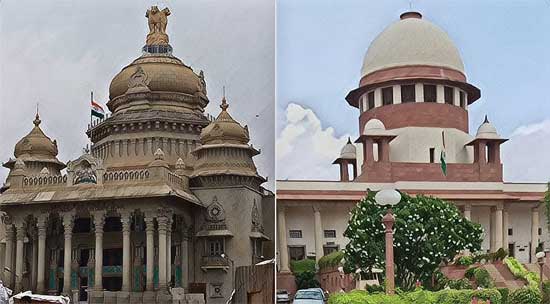 On September 22,2021 the subject was brought up in the legislature as a breach of privilege by the MLA noted above. But, the Law Minister, with wide support, said that it was not a breach of privilege issue but one of protocol. The Speaker of the Legislative Assembly has written to the Department of Personnel and Administrative Reforms to inquire into alleged protocol violation by the IAS officer involved.

Some legislators might think that they have the power of an elephant. But, such power must be used like an ant. Otherwise, it could hit back like a boomerang – as is happening

The subject is open to many views. What are yours? Your response is welcome in the format given below. (Please scroll down.)

Readers might recall an old Hindi film/song “Choli ke piche kya hai”. There is a non-filmy sequel to this. A cattle herder was driving the cows through a narrow causeway in a single pile. A new cow took position behind the first cow in the long line and, after a short march, shouted that the lead cow was nanga (naked). Then the other cows called the cows in front of them “nanga”. There was a bit of commotion and how it ended is a long story: “Poonch (tail) ka niche kya hai?”

When physical fitness tests of large group of job aspirants have to be done at one go, the candidates are asked to strip completely and line up warning that if anyone looked back would be instantly disqualified. There is a saying about “Curiosity killed a cat”. Many job aspirants have lost their prospective jobs because they couldn’t control their curiosity. Serves them right?