There is a saying in Tulu wherein an old Muslim Mulla is quoted as saying: “Joklen Kaintinalpa Yenen Kaunpade”. (Don’t bury me where children are buried). The underlying message could be: “Leave me in peace from the boisterous children.” This could be an apocryphal story and could have come from any priest of any religion devoting their lives, as in the case of Catholic priests, for their flock, come rain or shine or day or night. So, their wish to be buried in exclusive cemeteries - as in the one inaugurated in Udupi on November 2, 2020 and comprehensively reported in Daijiworld with generous visuals. On to Daijiworld:

Dr Gerald Isaac Lobo, bishop of the diocese...blessed the newly-built cemetery dedicated to the burial of the priests of Udupi diocese.”

Retiring priests of Mangalore diocese, which once included the present Udupi diocese, had a row of rooms at the west-end of Fr Muller Hospital (near the main dwara) at Kankanady (Vienny Home) apparently selected to be near to medical service in situ or by hospital admit. Now that transport (ambulance) is easy, the diocese build an exclusive building on the campus of St. Antony Ashram and more recently even more exclusive campus nearby designed for retired priests – where retired Bishop D’Souza also resides. 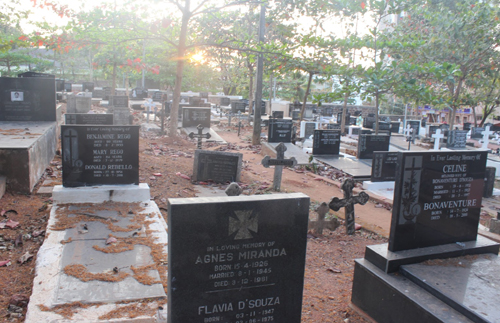 If the clergy is giving the lead, can laity be far behind? That takes me to the proper upkeep of cemeteries in parishes all over.

On November 2, Catholics mark All Souls Day by visiting the cemetery, cleaning the graves of the beloved departed, adorning them with flowers and lighting candles on the gravestones.

Cemeteries or burial grounds are where we consign the bodies of our dear departed with purple prose inscribed on the tombstones. Such inscriptions are called epitaphs and the simplest such is said to be on the grave of Alexander the Great: “A tomb now suffices him for whom the whole world was not sufficient.” We don’t know the dimensions of his tomb. But in modern times, in graveyards and cemeteries, tombs or graves are +- 6’ X 3’ standard.

Coming closer, for instance, to contemporary Mangaluru, Christians mainly take the burial route for their dear departed. Post-burial, a grand monument is raised over the grave. Unlike in the olden days when there was no limit on the dimensions of the monument, like heritage tombstones in Milagres cemetery, now there are outer limits on the dimensions. One can only compete in the quality of marble, lettering of inscriptions and photos of the interred. To that extent there is some equality of treatment among parishioners.

Graveyard or cemetery is one aspect of remembering the dear departed. There is elaborate celebration in their honour, like at the first Anniversary. It is also possible that in the case of recent bereavements, there may be a visit to the grave on the birthday or death anniversary of the departed. Then there is a common rush to the cemetery on All Souls Day (November 2) with flowers and candles. For this last occasion, the parish organises the general housekeeping of the cemetery. Otherwise, for better part of the year, the dear departed, represented by their graves, are out of sight and out of mind.

This results in highly neglected state of these monuments on which impressive sums are expended initially. Most cemeteries are marked by growing trees which shed their leaves on a sustained basis. They also host birds whose droppings mess up the monuments. And there is air-borne dust which settles in thick and sticky layers on the monuments.

On a recent visit to my wife Lynette’s monument in Bondel parish cemetery, I spied a lady, with a helper, with a bucket of water, cleaning solution, brush and mop. Fortunately, the pair did not have to bring water from outside because there are functioning taps provided by the parish within the cemetery compound. On asking, the young lady doing the clean-up, I learnt that she had come from Mumbai to visit the monument of her recently expired brother. Coming all the way from Mumbai to pay her respect to her brother, she had to start with cleaning layers of dust and bird dropping. It is no better for the local parishioners.

Is there a better way of tackling this than individual mourners having to keep the gravestones of their beloved departed in sustained shipshape condition?

Parishes charge a certain amounts for burial in an exclusive grave. Then, if you want to build a monument, you have to pay another amount.

It can be legitimately asked as to what happens to these amounts and why can’t part of these funds, or interest thereon, be used for sustained maintenance/housekeeping – say once a week – throughout the year without waiting for All Souls Day?

On the other hand, without going into parish accounts or getting into argument with parish councils and such other bodies, those having love and concern for their dear departed can float a Cemetery Maintenance Corpus Fund and organise sustained (weekly?) maintenance of the cemetery with the blessings of the parish priest/Council.

I am presenting a simple proposition. If there are 100 monuments built in a small parish cemetery, like Bondel, and each monument sponsor contributes Rs 10,000 on one-time basis, the total would be Rs 10 lakhs. At current fixed deposit interest rates it yields annual interest of Rs. 65, 000+. Of this, a person can be contracted for weekly cleaning of the cemetery for about Rs 4/ 5,000 a month (for about 4 hours of work at a stretch), leaving some Rs 5,000 annually for cleaning materials, brooms and mops. The sum available to the cleaning contractor (person) works out to Rs 800/1000 per working day on the basis of once a week and five weeks per month. The operation and sums involved can be scaled up depending on the number of monument patrons involved in a given parish.

The good news is that Bondel Cemetery has 260 monuments and if all pay on one-time basis the corpus fund would be Rs 26 lakhs yielding correspondingly enhanced annual interest income of about Rs 1.5 lakhs. Even if someone cannot/does not pay for any reason, there is a good cushion to move forward. Please appreciate that this is a voluntary move and one can skip/opt out of the initial one-time payment without having to give any reason. What is projected for Bondel, as an example, holds good for any parish, smaller or larger. It is a matter of scaling up and down. Incidentally, Bondel Cemetery has seen excellent infrastructure development in 2020.

Who will bell the cat? A small committee (of three), with the parish priest in the picture, seems a good start. (In Bondel’s case I would be happy to be involved in that committee). It could receive suggestions and complaints and act on them. It is a great opportunity for people to perpetually honour their dear departed by keeping their graves spic and span – with one-time investment of only Rs. 10,000. Who and how to bell the cat is an open question. (Perhaps, the diocesan Bishops can lead the way!

Going back to the start of this Topic-essay, should we have exclusive burial grounds for priests who toil for their flock day and night? Should they go by the Muslim Mulla’s apocryphal wish not to be buried with the children (parishioners)?

What is said about Christian cemeteries also applies to Hindu smashans and Muslim khabristans.

May our dear departed lie in peace in a clean, pleasant environment.

The subject is open to many views. What are yours? Your response, within 2000 words, is welcome in the format given below. Pl scroll down.

Mulk Raj Anand (1905-2004) was one of the two prominent Indian writers in English dating back to pre-Independence days – the other being R K Narayan. Anand had been educated at Cambridge (1929). His literary works attempted to capture the social realities of British India in the language of the colonial masters. His books include Untouchables and Coolie. 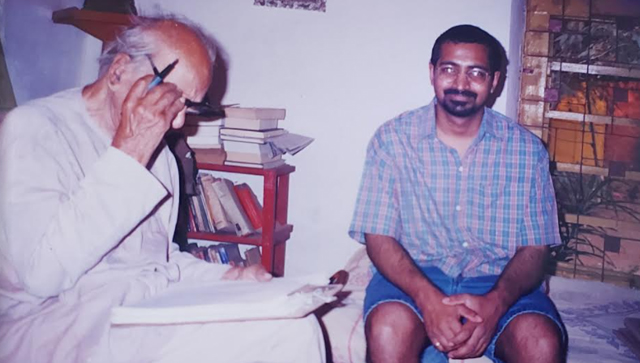 Now enters John Monteiro who, while working in Bombay, had a 3-acre farm at Kamshet, two stations ahead of Lonavala – a crowded hill station. My late wife, Lynette, and I would go to the farm at week-ends every fortnight. Bored of sitting in the deserted farmhouse, we used drive to Lonavala-Khandala for time-pass. Before long journalist John found out that Anand was resident on a large property abutting Bombay- Poona highway and hesitantly approached his kuteer only to be warmly welcomed by the writer. We visited him a few times more.

Then a friend, visiting our farm-house, urged us to take him to meet Anand. Welcome over, our friend gushed about Anand’s books who responded by asking which books the visitor was talking about. Our friend was tongue-tied.

After a while, Anand said: “If you don’t know the title of the book, there is no point in talking”. End of visit. The moral of the story is: If you don’t know, keep your trap shut.

We continued to visit Anand as reflected in the photo alongside dated March 1999 where my son-in-law, Kevin D’Sousa, is seen sitting on Anand’s bed in his kuteer.