Did Elite School Teachers Have to Crawl to Protect Their Fat Salaries?

“The true teacher defends his pupils against his own personal influence. He inspires self-trust. He guides their eyes from himself to the spirit that quickens him. He will have no disciples.” - Amos Bronson Alcott (1799-1888), an American teacher, writer, philosopher and reformer.

Elite private schools, often sporting “International” prefix to their names, have a predominance of well-groomed teachers operating in a cocoon and class of their own. Their comfortable career, protected lifestyle was disrupted and exposed by Corona-19 pandemic for the better part of 2020 and the normalcy is yet to be restored. In the meantime, some of the teachers lost their jobs and others had to accept cuts in their premium salaries/perks or risk unemployment.

A new element entered the scene in Karnataka, for instance, with agitation for cut in school fees on the ground that when schools were closed and online classes came on the scene, the school infrastructure was not used by the students. This was accepted by the government – the arbitrator in this case – which ruled that the school managements should reduce fees by 30% for the current academic year. The elite school managements played their trump card with getting school teachers on the road in a massive demonstration against the government’s fee-cut dictat. 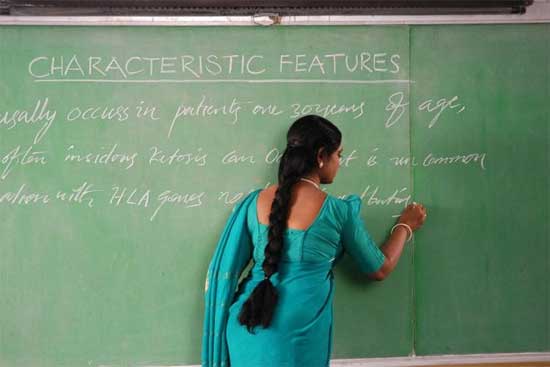 One should start with a bit of background. The online classes were an emergency exigency and involved setting up of online equipment in the restricted space of urban residences. Unlike in the class-rooms where the teacher was the boss of all she surveyed, at the home-end, under the online class regime, they had no control at the receiving end. In many cases, the home members became judges and juries in respect of teachers who were new to the online regime. So, specially the helicopter mothers, hovered over the online receiving scene and worked on an oral commentary on the diction and delivery of the teachers in family conclaves which would perforce or innocently, include the student as well. This, chronologically, is the first ‘exposure’ of teachers.

The second ‘exposure’ concerns teachers joining the management against their students and their parents. Ultimately, theirs is the hand that feeds the teachers whereas school owners are only intermediaries. To this extent teachers have surrendered their moral high ground or been bullied and blackmailed by managements, to be pawns in the money-grabbing game.

Refusing to be persuaded by the government to accept a cut of 30% in the annual fees, the private managements have taken the matter to the court which will take its own time and as and as when the judgment is delivered and if it goes against the management the “Appeal” route is open to them.

Meanwhile, in a parallel move the managements are playing the “tiring out” game with the parents with children as pawns as reflected in the following media headlines and quotes from the related reports.

“Parents of a class 9 student accused a private school of not letting their child write an axam as they paid only 70% of the tuition fees as per government rules….The father added: “Can you imagine the mental trauma for my daughter? No child should go through this…” The school denied this and said the girl can take the exam anytime, provided the parents paid the fees”

Another report was headlined:

50% fees paid, kids made to stand out

Elsewhere there were reports that school managements using teachers to pressurise parents to make full payment of fees.

This is a far cry from the guru-shishya parampara or tradition of ancient India where payment to the teacher took the hindmost. In the current Karnataka situation, the teachers seem to have forgotten their trusteeship role towards their students in favour of ensuring their own fat salaries and perks.

Post-Indira Gandhi Emergency, LK Advani had famously said of some spineless journalists who when they were asked to bend, they crawled. We cannot understand or visualize the fears and compulsions that drove/drives teachers of elite school to crawl rather than bend – leave alone losing the respect and trust of their students. For instance, they may have to mind their old parents who may be totally dependent on them. Their own spouses may be jobless or incapable of getting and holding their jobs. Then, they may have to think about their own growing children and their quest for good education.

The subject is open to many views. What are yours? Please send your response in the format given below (Pl scroll down).

Then the water level reached the mother monkey’s nose. Quickly it dislodged its baby from its head and used as a ballast, under its feet to keep the mother’s nose above water. The scientists immediately cut off the water intake and drained out the water.

The mother monkey and her daughter lived happily ever after.

Do you see any parallel?

Title: Did Elite School Teachers Have to Crawl to Protect Their Fat Salaries?