“Language is a city to the building of which every human being brought a stone.” – Ralph Waldo Emerson (1803-1882), US essayist and poet.

The latest stone for the Konkani City, concentrated on the west coast of India but thinly spread across the globe where the adventurous Konkanis have settled and flourished. Their hearts beat for their Maigao and Maibas. Prominent among them is Dr. Mohan Prabhu from Ottawa, Canada (hereinafter Dr. Mohan). His journey from Kankanady, Mangalore to Ottawa via, Bombay, London to earn degrees and practice law in itself makes fascinating reading. But, he has requested me to focus on his latest novel book offering, for the first time, to self-learn Konkani which is path-breaking and, thus, I would rather start with his new book except to say Dr. Mohan has taken time to write and publish this book, titled KonKanKit Poilen Pustak – Teach Yourself Konkani, as he journeys through his nineties. 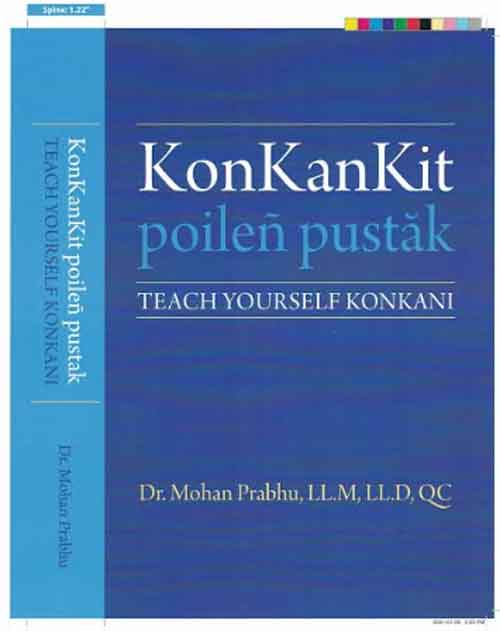 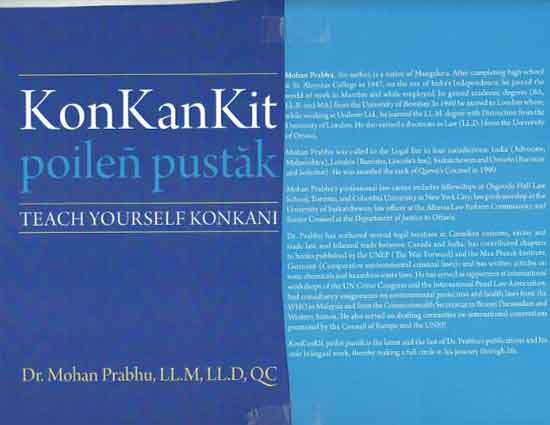 Two points are made at this stage. As Roman script is used for Konkani, anyone knowing that script will be able to follow the book. Secondly, despite being in the West for six decades, Dr Mohan has not forgotten his Maibas that he learnt on his mother's lap and was fluent in it during his early years. Thereafter, after moving to Mumbai in 1947 he seldom had opportunity to speak, leave alone write it.

The new book is well analyzed by two Foreword writers who seem to be in love with Konkani and are admirers of the writer. I quote in the order of their Forewords in the book.

For a language like Konkani, with lot of variances either region wise or community wise, learning it has been a dynamic and open ended task which could perhaps end up only as a life-long effort if one can enjoy. A learner would feel happy if a handbook or a Primer is available for a self-study of a language. Not many have been fortunate enough to learn Konkani as a language within the four walls of a class room. Here comes the relevance of a guide that leads a learner through different stages of progress in learning Konkani language, and Sri. Mohan Prabhuji has been successful in preparing such a nice guide.

Sri Prabhuji has admitted at the outset that his book is intended to learn Konkani through Roman script and that explains the very approach followed in the book. In order to achieve correct pronunciation he has adopted I-TRANS rules rather than diacritical marks. Therefore this work helps to learn Konkani through English, which would help a sizable number of beginners. It is interesting to see the methodology followed in this Primer – as a first step, 12 lessons are drawn up from daily outine. This ensures familiarization of words and their contextual usage, supported by simple glossary, grammar and questions that ensure appropriate comprehension of each lesson. And as a second step, 10 little tales are provided leading to enhanced word power. With a few questions to answer at the end of each story, the learner can not only recollect the story but can also reaffirm his or her word power through Vocables.

The overall approach, content and the methodology adopted while designing this Primer makes it a welcome addition to one’s collection.

My best wishes and salute to the author. By publishing this work World Institute of Konkani Language has added yet another feather in its cap.

This primer, laboriously and lovingly produced by Dr. Mohan Prabhu will definitely help us regain our vocabulary and mastery over Konkani. Dr. Prabhu has used Roman script as majority of us are familiar and comfortable with this script. He has used daily chores, short shlokas and a few popular stories to teach this language. This primer can no doubt not only help us teach Konkani to our children either at home or in the schools, it can also help us improve our skills.

Congratulations and thank you Dr. Prabhu.

As I promised earlier, I now offer highlights on Dr Mohan Prabhu.

Dr.Mohan, the author, is originally a native of Mangaluru. After completing high school at St. Aloysius College in 1947, he joined the world of work in Mumbai and, while employed, he gained academic degrees (BA, LL.B. and MA) from the University of Bombay. In 1960 he moved to London where, while working at Unilever Ltd., he earned LL.M. degree with Distinction from University of London. After migrating to Canada, Dr. Mohan also earned a doctorate in Law (LL.D.) from the University of Ottawa. He was awarded the rank of Queen's Counsel in 1990.

Dr. Mohan has authored several legal treatises. He has served as rapporteur at international workshops of the UN Crime Congress and the International Penal Law Association; had consultancy assignments on environmental protection and health laws from WHO in Malaysia and from the Commonwealth Secretariat in Brunei, Darussalam and Western Samoa.

KonKanKit, Poileñ Pustak, under review here, is the latest, and may not be the last, of Dr. Mohan’s publications and his only bilingual work, thereby making a full circle in his journey through life.

Dr Mohan would be thanked and praised for opening the door for learning and fraternizing for linguistic novices with their lost roots and Maibas. In the context of the unrelenting march of COVID 19 learning a new language may not be the top priority for many. On the other hand, the book can provoke a new creative interest and beat off Corona. There is hope at the end of the tunnel.

Finally, it is notable that Dr Mohan’s collaborator in Canada has been prominently projected on the front cover of the book itself as “ed by Sri Pundalik U Prabhu, B.Sc., MS,P. Eng. (Rtd.).How generous in sharing credit!

The subject, a learning opportunity in the backdrop of Corona, is open to many views. What are yours? Your response may be posted in the format given below. (Pl.scroll down).

While on Dr. Mohan’s book, it is interesting to recall an incidence of a Brahmin family which went to view a girl for their eligible bachelor son. One of the attributes such eligible boys should have is familiarity with literature because in the olden days that was the hallmark of Brahmins.

While on the bride-viewing mission, the young aspirant had to show his literary prowess. The bride-hunting young man was apparently not literate; but was tutored by his elders to give a “good” or “very good” verdict on books referred for his opinion.

In the midst of this charade, the targeted bride’s younger brother presented a ruled exercise book and awaited his opinion which turned out to be “Very Good”.