“The love of family and the admiration of friends is much more important than wealth and privilege.” - Charles Kuralt (1934-1997), a leading American journalist.

“Now and then it's good to pause in our pursuit of happiness and just be happy.” - Guillaume Apollinaire (1880-1918), a French writer considered one of the foremost poets of the early 20th century.

Wealth well directed can deliver happiness and unbridled greed can deliver doom. The latter is reflected in two stories I recall from my primary classes. First, the stories.

The son of a wealthy man, like in the story of the Prodigal son in the Bible, pestered his father to give him the part of his vast property. Fed up of his constant demand, the father called his son: “Tomorrow at sunrise you start from my front gate and take a semi-circle through my vast property and reach my gate at sunset and whatever ground you cover before sunset will be yours.”

Next day the son started at the gate, made a largest possible semi-circle to reach the starting point before sunset. The sun was sinking. He increased his speed. Even as he could see the gate of his mansion, he collapsed of exhaustion and died. 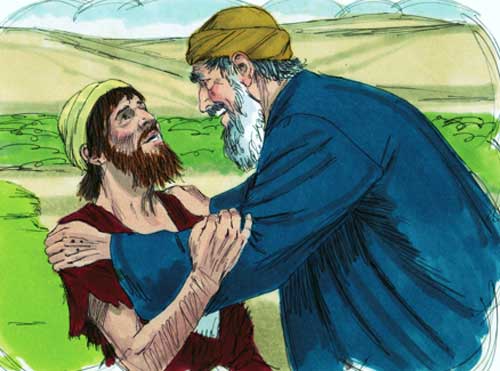 An artist's work on the Parable of the Prodigal Son

In a similar case of greed, when a daiva asked for a boon, our greedy man asked that anything he touches should turn gold. The request was granted. He wanted to celebrate his boon. He organized a grand party. When the bar was opened, he was served the choice liqueor, the glass and the drink turned gold. That happened when he was served the delicious food. He died of starvation.

This topic-essay for my fortnightly column was triggered by a report which I trim and present below.

People are actually using money to buy time by hiring a cook or even a cleaner so that they have time to do things for themselves.

Can we buy happiness? A group of researchers believe so!

But there’s a catch - what you’re actually buying is time.

New research has found that spending money to buy free time, such as paying others to cook or clean for you, does improve happiness, leave you feeling less stressed and generally more satisfied with life.

“Around the world, increases in wealth have produced an unintended consequence: a rising sense of time scarcity,” write the authors of ‘Buying Time Promotes Happiness.’

“We provide evidence that using money to buy time can provide a buffer against this time famine, thereby promoting happiness.”

To reach this conclusion, the researchers questioned a total of 4,500 people in the U.S., the Netherlands, Denmark and Canada about their levels of time-related stress, their life satisfaction and whether they spent their money on material goods or time-saving purchases.

The results found that the 28 per cent of people who reported spending money on saving time were more satisfied with their lives than the others.

Next, the researchers asked 1,800 Americans similar questions and found that 50 per cent of the respondents who had made such purchased also reported greater happiness.

Finally, an experiment in which 60 Canadians were given $40 to spend on a weekend found that the time-saving buyers reported feeling more positive at the end of the day compared to those who purchased a material good.

“If there’s some task that just thinking about it fills you with dread, then it’s probably worth considering whether you can afford to buy your way out of it,” one of the authors of the paper, told New York Times.

But, despite the benefits of buying time the research found that many of us choose not to allocate discretionary income this way, even when we can afford it.

“Despite the potential benefits of buying time, many respondents allocated no discretionary income to buying time, even when they could afford it: just under half of the 818 millionaires that we surveyed spent no money outsourcing disliked tasks,” the authors noted.

This, they believe, is because of the ‘cult of busyness’ – an ideal which sees people favour a diligent work ethic over paying someone for a task in fear of appearing lazy.

The subject is open to many views. What are yours? Please give your response in the format given below. (Pl scroll down)