“Greed is a bottomless pit which exhausts the person in an endless effort to satisfy the need without ever reaching satisfaction.”- Erich Fromm (1900-1980), German social psychologist.

Greed, often combined with betrayal, can be deadly as reflected in the case of Judas who identified Jesus to his enemies with a kiss for 30 coins. When he realized the gravity of his action, he tried to return the coins to those who had hooked him for the job. His hirers refused to accept the coins which Judas threw back at them and ran away and committed suicide.

Greed and betrayal are living entities 2,000 years since then even in the animal world as reflected in the photo alongside. But, first a bit of background about it.

Photojournalists capture images that tell a story more powerfully than words. This is reflected in the photo alongside that won for Kevin Carter the 1994 Pulitzer Prize for Photography.

Carter, a free-lance photographer, was among a group of passionate and idealistic young South African photojournalists. In the village of Ayod in Sudan, Carter photographed masses of starving people at a feeding station. Overwhelmed by the endless misery he saw, Carter wandered away from the feeding station. Following sounds of soft whimpering, he came upon a tiny Sudanese child, emaciated from starvation, crawling toward the feeding center. Carter decided to photograph the child. As he was doing so, a well-fed vulture landed a few feet away and began to stalk the child. Carter photographed the vulture stalking the child for several minutes, patiently hoping that the vulture would spread its wings, thereby enabling Carter to get a more dramatic shot. It did not and Carter eventually shooed the bird away. He sat beneath a tree and cried, watching as the child continued to struggle toward the feeding center. 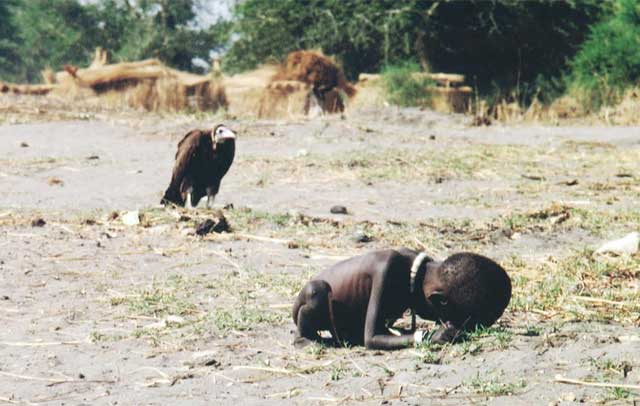 Carter's powerful image became an immediate symbol of Africa's desperation, and won Carter the 1994 Pulitzer Prize for Photography. Some hailed Carter's photo as a powerful catalyst that triggered world response to the famine in the Sudan, resulting in raised awareness and substantial contributions for famine relief.

Now, in the midst of Corona’s carnage in India we have inhuman vultures who prey on the misery and helplessness of victims of Corona dying of the disease and even of fear of it. How the ruthless greedy exploit the victims and their minders is daily fodder for our print and electronic media and the readers of this column cannot be strangers to the greedy exploitation of the helpless, and often poor patients and their loving minders. Here are some excerpts from the plethora of media coverage on the subject.

Watch out for the Covid rip-offs

When social media morphed into a Covid-19 war room in the last few weeks with people trying to crowd source oxygen, plasma and life-saving drugs, fraudsters skulking in the digital shadows latched on to prey on people’s desperation.

The modus operandi is similar to the liquor delivery and fake e-tailer scams operating through social media platforms where fraudsters float their phone numbers in the name of known shops. When people call, they’re asked to make an advance payment, online. And that is where the trap lies.

Once the payment is made, the scamsters switch off their phones and promptly disappear. Only this time it’s not a fake wine and dine bluff but a rip-off that could cost a human life. Kanika Saxena from Mumbai, who was fleeced off Rs 18,000 by a certain ‘Ajay Agarwal’ posing as a distributor of a leading pharma company, calls these scamsters the lowest scum of the earth.

“I was desperately trying to source six Remdesivir injections for a critically-ill friend in Gurgaon so I didn’t think twice when asked to pay in advance only to find out after 12 hours of trying to reach him that I’d been cheated. The patient passed away in the next three days and I haven’t been able to shake off the feeling that I could have been responsible for delaying treatment,” says Saxena.

Harish Baijal, DIG, Cyber Security Maharashtra Police, says the Covid scam is the flavour of the month. “Uncertainty and distress have forced people to let down their guards. While we’re trying to spread awareness it’s difficult to keep a tab on the dissemination of information on social media,” said Baijal.

The police have started cracking down on the growing black market for cylinders and concentrators as India runs out of oxygen. In the first week of May Delhi Police seized 170 oxygen concentrators being sold for Rs 95,000 each. Authorities also recovered 628 Remdesivir vials and 185 oxygen cylinders along with Rs 8 lakh cash from one accused in UP.

Cyber fraudsters are laying new traps in these gasping times. They are cheating prospective oxygen buyers.

These are miniscule of the inhuman vultures cheating the vulnerable relatives of Corona victims hanging in hope between life and death.

It is not that all those who are cheated are loaded with money to spare. Many beg and borrow to save the lives of their loved ones.

The subject is open to many views. What are yours? Your response is welcome in the format given below. (pl scroll down).

Vultures have their uses. In Bombay where the benevolent Parsees live, on death, after funeral ceremonies in funeral parlours (bungles), the corpses are left on the Tower of Silence on Malabar Hill to be eaten by vultures. Now, with high-rises increasingly dominating Malabar Hill, the vultures are bidding good-bye to the Tower of Silence - creating a problem for Parsees.

Vultures have their uses in the rural settings also. Farmers leave their cattle at dawn to graze in the forest. Occasionally tigers kill them. The farmers would miss them if they don’t return to the shed by sunset. But, there was no way to find the missing cow at night.

Then, in the morning, vultures would swoop down on a spot where the cow, killed by the tiger, would be eaten by the vultures. The farmer would visit the spot, confirm the death of his cow and bid it a tearful farewell. Thus, the vultures become dead cow locators. (More on this next fortnight).