Should, or Would, Home-makers be Paid?

Let us sit and mock the good housewife Fortune from her wheel, that her gift may henceforth be bestowed equally. I would we could do so, for her benefits are mightily misplaced, and the bountiful blind woman doth most mistake in her gifts to women.
- William Shakespeare (1564-1616) English dramatic poet in As You Like It.

The latest elections in some States resurrected the subject of compensating women for holding the home-front. Parties in Assam, Kerala and Tamil Nadu dangled the carrot of wages/pension for home-makers if voted to power. The subject which was on the backburner these past years suddenly found new life –especially in the media. Delhi-based Outlook weekly made a cover story on the subject (April 19, 2021), the lead story being written by Jyotika Sood and Lola Nayar, and selectively and briefly excerpted here.

Explaining her giving up a lucrative job, Gurgaon-based Ritu Lall after her daughter was born, says: “It’s out of love and affection for them (family) that I decided to give up my job. It is their appreciation that keeps me going and to reach another level. . . A salary would break the bridge that I have with my family…” 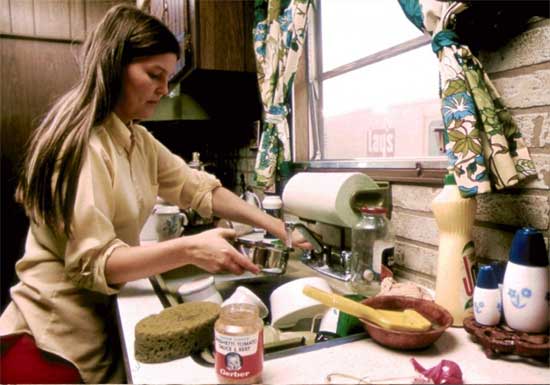 Globally there has been a campaign since 1970s highlighting the need for women to be paid wages or compensation for homework as a means to help them to emerge from poverty and dependence. During UPA-II government, Krishna Tirath, then Union Women and Child Development Minister, had initiated discussion on how to quantify and remunerate the work of homemakers by their spouses. According to her, “A homemaker is a house engineer and ensures everything is in place and available when required.”

Tamil superstar Kamal Hassan was among the first during the recent election campaign to promise monthly fixed salaries for homemakers. Commending this, Shashi Tharoor, MP, said: “I welcome the idea of recognizing housework as a salaried profession…with the state government paying monthly wage to homemakers. This will recognize and monetize the services of women homemakers in society, enhance their power & create near-universal basic income.”

Renana Jhabvala, president of SEWA Bharat, representing self-employed women, says: “It could be a small amount of money that could be given every month to act as a floor income… It would act as good social security system and prevent them from sinking further and becoming desperate to take work at exploitative rates.”

Incidentally, the judiciary has been putting a monetary value on women. For instance, in December 2020, a Motor Accident Claims Tribunal cited a Supreme Court ruling to award compensation of Rs 17 lakhs to the husband and two minor children of a 33-years-old woman killed in a car crash in Maharashtra.

We started with Shakespeare on women. Now we conclude with him on the same subject.

I will be master of what is mine own;
She is my goods, my chattels, she is my house,
My household stuff, my field, my barn,
My horse, my ox, my ass, my anything;
And here she stands, touch her whoever dare.
- Shakespeare in Taming the Shrew.

The subject is open to many views and in the context of two time spans – Shakespearian time and today. What are yours? Your response is welcome in the format given below (Pl scroll down).

Thursdays in Mangaluru are power-cut days apparently for maintenance reasons. Since I had used-up my Jio internet quota for the day I was stuck and had to satisfy myself with counting the number of fortnightly topics I had published on this website courtesy Daiji elders and the latest figure is 21.This figure is significant in many ways including marriage for males.

But, there are age barriers beyond 21 for various reasons. For instance, many decades ago one needed “Health Permit” to buy/consume alcohol at home or pub (which was then called “Permit Room”). You had to apply for a health permit with a recommendation from a doctor and you had to be 40 years or older.

Armed with such a recommendation letter, I Q’ed up at the permit-giver’s window at Old Customs House in downtown Bombay. In front of me was a middle-aged person who submitted his papers. The clerk looked at the papers and the applicant and asked: “Are you forty?” The applicant said: “What do you think is my age? The clerk replied: “You look fifty”. Apparently upset, the permit seeker responded: “For your information I would be forty in six months.” Clerk: “Then come back after six months with your fresh application”.

Who said “Silence is golden” or “Hold your tongue”?

Title: Should, or Would, Home-makers be Paid?