Is Tulunadu in Mass Amnesia About its Benefactors?

“Gratitude is not only the greatest of virtues, but the parent of all the others.” - Marcus Tullius Cicero (106-43 BC), Greek philosopher who was considered the greatest orator of the Roman Empire.

The opposite of gratitude, ingratitude, is the greatest evil which is not uncommon all over the world and nearer home in Tulunadu. On outstanding example of this comes from our own Tulunadu as reported in Daijiworld (13/3/22) and excerpted here.

The city corporation seems completely oblivious to U Srinivas Mallya, the man who contributed immensely towards boosting the development of the city. The Mangalore City Corporation (MCC) has not announced the award instituted in his name for the past three years.

Corporation had instituted an award in 2017 in the name of Ullal Srinivas Mallya, renowned as the builder of modern Mangaluru -‘Srinivas Mallya Award’. When Congress was in power in MCC in 2017, the then mayor of Mangaluru, Kavita Sanil, had organized a sports meet for the members and staff of MCC and had given away the maiden award at the Townhall. Later, the MCC administration was taken over by the BJP. 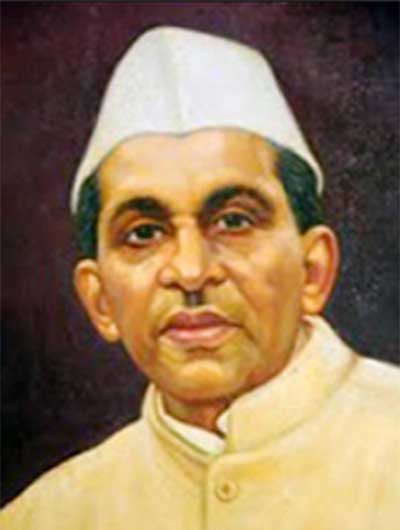 The maiden Srinivas Mallya award was conferred on international saxophonist Kadri Gopalnath for lifetime achievement in 2017. In 2018, the award was given to senior doctor Dr B M Hegde. However, from 2019 to 2021, MCC has not announced this award to anyone. This clearly shows the negligence on the part of the current MCC administration run by BJP.

Srinivas Mallya was instrumental in initiating various projects for the city like Mumbai-Kanyakumari highway, city railway station, AIR centre, Bajpe airport, Panambur port, Fertilizer factory, Town Hall and many more. He was a model politician who paved the way for the modern city of Mangaluru. It is really sad that the MCC has forgotten such a great personality.

Going beyond this righteous rage I give below a factual report on US Mallya written after years of desk work and footwork interviewing people who knew him first-hand – and first published at the turn of this century in an English daily which is now extinct.

We are now daily witnessing the landing of international flights at Bajpe Airport. New Mangalore Port has been berthing luxury cruise liners. The Hassan-Mangalore railway line, now converted to broad gauge, is a daily reality. The Karnataka Regional Engineering College, now renamed the National Institute of Engineering Technology, is a thriving centre of engineering education and research. Frequent buses cover the distance between Kasargod and Kundapur within four hours. One common link among the above is Ullal Srinivas Mallya, who lives on through the projects he helped to launch and execute in the undivided South Canara district from the dawn of India’s Independence.

But, he is a near-non-entity to the new generation and a fading memory even for the old generation. After his birth centenary was celebrated in 2002, there are low profile meets to mark his death, as was done on December 19 in Mangaluru to mark his 52nd death anniversary. It was organised by World Konkani Bhas Ani Sanskriti Prathistan – World Konkani Centre. The Centre’ President, the late Basti Waman Shenoy, had noted that Mallya’s “great service is known to older generation and measures should be taken to ensure that the future generations also know about him”. At this function, the then Mayor Kavitha Sanil announced that MCC was planning to erect a statue of Mallya in front of the Corporation building in recognition of his contribution to the city. A DVD comprising Mallya’s rare photographs and stamps on him were released at the function. It is against this background that a recall of Mallya and his work is relevant and is attempted here – for the current young generation.

These days, people talk about “walking the talk”, but Mallya never talked. During his 18 years in parliament, he did not make a single speech, but silently observed the proceedings from the backbenches of the Lok Sabha. That was his style of functioning. He lobbied for the projects in Tulunadu with those who mattered. These included the likes of Jawaharlal Nehru, Lal Bahadur Shastri and Kamraj Nadar.

Mallya, one of the five children of Ullal Manjunatha and Saraswati Mallya, was born on November 21, 1902. Studying up to Std. VIII at St. Aloysius College, he switched to the Canara High School, from where he finished his SSLC. Then he joined Government College to do his Intermediate. But, at the age of 18, Mallya, already attracted to Gandhiji and the freedom struggle spearheaded by the Congress party, plunged himself into the freedom movement- turning his back on further education and the flourishing family business at Bunder. He faced police lathis and jail terms many times over. To avoid these and work for the cause, he went underground. He is said to have been master of disguises in his quest to escape capture. For instance, once he took shelter in Bombay in the house of an influential relative. On a tip-off, the police surrounded the house to capture him. Sensing the situation, Mallya dressed himself as domestic servant and busied himself mopping the floor. As the police went in to arrest him, he left the mopping and slipped out of the exit door that he had reached in the process of mopping.

In national politics Mallya was very powerful and influential as a member of the Working Committee, and General Secretary, along with Lal Bahadur Shastri. He was also the Chief Whip of the Congress Party in Parliament – a position no one in this region has held since his time. Mallya was close to Nehru. He was a decisive voice in the Regional Congress Samithi and was considered a kingmaker in the State. At the Central level also, state leaders who had any business with union ministers, including Prime Minister Nehru, used to first meet Mallya to facilitate the meetings. In North India he was called Mallayya – big daddy. In those days there was a saying that if Congress put up a lamp post as a candidate for election, it would win hands down. But, Congress tickets were hard to come. Mallya had a crucial role in selecting candidates and was much sought after.

To appreciate the impact of Mallya’s work for coastal Karnataka, one has to visualise the state of the pre-Independence communication infrastructure. Because, in the absence of bridges, a number of rivers had to be crossed by ferryboat, travel between Mangalore and Kundapur took 36 hours. Mallya dovetailed National Highways 17 and 42 in the first and second Five Year Plans and bridged all the rivers en route, enabling today’s fast travel –and covering the distance in two hours. Other projects credited to Mallya include the Akashvani Station in Mangalore, the airport at Bajpe, the Mangalore-Hassan Railway, the Karnataka Regional Engineering College, the all-weather New Mangalore Port, Mangalore Chemicals and Fertilisers Limited and the Town Hall on Nehru Maidan.

Each of these has an interesting story behind it in terms of Mallya’s involvement. For instance, when he came to know that Lal Bahadur Shastri, as Union Education Minister, was planning four regional engineering colleges in the country, Mallya went to him and persuaded him to have one in South Canara. From Delhi, he contacted V.S.Kudva of C.P.C and Chief Engineer M.L. Shrestha and had temporary sheds put up at Surathkal. He told them that he would bring Shastri to inaugurate the college within 15 days – and he did. When the Circuit House was being constructed at Kadri, he discovered that the blueprint did not have provision for the public to wait. While the officials tried to put him off, saying that any change in the plan would mean new sanctions and delay, Mallya asked them to include the waiting lobby in the amended blueprint and took it himself to Bangalore and got it sanctioned.

When the sanction for the Bangalore-Hassan Railway was in doubt, Mallya sent a telegram to Lal Bahadur Shastri, then Railway Minister, threatening to go on an indefinite fast in front of Parliament House, prompting Shastri to sanction the project immediately. When work on the new Netravathi road bridge was stalled for lack of cement, Mallya got Delhi to dispatch two wagon-loads of cement to keep the work going.

Mallya got Bajpe airport sanctioned and got Nehru to inaugurate it in 1952. There is a poignant footnote to this. In January 1965, Mallya was getting ready to fly to Mangalore from Delhi. On the way to the airport, he suffered a heart attack and was taken back to his Delhi residence, where he died. On hearing of his death, the then Prime Minister Shastri, on a tour of Uttar Pradesh, returned from Lucknow and arranged for Mallya's body to be flown to Bajpe airport on a special Indian Air Force flight.

Title: Is Tulunadu in Mass Amnesia About its Benefactors?