Are Assistive Aids for Handicapped only for Insistive?

“My advice to other disabled people would be, concentrate on things your disability doesn’t prevent you doing well, and don’t regret the things it interferes with. Don’t be disabled in spirit as well as physically.” – Stephen Hawking (1942-2018), English theoretical physicist, cosmologist and author.

There is a saying “Don’t kick a fallen dog”. It is a metaphor to describe how a relatively high-ranking person in an organisation or family abuse a lower-ranking person who, in turn, take it out on their own subordinates. When it comes to handicapped and disabled, governments have made laws and rules to protect and help them. But despite these laws and rules, the disabled and handicapped are treated cruelly or shabbily as reflected in a recent (TOI -17/5/22) which highlights that assistive aids remain inaccessible. But, India is not alone in default in this area.

More than 2.5 billion people need one or more assistive products, such as wheelchairs, hearing aids, or apps that support communication and cognition and yet a billion of them are denied access, particularly in low- and middle-income countries, where access can be as low as 3% of the need for these life-changing products, said a report released on May 16, 22) by the World Health Organisation and UNICEF. 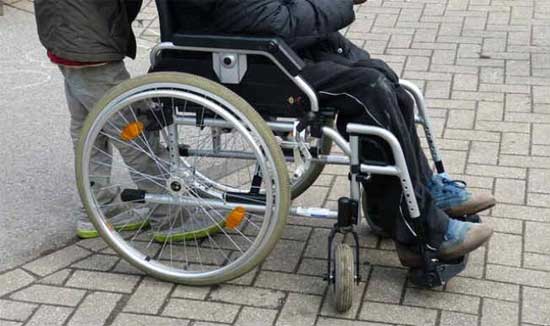 The “Global Report on Assistive Technology” presents evidence on the need for and access to assistive products and provides a series of recommendations to expand availability and access.

Rajib Dasgupta, chairperson at the Centre of Social Medicine and Community Health, Jawaharlal Nehru University is one of the contributors to the report. Speaking about the condition in India, Dr Dasgupta said that the 2011 Census puts the national estimate of the number of people with disabilities at 2.21% of the total population (26.8 million persons), including persons with visual, hearing, speech, locomotor and mental disabilities with the majority in the 19-59 age group. India’s’s disabled population increased by 22.4% between 2001 and 2011 census periods; the total population increased by 17.6% however. The 76th round (July- December 2018) of the National Sample Survey (NSS) reported that among persons with disabilities, 21.8% reported receiving aid/help from the government and another 1.8% from other organisations. Indian government agencies are dedicated towards the cause of improving access to assistive technology. The planning efforts will be supplemented by the recommendations from the global report, said Dr Dasgupta.

The WHO /UNICEF report notes that the number of people in need of one or more assistive products is likely to rise to 3.5 billion by 2050, due to populations aging and the prevalence of non-communicable diseases rising across the world. Also, affordability is a major barrier to access, the report notes. A survey of 70 countries featured in the report found large gaps in service provision and trained workforce for assistive technology, especially in the domains of cognition, communication and self-care.

“Assistive technology is a life changer — it opens the door to education for children with impairments, employment and social interaction for adults living with disabilities, and an independent life of dignity for older persons,” said WHO Director-General Tedros Adhanom Ghebreyesus. He added that denying people access to these life-changing tools is not only an infringement of human rights, but it is also economically short-sighted.

Coming back to India, even with such rights mandated to help the handicapped, a current report headlined “Indigo (airline) ‘mishandled’ passengers: DGCA (Director General of Civil Aviation) with reference to a recent case of the airline denying boarding to a passenger with special needs. This incidence was widely reported in the media and evoked indignation – and needs exclusive featuring in this column another time.

The subject is open to many views. What are yours? Your response is welcome in format given below (pl scroll down a bit). Over to you.

Title: Are Assistive Aids for Handicapped only for Insistive?