Sita had always loved the saree but only as long as it was worn by someone else. Her fond memories of wearing a saree till the age of 23 were only for school and college graduation ceremonies and a few occasions when the college made it mandatory. Any family occasion when all the cousins would decide on wearing beautiful heavy sarees, Sita relied on her humble friend, the Salwar Kameez. She never knew the attire from which she was running away would one day turn out to be her everyday uniform.

After completing her graduation in Commerce, Sita was showered with marriage proposals. A girl with many dreams, she was against the idea of getting married and settling down. But giving in to pressures and family circumstances she decided to enter into wedlock. Sita got married to Charan, a simple hard-working man from a middle-class family who worked as an attender in one of the prestigious banks in the city. 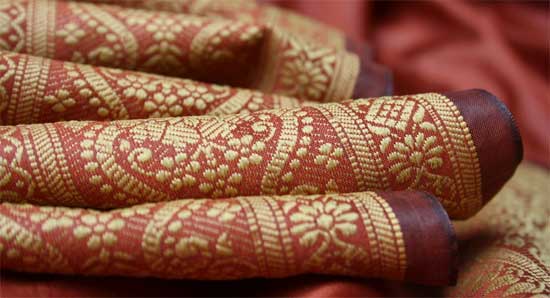 Sita was blessed with more than she could ask for – a wonderful husband, two beautiful kids and a comfortable rented house in the city. During the initial years of marriage, she gave up on her ambitions and concentrated on looking after her family. But deep down she had a desire to shine and stand out from the crowd. Though life was comfortable, Sita always wanted more. Her constant demands for expensive clothing, furniture for the house compelled Charan to take up odd jobs. However, his efforts were not enough to satisfy Sita. After a few arguments, on Charan’s advice, Sita decided to look for a job.

Sita was smart and ambitious but her greatest drawback was her lack of communication skills. She was unable to communicate in English and in order to overcome this limitation she joined spoken English classes. After a good 6 months of training, she was able to speak English, albeit not fluently. She secured a job in of the prestigious schools in the city as a clerk. Sita was happy that her income would fulfil her needs for a better lifestyle and personal grooming. Everything about her life was getting better for Sita except that she was expected to drape a saree for work every day. For years, she had always preferred wearing the Salwar Kameez. Though she had imagined herself in jeans and skirts, she could never bring herself up to wear them. Now, while draping a saree everyday was a nightmare for her, Charan and the kids had a lot of fun watching her struggle.

A month had passed and still Sita could not drape the saree well but had managed somehow. One fine day after a long day at school when she was waiting for the bus at the bus stop, she saw a beautiful lady who had just gotten down from a cab and was heading towards the bus stop. She was elegantly dressed in a skirt and top, her hair tied into a beautiful bun. She looked stunning and carried a big laptop bag with her. Sita guessed that she must be working for a big organization. Sita was mesmerized with this lady and aspired to be like her someday. Just then the bus arrived and when Sita was about to climb the bus, the so-called elegant lady pushed her away from behind, stepped on Sita’s saree and got into the bus. She stamped Sita’s saree so forcefully that the pin which was holding her pallu just snapped and the saree ripped, dropping her pallu down to her worst embarrassment. There were hundreds of people around her witnessing the scene. She also noticed a few college girls giggling. She had no choice but to climb the bus. After gathering the fallen pallu, she immediately tucked it and stood with tears in her eyes. This lady who knew the consequences of her actions did not even bother to apologize and was busy laughing and chatting on her mobile phone. Sita was humiliated, hurt and above all confused as to what to do. She had to get down at a connecting point and board another bus to reach her home. She checked her wallet and she barley had 40 rupees with her which was insufficient for an autorickshaw ride and was totally confused. She thought of calling Charan but by the time he would arrive, her saree would tear completely. Just when she was alighting from the bus, she confronted the lady who pushed her. The lady arrogantly replied, “You should climb fast and learn to manage the saree or else sit at home!” and walked off. Sita was completely taken back by her lack of concern. Her secret admiration for her had crashed.

Sita got down at the connecting bus stop and frantically looked for a place to adjust her saree. After what felt like hours, she saw a ladies’ washroom. She knew that the condition of the public toilet was awful and draping a saree there would be her worst nightmare, but she was left with no choice. Heading towards the washroom which was stinking she hesitated, just then the lady who was collecting money sensed her difficulty and asked her what had happened. Sita narrated the incident to her. The money collector was angry with the lady who had caused Sita’s misery and told Sita not to worry but drape the saree in the washroom. Sita was reluctant to get in as all the toilets were dirty and none of the doors had a latch. But the cleaner assured Sita that she would stand guard at the door and allowed her to adjust the saree. With tears in her eyes Sita started to drape her saree. While she felt disgusted and scared, she folded the pallu neatly to hide the ripped part of the saree. Suddenly, Sita realized that she had no extra pins. Not knowing what to do she peeped outside and asked the cleaner if she had pins. Without any hesitation the cleaner took the pins she had stuck to her mangalsutra and gave some to her. After almost half an hour Sita draped a torn saree perfectly. She stepped out and was pleased to still see that cleaner was still standing guard. She thanked her profusely and handed a 20 rupee note to her which she accepted happily. Sita then walked out of the stinking toilet.

Sita arrived at the platform and when the bus arrived, she took a window seat and began contemplating what had happened. In a span of 3 hours she had learnt so many lessons which life had failed to teach her from so many years. Just a few hours back she admired the lady just because she was well-dressed and spoke fluent English. But her actions proved that the physical appearance and the way they dress or speak a particular language could never complete a person. The real woman for Sita that day was the cleaner in the public restroom. That woman was stinking but had the heart to understand another woman’s misery. She was kind enough to not only sympathise, but also give away the little things she had to others who needed them more.

Finally, that incident taught Sita how to drape the saree perfectly. Even today she drapes sarees, sometimes she still seeks a helping hand but most of the time she drapes it all by herself. Even today when she climbs the bus, she reminisces her short adventure with the saree and her continued affair with it.

By Sonal Lobo
Sonal Lobo, born and bought up in Bengaluru, is a postgraduate in commerce from Christ University, Bengaluru. She has been writing from the age of 10. Her writings have been published in a number of publications of repute. She has published two books 'Thoughts Sublime' and 'Whistling Words' both collection of poems and also contributed in various anthologies. Currently she is working as an HR counsellor in Bengaluru. You can reach her at sonal_chocolate@yahoo.co.in
To submit your article / poem / short story to Daijiworld, please email it to news@daijiworld.com mentioning 'Article/poem submission for daijiworld' in the subject line. Please note the following: