Story after Marriage: With a Drizzle of Coconut Oil and Lots of Pepper

To begin with, I want to dedicate this article to my dear husband – who reads only those articles in which he is mentioned. As for the others, he either chooses to ignore them or makes me read them aloud so that he can continue with his other “important” pursuits. Well, that pretty much sums up my life after getting married.

Since it is Valentine's Day and there is talk of love and red hearts everywhere, I thought this could be my best opportunity to write about this topic. Not often do I venture out to write love stories or anything even mildly related to romance.

Recently as a part of a campaign, my husband and I shot a video of baking a cake, uploaded photos of the cake with wine by the side and a beautiful ambience we had set-up at home. We received a lot of compliments and most of them were “How Romantic!”. Well, the arrangement was indeed romantic but the clutter and the dishes to wash after the episode was more romantic! On a serious note, most of the married couples often complain that at the beginning of the marriage or during courtship period the spouse was so romantic but as the years pass, the romance fizzles out and the married life turns stale devoid of any spark. 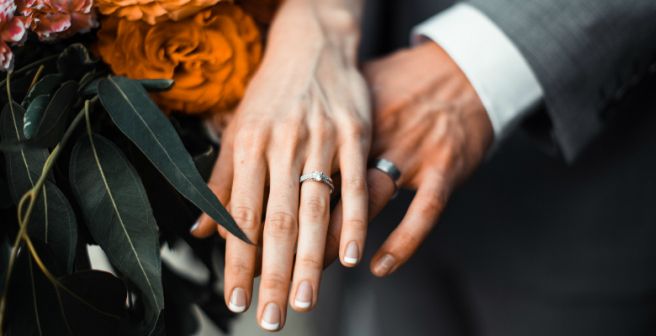 I have also complained a lot and did personally feel, where has all the spark and butterflies in the stomach gone? Slowly I realized that it has completely disappeared. Just like my slim figure and my husband’s four (Six according to him!) packs.

Life after marriage is definitely different. To put it better, it has evolved. Long romantic messages slowly turn into grocery lists. Tight jeans and cocktail dresses are replaced by pajamas. Shea butter cream is replaced by Vicks gel. Soft kisses become formal pecks. Yet we claim that we are in love. Or are we?

I remember one incident, during our courtship period I had slipped and had sprained my leg. My fiancé (now husband) had rushed to my aid and helped me sit. He massaged my leg, applied some ice and had enquired about my well-being a good number of times. Recently, history repeated – I slipped again and landed on the floor in our room. To my utter dismay, my husband was busy looking at the floor instead of me. When I enquired as to what he was doing, he calmly replied that he was checking if the marbles on the floor were intact and they had not broken because of my fall! Well, priorities change! However, afterwards he did lift me and applied a good amount of pain-relieving gel. Nevertheless, there was a huge difference in his reaction. This did make me realize that life after marriage had a lot of chillies but less spice!

Life was different before marriage or even a few months after marriage. We would look into each other’s eyes and smile all day. But now, we are better off looking at our smartphones than look at each other. Before marriage we would speak over the phone for hours and now calls are meant only for important conversations. Before marriage we were longing for privacy, just to steal a warm hug. But now, we prefer some “me” time over “us” time. In the early days of marriage, a kiss was mandatory before going to work and now kisses are restricted to Christmas and Easter wishing. Yet, we proudly claim we are so much in love. Or are we?

While I was planning to pen this article, a series of questions did cross my mind. How would people accept this article? Would they be offended? Am I propagating negative aspects about marriage? But the most crucial question I asked myself was are we still in love?

After pondering for quite some time, I realized, probably “love” is cliché and overrated. What I understood was that we were committed and attached to each other. That is what glued us together when we felt we had fallen out of love.

There are moments in each couple’s life when they feel there is no love between them. But is it true? For most of us in the present generation the definition of love is vastly different. It is romance, vacation, cuddling, intimacy and freedom. Probably we are forgetting the aspects of companionship, trust, transparency, security and dependency. Aren’t we?

I have heard many married couples say, “I don’t want to be dependent on anyone, I am independent”. Well, being independent is appreciated but a beautiful marriage does involve some level of dependency which adds a different flavor to the love. I am dependent on my husband in many ways. I am dependent on him to pick a dress, switching a job or pursuing an interest. I am dependent on him while selecting a piece of furniture and so many other things. These dependencies of the couple make them glued to each other, when each one seeks the other’s opinion there is a level of transparency and this makes way for great amount of trust and compatibility.

I have heard people say, “I want freedom!”. I have also said this many times. What is freedom? When a concerned wife frantically calls her husband to check on his safety, is it curtailing one’s freedom? When a husband who struggles to manage finances, advises his spouse to spend less, is it curtailing one’s freedom. Even today when I wish to buy something, I discuss it with my husband and so does he when he is planning to spend on something. Even today when we make plans to go out or catch up with friends, we inform each other and seek each other’s opinion. It is not controlling; it is being involved.

People grow and change and so does a married couple. As years pass, we mature and so do our thoughts. While love remains intact it is expressed in different ways. Today when I leave for work my husband does not kiss me and say I miss you. But he helps me during the busy mornings and waves a gentle goodbye. Most of our outings today are not long drives. But a short stop over for a glass of wine and some peaceful time. It is not about passionate sex, but long hugs and the reassurance that there is someone sleeping by your side.

I have received tremendous support from my husband. When I planned to switch careers taking a huge risk, he whole heartedly supported me even though we were not financially secure. Whenever I wanted to dedicate time to pursue my interests, he never stopped me nor asked me why. Those evenings when I did not want to cook, he quietly had a bowl of Maggi or some leftover rice. Those times when I did not look pretty and cracked my voice, he smiled and held my hand. What could be more romantic that this? This was more than romance. This was commitment. This was fulfilling the promise we made before God to stand by not only in times of fun and frolic but also in tears and fights.

The greatest test of our marriage was the loss of our babies. When I went through two miscarriages, that is when I witnessed what love was. My husband not only held me close and tight, but in every step, he helped me come out of the pain. His love and care would never permit him to pressurize me for a child till this day. Isn’t this more beautiful than red roses and a bottle of wine?

Each of us have our own struggles in marriage, there are times we scream at each other and wonder why did we have to get into this? We hate to look at each other and wish time just flies. We want to run away far and hide but when it is all over is it not our spouse that we always want by our side?

Seven years of married life is not long but it is not short too. We face new challenges every day. There are arguments, fights, doubts and tears. But it is nothing when compared to the fact that you have been given the most precious gift by God. A friend he sent specially for you. Yes, it is not going to be same. There may not be surprises of expensive gifts. There may not always be a romantic getaway, and each other’s habits may pull us astray.

But the love will always stay. It has stayed for me too. When he helps me in the kitchen, when he arranges the vessels, when he respects my folks, when he discusses his problems and weaknesses, when he lays open his vulnerabilities and issues, when he fights with me to watch Netflix, when he applauds my success, when he cracks a PJ, when he cannot stand to see my tears, when he argues, when he lies to make me happy, when he works hard to secure my future, when he calls me when I’m far away and many such moments remind me every day that this is love.

Though marriage has many aspects, the fact that we are glued together, emits an aroma just like the coconut oil. No matter what ingredients you put in a dish, the coconut oil outshines, just like the love between a couple. As years pass by the spark might disappear but the shine remains. Yes, we will continue to sigh and wonder why. There will be fights and arguments just like pepper but though pepper is spice It is digested well by our body.

Every after-marriage story is not sparkly white but definitely it is tempered with a drizzle of coconut oil and some spice.

By Sonal Lobo
To submit your article / poem / short story to Daijiworld, please email it to news@daijiworld.com mentioning 'Article/poem submission for daijiworld' in the subject line. Please note the following:

Title: Story after Marriage: With a Drizzle of Coconut Oil and Lots of Pepper