Mangaluru, Jul 1: MLA and deputy leader of U T Khader made serious accusation that the BJP government is not supporting him to resolve the sea erosion issue since three years.

Speaking to reporters in the city, Khader said, “I did not get any support from the BJP government with regards to the sea erosion. When our government was in power, we took emergency action when the roads got cut and houses washed away. But after BJP assumed power not a single work is done. If I inquire with the officials they say that they have not got order from above and wash off their hands. 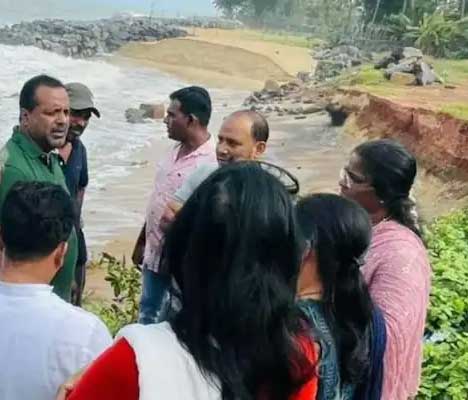 “I appreciate the work of officials in Dakshina Kannada district. But where is district in charge minister Sunil Kumar? He should call a meeting and hold emergency work for rain related issues. Not a single meeting is held by the in-charge minister till now. I have been bringing up the issue of sea erosion for the past 10 days. But DC and district minister do not care at all. They are not bothered to visit the spot and get emergency work done. If stone are put to at least 70 meters, hundreds of houses will be saved.

“The government and district administration is not bothered. It is normal to have natural calamities during monsoon. But to discuss this, monsoon session should be called. But this year, no session is called so far. Where we can highlight the plight of people? Session of assembly should be held immediately to discuss jobs which are not done.

Battappady villagers, who are cut off from mainland, wept with the journalists and said, “No one visits here to listen to our woes. We are paying rent and staying in other houses because of sea erosion. We cannot afford to pay rent in the meagre amount we earn through daily wage work. Government has neither given us rent as compensation nor money to repair our damaged houses.”

The affected villagers further said, “The work of containing the sea by putting stones is not being done. Local panchayat has taken signatures from us forcefully. They are asking us to go to government school leaving our houses. But they are not thinking of putting stones to sea and resolve the matter. Now the road connection is cut and we cannot reach our houses in vehicle. We have paid tax since many years. But when we face issue, no one listens to us.”

Though rain is reduced in Mangaluru, sea erosion is still going on. The velocity of waves is high in Ucchila, Battappady and Ullal sea shore. Road at Battappady is washed away into the sea. More than 30 families are in distress. Waves are splashing at nearby houses. Compound walls of some beachside resorts have also washed away.