Bengaluru, Apr 22: The Papal envoy to India, His Excellency, Most Rev Leopoldo Girelli, who is the Apostolic Nuncio to India, will be paying his first official pastoral visit to the Archdiocese of Bangalore on April 23 and 24.

His Excellency will be on a two-day official visit to Bangalore for the first time since he assumed office as Nuncio to India and Nepal last year. On April 23, Saturday, he will be accorded the official reception and Felicitation Program, followed by His Address to Priests, Religious and Lay Representatives of the Archdiocese of Bangalore at St John's Medical College Auditorium here at 11 AM. 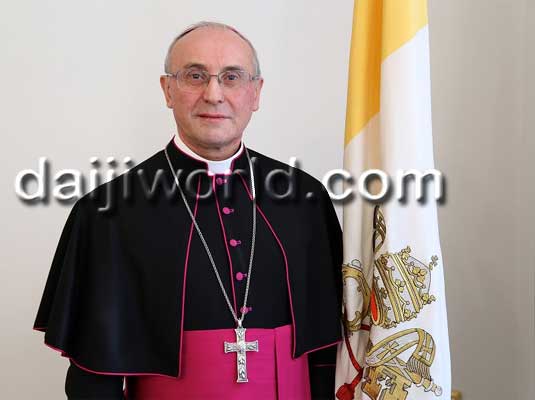 He will be inaugurating, blessing and dedicating new church of St Ignatius Parish, Beguru (close to the Electronic City, Bengaluru) on Saturday at 3.30 PM.

A Solemn Eucharistic Adoration and Benediction followed by a Short Felicitation Programme at Our Lady of Victories Church, Champion Reefs, KGF on Sunday, April 24, at 3.30 PM.

The Apostolic Nuncio, on his way to KGF, will make a brief stopover at the Social Service Centre in Kolar, where the Aids patients are given treatment and counselling.

He will be visiting the St Francis Xavier Cathedral, at Fraser Town, Bengaluru on Sunday at 4 PM and later preside over the Golden Jubilee Holy Mass at the Infant Jesus Shrine, Viveknagar, Bengaluru at 5.15 PM.

Most Rev Leopoldo Girelli was born in Predore, Province of Bergamo, Italy, on March 13, 1953. He was ordained a priest on June 17, 1978 and incardinated in the diocese of Bergamo. He graduated in Theology.

To prepare for the Diplomatic Service, he completed the course of study at the Pontifical Ecclesiastical Academy in 1984. He entered the diplomatic service of the Holy See on July 13, 1987 and worked in the papal diplomatic missions in Cameroon and New Zealand and at the Section for General Affairs of the Secretariat of State, and finally in the Apostolic Nunciature to the United States where he held the rank of Counsellor.