Davanagere, Jan 17: Weekend curfew was in force in the entire state on Sunday January 16 as a measure meant to regulate spread of covid19. This however failed to deter BJP MLA from Jagalur constituency, S V Ramachandra, from celebrating his birthday on a lavish scale in front of his residence here.

The MLA has his house at K B Extension, Davanagere. Shamiyana and dais were erected in front of his house and chairs were laid out for the guests. His fans, people's representatives, officials, BJP workers, and the police attended the celebrations and extended greetings and best wishes to the legislator. Covid19 rules were bypassed with disdain when celebrating his birthday. 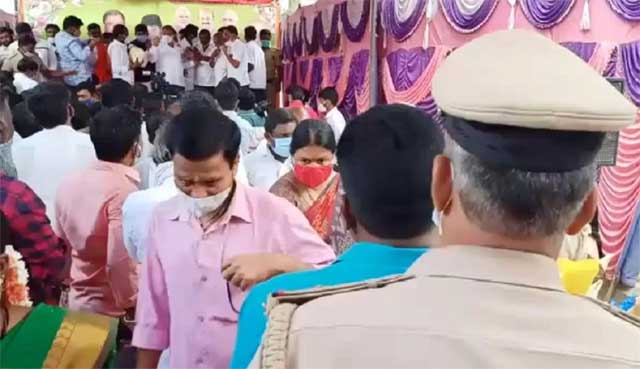 Food was arranged for the people who participated in the birthday celebrations. MLA Ramachandrappa cut the cake and got himself clicked in the company of his close ones. He also addressed the gathering.

Davanagere district which has over 600 active covid19 cases, is witnessing a steep rise in new infections. The officials are struggling to stop the speed of infection. People who are found violating weekend curfew rules are being warned and fined.

In the midst of all these things, the legislator celebrated his birthday in a big way. This has given rise to anger and indignation among the people.

It may be recalled that BJP legislator from Honnali, M P Renukacharya, had recently taken part in a traditional programme of scaring of bulls organized in his constituency, flagrantly violating the Covid rules in the bargain.