Mangaluru, Jul 7: "Ibbara Nyaya, Muvanige Adhaya" says an old vernacular adage which even Kindergarten babes know through the story of two cats who had stolen a ball of butter and could not agree on equally dividing it and call in the fox to handle the situation. The clever fox, while weighing the two portions on the scale, gobbles the extra on one scale and in the process makes the other scale heavier and gobbles a bit from that scale also. The process continues till all the butter is gobbled by the fox and cats are left high and dry to rue their decision to call in the fox. A similar charade is going on in Mangaluru with a third party now getting into the mess concerning naming of a road. In English, it is called fishing in troubled waters. But, first the facts.

Some ex-employees of Vijaya Bank were set to rename the road from Catholic Club at Hampankatta to Ambedkar Circle, via the hill, after their bank stalwart, Mulki Sunder Ram Shetty, while St Aloysius College claimed that it is already named after the college. Because of widespread opposition to the renaming, the government suspended the road naming ceremony which was scheduled for July 2. 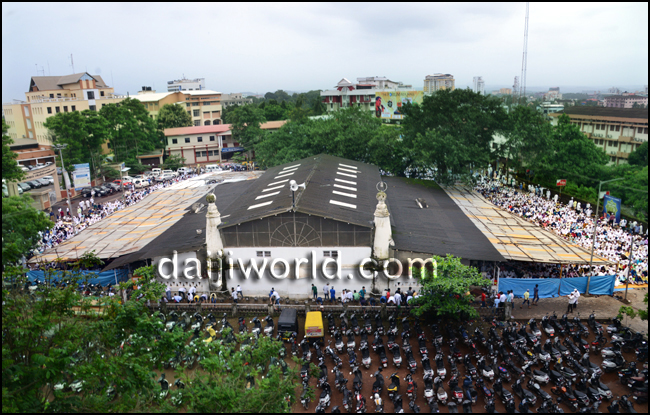 While suspension could have given a cooling of window to find an amicable outcome, in the interim, some Muslim leaders of the district want the road to be named as "Idgah Road". The Dakshina Kannada Muslim Sanghatanagala Okkuta has claimed that the Idgah on top of the hill was older than St Aloysius College and Vijaya Bank.

This calls for some background. The Idgah itself was built after demolition of all Christian churches in Canara, except the Farangipet monastery because its head, Fr Miranda, was a close friend of Hyder Ali), by Tipu Sulatn and according to oral history, the stones from the demolished Milagres church were used to build the Idgah. It takes one back to the captivity of Canara Catholics which I propose to briefly highlight with excerpts from my archives and others – starting with Government Gazetteer for South Kanara edited by John Sturrock (after whom a road is named in Falnir) and Harold A Stuart.

"During this war (Siege of Mangalore)Tipu suspected the Native Christian population of secretly aiding the English and a terrible persecution ensued. Having set guards over the villages in which they resided he seized in one night 60,000 according to his own statement ...and forcibly deported them to Mysore. The sufferings on the way were intense, and only a portion reached Seringapatam, where the men were circumcised and a number of most able bodied selected for service as soldiers. The remainder with women and children were distributed throughout the villages of Mysore.
They remained there till the British defeated Tipu in 1799. The number of those who returned from their 15-year captivity has been estimated at only 12,000. All the lands of Christians were confiscated and the churches destroyed. The few who escaped departed to Malabar and Coorg and remained there till after the taking of Seringapatam in 1799 when they returned, as did the survivors of those deported to Mysore. The number of those which returned has been computed at about 12,000..."

Now some excerpts from my writings for the media retrieved from my computer archives.

"For Canara Christians, Ash Wednesday evokes sad memories. In the siege of Mangalore in 1794, Tipu Sultan vanquished the British. Tipu suspected the native Christian population of secretly aiding the British and a terrible persecution ensued. Having set guards over the villages in which they resided, Tipu’s soldiers seized in one night about 60,000 Christians and forcibly deported them to Mysore. They were rounded up for the captivity on Ash Wednesday on the basis of the ash cross on their foreheads.

"The other landmarks on the hill include the Lighthouse, Idgah Mosque and the District and Sessions Court buildings. The mosque is a quadrangular structure where the Muslims offer Idgah prayers. It is said to have been constructed by Tipu Sulthan towards the close of the 18th century...

"Such a beautiful and historical hill is marred by a few architectural monstrosities. An ugly overhead water tank, close to the Lighthouse, a recent characterless Court building and extensions to the Idgah Mosque are totally in disharmony with the architectural grandeur of rest of the structures on the hill. It is the triumph of utility over aesthetics.

"Starting from 1763 and ending in 1800, the Muslim rulers of Mysore had sway over Tulunadu. In 1763 Hyder Ali captured Bidanur and sacked the city and thus commenced his rule over Tulunadu. On his death in 1782, his son, Tipu Sultan, assumed the throne and ruled until 1800 when he was finally and totally defeated by the British in the battle of Srirangapatanam. While Hyder was a ruler with religious tolerance, Tipu has had a record of persecuting Christians suspecting their loyalty to him and their support to the British.

"He (Tipu) constructed the Idgah mosque on Lighthouse Hill. It is a quadrangular structure believed to have been constructed, according to oral tradition, with stones from the destroyed (by him) Milagres church at Hampankatta. The word Idgah comes from Id, the main Muslim festival, and Idgah is the place for offering congregational prayers on the festival day by the faithful of the region.

"Traditionally the Muslims of Mangalore and surrounding areas offered prayers at the Idgah on Id after coming in a procession from Juma Masjid at Bunder. However, this practice is now extinct or scaled down to avoid the risk of provoking communal disharmony. Also, the heritage value of this structure is marred by modern extensions, including asbestos roofing on steel girders."

Finally an excerpt from the book "Shades and Shadows" by Alan Machado (Prabhu) about the only survivor of the captivity from his clan who returned to his ancestral farm in Omzoor after the liberation:

When Joao, the only survivor of his clan, returns to his ancestral house, somebody else was in its occupation. "All of a sudden, the crashing cascade of memory and emotion overwhelmed Joao.

Tears rolled down and splashed at his feet. His vision blurred and he saw nothing where he stood, alone in a desolate place, beneath the indifferent sky with nothing but silence in between. Joao, the only one to return and remember, the last of his tribe, and the first, on the first day of the first month of the first year of the new century (1800)." At the release function, Alan read passages from his book, and concluded on a note of pathos: "Joao is my ancestor because of whom I am here and this book is here".

Let the saner and enlightened elite of the community restrain the impetuous elements from suicidal adventurism.