Oct 30 (Business Insider): An Indian man fooled everyone into thinking he was on his way to be a top scientist at NASA.

Described as a "news personality" on his Facebook page, 27-year-old Arun P. Vijayakumar said he had been selected to join the US space agency after it relaxed its citizenship conditions, Indian English language paper the Deccan Chronicle reports.

His claims had been excitedly picked up across the country, with Indian newspaper The Hindu running a full interview in 2012.

In it Vijayakumar, who hails from the southern region of Kerala, said how he was "thrilled at being accepted as a research scientist."

He even went as far as talking about studying at prestigious MIT - and was off to explore "extraterrestrial elements with the use of remote sensing" with his revered spacial expertise.

Vijayakumar told the press he had come into contact with US organizations while studying at local engineering college the Bhopal National Institute of Technology.

But his fabrications were outed this week, with the Deccan Chronicle saying he had been "proved to be an imposter" and revealing all. 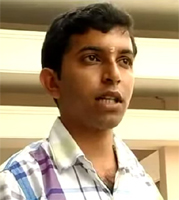 It said the man untied a "bundle of lies" for the news team, having "fooled everyone for some time by claiming to be closely associated with the US space agency."

Manorama Online, based in Kerala, reacted to the findings - and said he was only discovered, amazingly, when Indian Prime Minister Narenda Modi took interest and his fame really took off.

It explains Vijayakumar was then caught by a Facebook Organization known as the "Netizen Police," run by top officials and which investigates online fraud.