Temptation at every stage - Narcotics from source to street

Mangaluru, Sep 25: The complex narcotics trafficking business of production, trafficking and usage is cloaked in secrecy from A to Z in varied geographical jurisdictions and countries. Commencing from the farming operations, there is a highly secretive decision making process deliberating on the modus operandi for money laundering, secret smuggling routes, hostile environments, identifying tight law enforcement areas, vicious competitors and counter narcotics offensive campaigns by vigilant governments .Traffickers have to perform several functions involving reprocessing and repackaging narcotics before it can be distributed in the market.

The source zone is the farmer as the opium plant has long been a lifeline for poor farmers, Afghanistan remains the world's top opium producer as also the largest producer of cannabis in the form of Hashish.The total area under opium poppy cultivation in Afghanistan is expanding, according to a United Nations survey of May 2017 from 183,000 to 201,000 hectares leading to a significant increase in its production. Also, a new strain of genetically modified seed that comes from China, which allows poppies to be grown year round, has lead to a massive 43 percent surge in production last year. According to a separate report from the Institute for War and Peace Reporting, the growth cycle of opium in Afghanistan is now around two months, which means heroin can now be cultivated on a year-round basis.

The income from opium can beat that from conventional crops twelve-fold. The opium is sold through a network of secret traders. The profits are largely reaped at the level of the international wholesale and retail.

There exists a trafficker collection hierarchy in the source zone, the major drug traffickers are backed by powerful business, political and financial interests with links to major criminal syndicates. Making it more complicated is the role of various intelligence agencies that are allied with organized crime, competing for the strategic control over the heroin routes. Further, the multi-billion dollar revenues of narcotics are deposited only in the Western banking system. Most of the large international banks together with their affiliates in the offshore banking havens launder large amounts of narco-money.

There is also a hierarchy of prices, from the farm gate price in the producing country, upwards, to the final retail street price. The latter is often 80-100 times the price paid to the farmer. This is because the opiate product transits through several markets from the producing country to the transshipment countries to the consuming countries. In the latter, there are wide margins between “the landing price” at the point of entry, demanded by the drug cartels and the wholesale prices and the retail street prices, protected by organized criminal gangs. The retail value of the trade is ultimately the criterion for measuring the importance of the drug trade in terms of revenue generation and wealth formation. Retail prices vary considerably within urban areas, from one city to another and between consuming countries, not to mention variations in purity and quality. These proceeds accrue to business syndicates, intelligence agencies, organized crime, terror organizations, financial institutions, wholesalers and retailers, who are involved directly or indirectly in the drug trade.In turn, the proceeds of this lucrative trade are ultimately deposited in Western banks, which constitute an integral mechanism in the laundering of dirty money.Only a very small percentage accrues to the farmers and traders in the producing country. 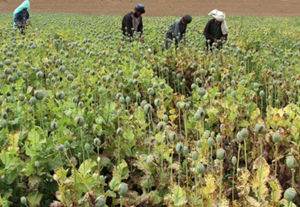 The proceeds of the drug trade are laundered through numerous offshore banking havens around the globe. It is here that the criminal syndicates involved in the drug trade and the representatives of the world’s largest commercial banks interact. Dirty money is deposited in these offshore havens, which are invariably controlled by Western commercial banks. Once the money has been laundered, it can be recycled into bona fide investments not only in real estate, hotels, etc, but also in other areas such as the services economy and manufacturing. This illicit money is also funneled into various financial instruments including the trade in derivatives, primary commodities, stocks, and government bonds.

The powerful and invisible financial interests behind narcotics are supported by the militarization of the world’s major drug triangles and transshipment routes, including the Golden Crescent and the Andean region of South America.

The illegal drug industry is now a worldwide enterprise with tens of millions of hard core consumers spending a fortune on opiates, cocaine and amphetamines and marijuana, as well as other drugs.Two groups - hard core users and casual users, spend enormous amounts of money to fuel their drug habit.

All these drug sales mean that large amounts of cash accumulate in stash houses and collection points around the country. Despite an extensive counter surveillance system by different enforcement agencies in India, drugs are freely available in every town and city. Drug markets have cropped up everywhere, even at the pharmacy shops. High alcohol and drug dependence among the youth is a trend as well as an addiction. Substance culture in today’s world is affecting the vulnerable youth in schools and colleges. The drug most popular among Bengaluru youth is LSD (Lysergic acid diethylamide also known as acid), followed by hashish, ecstasy pills, ganja, heroin, cocaine and MDMA.According to the Home Minister of Karnataka the number of cases registered division-wise and number of persons arrested in the last three months (from Nov. 2016 to January 2017), more cases were registered in Mangaluru city in comparison to Bengaluru.Bengaluru police nabbed 81 drug peddlers in the first 90 days of 2017. In Bangalore city alone, police have arrested 234 people in connection with smuggling and peddling of banned narcotic materials. Neighboring Kerala is another haven for drugs of all kinds. . Teenagers can access drugs anywhere in the State from petty shops near schools, to bakeries, and even barber shops. Ganja is mainly brought in either by migrant workers or by those disguised as migrant workers. The popularity of ‘Idukki Gold’, a green variety of weed grown in Idukki district is very much sought after, something like Malana hash, one of the most sought after cannabis variant in northern India. Locally known as 'Neela Chadayan' or simply Chadayan, which means ‘blue curly’, it is supposed to be a hybrid strain of cannabis 80 per cent Indian and 20 per cent foreign. It is internationally renowned as one of the finest drug varieties in the world.

The college drug trade is the most lucrative segment for all peddlers. The temptation of the drug economy to head straight to the colleges and schools for locating easy prey as also invitation to join the underground drug economy is a very tough nut to crack. Both options represent high risk pathways for students. Peddlers are constantly devising ways of making it easier for students to access drugs. Once the peddlers become known among drug-abusing students, they identify students who can serve as delivery boys to help them meet the growing demand. The drug trade thus easily expands both inside and outside the campus.

From source to street to school and college campuses, it is an incredible journey of temptation at every stage and for every hand it touches.

Title: Temptation at every stage - Narcotics from source to street