Study drugs - How studious can they make you?

Come examination season and students go on an intensive overdrive, cramming and mugging as much study material as possible, within the shortest time possible. Aiding their efforts are a class of drugs referred to as "Study Drugs", "Smart Drugs", "Nootropics", "Neuro enhancers". It is medically acknowledged that these drugs improve decision making and problem solving.

For centuries Indians have consumed the Brahmi leaves to enhance the cognitive functions of the brain. Its botanical name is Bacopa Monnieri, and in addition to improving memory, it is used to treat Alzheimer’s disease.

Students use study drugs to get a short term energy boost. Today’s students are under enormous stress and the pressure to succeed is intense. Exorbitant fees, burden of bank loans, spiraling living costs, uncertain job markets, all mount great stress on the young minds. To achieve academic excellence, many rely on study drugs to enhance mental focus. Study drugs also known as "Smart Drugs" are used to treat Attention Deficit Disorder (ADD) , and Attention Deficit Hyperactivity Disorder (ADHD). These drugs are highly addictive and have effects similar to street drugs. Though they improve concentration, memory and focus, they cause sleeplessness, nervousness, loss of appetite, changes in sex drive, and feelings of depression. Long term users are likely to develop physical and psychological dependence on these drugs. Modalert 200 mg is a generic name for Modafinil, a study drug widely sold across India. It is a memory improving and mood brightening psycho stimulant. It acts on brain chemicals that control the sleep/wake cycle and enhances wakefulness, attention capacity and vigilance. 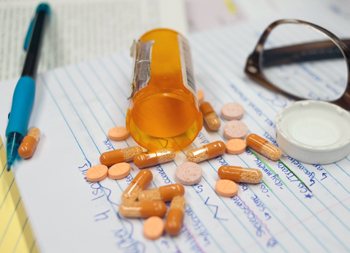 Drugs like Adderall and Ritalin are consumed to enhance mental focus so as to help in studying. Adderall is a psycho stimulant composed of mixed Amphetamine salts. It increases alertness, concentration and overall cognitive performance while decreasing user fatigue. It is available in two formulations: immediate release and extended release. Adderall is not available in India. Amphetamine salts or their stereoisomer (eg: dextroamphetamine) are banned. Indian version of Ritalin is Addwize, but it is a Schedule X drug. The usage of study drugs has boomed among the academic elite. Trying to induce academic prowess using chemicals and medications, which are considered as the first line of defense for problems psychological or otherwise, is causing great harm to the students. These drugs can tempt students to even commit crimes.

The wide variety of smart drugs is based on Vitamin B and its derivatives. Some students use B complex plus Lysine syrup. What starts as a supplement to boost concentration and memory, becomes an addiction. Students get addicted to study drugs and carry this habit into their new workplaces. Over a period of time people on study drugs come to depend on the chemical signals that these drugs send to the brain to stay alert. When they discontinue these drugs they suffer withdrawal symptoms.

In sports the use of drugs is referred to as doping and can lead to disqualification of the sports person. In sports the rule is crystal clear, doping means cheating. However, use of study drugs does not attract such disqualification. Maybe this could be for the reason that in academics there can be multiple winners, many can obtain a first division, distinction or ‘A’ grades. Parents are also likely to condone their wards taking study drugs in the belief that it is for their better future. Many researchers are of the opinion that use of study drugs tantamount to cheating. Use of study drugs is the first step leading to chronic addiction and later graduating to hard core drugs The Gateway drug theory is a comprehensive catchphrase for the medical theory that the use of a drug can lead to further use of stronger drugs with more frequency. It is also called the Stepping stone theory. Parents and students need to be aware of the dangers of using study drugs. It is a risky way to try and get an edge.

Title: Study drugs - How studious can they make you?