Battle for Bengaluru: As BJP, Cong fight it out, AAP exudes confidence

Bengaluru, Aug 7 (IANS): The political parties in Karnataka have drawn their swords for the battle of Bengaluru. After the intervention of the Supreme Court, decks have been cleared for conducting elections for the 243 wards of the Bruhat Bengaluru Mahanagara Palike (BBMP), the elections of which have been pending since September, 2019.

The BJP and the Congress want to establish their supremacy to show that they are running the show in the Silicon Valley of India. Both are indulging in bitter fights over the reservation of wards, and the Congress has gone to the Supreme Court. The verdict is expected soon. 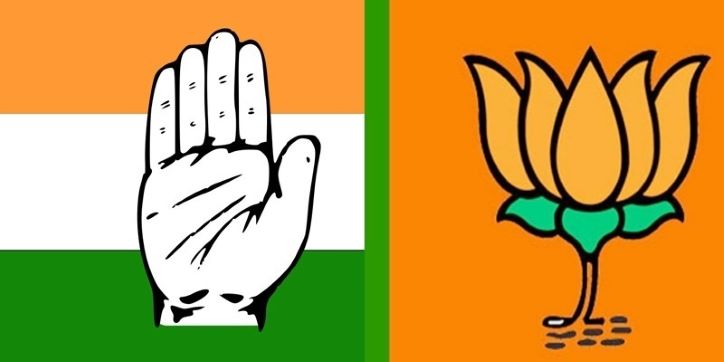 Meanwhile, the Aam Aadmi Party (AAP) is brimming with confidence that it would fly its flag in Bengaluru by springing a surprise in the civic polls of Bengaluru, no matter whenever the elections are held. The ruling BJP has been accused of bungling with reservation and the delimitation process. The Opposition blames the ruling party for deliberately wanting a prolonged legal battle so that the BBMP elections are held after the state General Assembly elections in 2023.

Anil Kumar Tadkal, spokesperson of the Congress while talking to IANS said that the BJP has violated all rules while finalising the delimitation of wards. "There has to be certain guidelines such as the number of voters or any other criterion. Where there is no presence of ST community, the ward is reserved for them similarly where there are more number of SC voters, the ward is made general category. Wherever Congress MLA's are there, in 96 wards, 72 wards are reserved for women," he says.

"We are ready to face elections any day. But, the BJP is wanting to postpone the BBMP elections somehow as the notification for the state Assembly elections will be made in six months. If elections are held now, sitting MLAs will have to take care of the expenses. They may face rebellion, which would affect them adversely," Anil Kumar Tadkal explained.

"The Congress candidates have been working in the respective wards for the past 3 to 4 years, after getting all details, BJP has deliberately messed with reservation for its advantage. The wards represented by BJP candidates have remained untouched," he said.

He further said that the anti-incumbency factor is clearly visible in Bengaluru. The ruling party has destroyed the status of Bengaluru as IT, BT and garden city. First, the BJP made Bengaluru a garbage city and people know how they had put public buildings for sale. "We will focus and we will not have any problem facing elections at any given point," he said.

Chief Minister Basavaraj Bommai defended the list by stating that the reservation matrix has been prepared in accordance with the 2015 High Court order. "The Congress had also done it when they were in power. They should introspect on what they have done. We all know what has happened in each constituency.

"Congress has the option of challenging the BBMP reservation matrix in the court. Instead the party is indulged in rowdyism. How appropriate is this? This shows the Congress culture. Everyone will condemn it," CM Bommai had stated.

Jagadish V. Sadam, the State Media Convener for AAP in Karnataka stated that Bengaluru people are suffering because of the corruption of ruling BJP. The incessant rainfall since the past three months has totally exposed the national parties. Though, ruling BJP is claiming that the low-lying areas and encroachment areas are inundated, the fact is the rainwater has entered houses in most of the localities. They are directly suffering from the corruption practices, and voters in Bengaluru are well aware of Punjab and New Delhi models, he said.

The people have decided to vote for the AAP and the victory of the party is ensured. From the selection of candidates by AAP itself, people will see differences. The not so famous people and friendly individuals from various walks of life are chosen. AAP is giving an opportunity to 122 women candidates to contest. "Our women candidates are independent and people can make out differences between the candidates of national parties who are nothing but rubber stamps. Our women candidates would be educated, independent. The people would feel proud to elect them," Jagadish V. Sadam said.

Dr Raghavendra S.R., social activist, civic leader and a member of B-PAC (Bengaluru Political Action Committee), told IANS that due to the dispute on reservation, if the court takes time, there are chances of continuation of the rule of administrator in BBMP. There are questions about the delimitation of wards.

"The voters will have to observe the civic amenities, they should also know how much money has been released for their wards. The details are given in the website. Wherever there is no utilization of funds and misuse of funds are found, the voters should elect new faces," he explained.

Title: Battle for Bengaluru: As BJP, Cong fight it out, AAP exudes confidence