Nagpur, May 29 (IANS): The political couple -- Navneet Rana, an MP and her MLA husband Ravi Rana, sparked yet another controversy, this time in Nagpur.

Following their conflict with the Shiv Sena workers over chanting of Hanuman Chalisa at the residence of Chief Minister Uddhav Thackeray, the couple – Navneet Rana and Ravi Rana - faced a similar situation in Nagpur from the NCP workers. 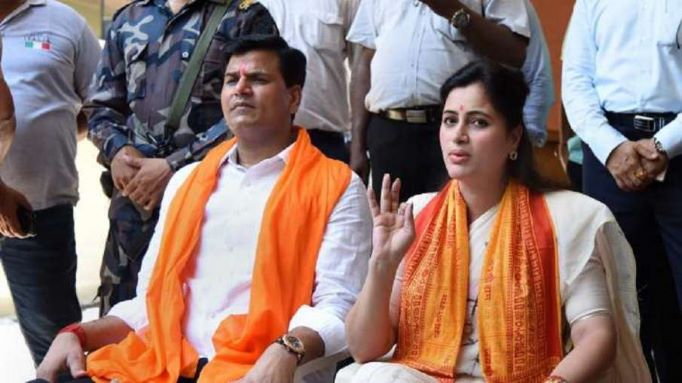 Banners of Ranas reciting Hanuman Chalisa at the Ramnagar Hanuman temple were put up right in front of the NCP office in Nagpur. The NCP activists, led by state vice-president Prashant Pawar, set up a stage near the temple for chanting of 'Sundarkand' to counter Ranas.

A heavy police bandobast was deployed at the temple premises and only after dispersal of the NCP workers after they did Aarati and chanted 'Sundarkand', the Rana couple was allowed to visit the temple after 2.10 p.m. A tensed atmosphere was palpable but no untoward incident took place during the "pujas" by both the sides.

The couple's decision to chant Hanuman Chalisa in different parts of Maharashtra had earlier evoked sharp reactions across political parties. Navneet Rana and Ravi Rana were arrested by the Mumbai Police on April 23 after the couple announced they would recite the Hanuman Chalisa outside Chief Minister Uddhav Thackeray's private residence 'Matoshree' in Mumbai. The announcement was followed by a prolonged high-voltage political drama which saw protests by Shiv Sainiks outside the couple's residence.

The Rana couple was returning to their constituency for the first time after being released from jail. They were given a rousing welcome at the airport by their supporters when they landed here on Saturday.