Eshwarappa turns chink in BJP's armour for Oppn in K'taka

Bengaluru, Apr 13 (IANS): Just when it looked like the BJP is unstoppable in Karnataka, the party appears to have hit a snag in the form of K.S. Eshwarappa, the Minister for Rural Development and Panchayat Raj.

Accused of abetting the suicide of civil contractor Santosh Patil, Eswarappa has overnight become a chink in the ruling BJP's armour. 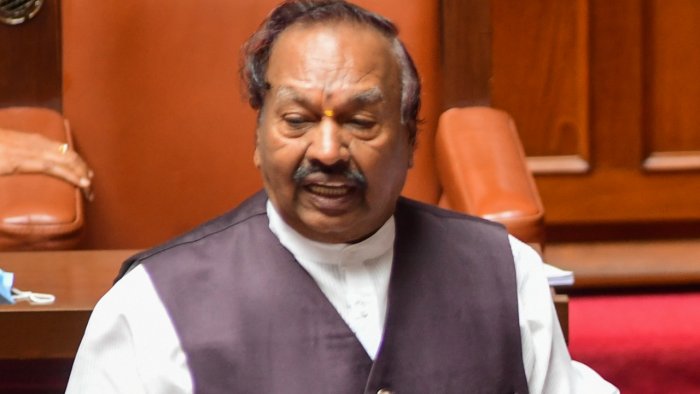 For the past several months, the state had been witnessing an increasingly aggressive stance by pro-Hindu outfits, along with statements by some BJP leaders as well.

Chief Minister Basavaraj Bommai also allegedly turned a blind eye to these developments, while the Opposition Congress preferred discretion over valour in a volatile situation, maintaining a low profile.

The death of Santosh Patil under suspicious circumstances has given ammunition for the Opposition parties to aggressively target the only BJP government in south India.

The deceased had earlier accused Eshwarappa of demanding a 40 per cent cut for clearing work bills. He had even knocked the doors of the party high command, but apparently to no avail. His death by suicide and a video statement laying the blame squarely on Eshwarappa have put the BJP in an uncomfortable spot in the state.

The issue has been picked up by the Opposition parties, especially the Congress which had been groping around for a cause that would give them traction in the state.

The Congress has become very vocal over the issue, with Opposition leader Siddaramaiah saying, "Never in its history has Karnataka seen such a corrupt government."

Karnataka Congress President D.K. Shivakumar said, "We will not stop here. If at all there is an order prohibiting agitations in Bengaluru, we will continue to protest on the issue even if we are punished."

This is not the first time that corruption charges have been tossed at the BJP leaders in Karnataka. However, in Eshwarappa's case, the death by suicide of their own party man has queered the pitch for the party, especially with the Congress targeting the Prime Minister on the issue of corruption.

Apart from heading the state unit of the party, Eshwarappa has donned the caps of Deputy Chief Minister, besides heading several ministries over the years.

But it was only recently that Eshwarappa made it to the national headlines with his controversial statement about hoisting the saffron flag over the ramparts of the Red Fort very soon in the future.

Predictably, the statement made during the height of the hijab controversy had roused all-round indignation. But the old BJP hand stood his ground until the party brass advised him to apologise.

Seemingly undaunted, the minister has continued with his aggressive endorsement of Hindutva on several occasions. All seemed to be going well for Eshwarappa, till he got engulfed in the Santosh Patil controversy.

Eshwarappa is a chip of the old block. In his 70s, Eshwarappa has his roots in the RSS and ABVP, and has been a leading member of the BJP over the decades.

He made up the Yediyurappa-Anant Kumar-Eshwarappa troika that built the party from ground-zero in Karnataka. From a negligible presence in the 80s, through the 90s, and into the 2000s when the party went on to form governments, Eshwarappa was in the thick of things.

Hailing from the Kuruba community, Eshwarappa is a senior backward class leader who has proved to be extremely useful for the party in Karnataka.

Eshwarappa was the only person to take on Opposition leader Siddaramaiah on the floor of the Assembly and in public space, defending Hindutva. If Eshwarappa is sidelined, Siddaramaiah will become the face of Kuruba community and other backward class.

Ramesh Jarakiholi, another prominent backward class leader from the BJP, has been already sidelined in connection with the alleged sex-CD scandal.

It is certainly a major blow to the BJP, which appears to be on the backfoot for the first time in several months.

With Assembly elections barely a year away, the Eshwarappa episode couldn't have come at a more opportune juncture for the Opposition parties in Karnataka.

Will Chief Minister Bommai and the BJP top brass stand by Eshwarappa in his hour of crisis or will he be sacrificed at the altar is a question on everyone's mind.

While Eshwarappa may yet survive this scandal, the episode will continue to haunt the BJP over the years, feel political observers.