Thiruvananthapuram, Jan 18 (IANS): With reports of Covid-19 clusters being formed at the Kerala state secretariat, the state run road transport corporations, the police stations, the state is turning into a hotspot and though Chief Minister Pinarayi Vijayan is under treatment in the US, he will take part in an online meeting on Thursday. On the cards are fresh restrictions in the state.

State Health Minister Veena George said while the daily cases in the state on December 26 were just 1,824, on Monday it crossed 22,000, witnessing a huge spike.

On Monday, the total number of active cases jumped to 1,21,458 and so was the daily test positivity rate which reached a recent record high of 33 per cent. 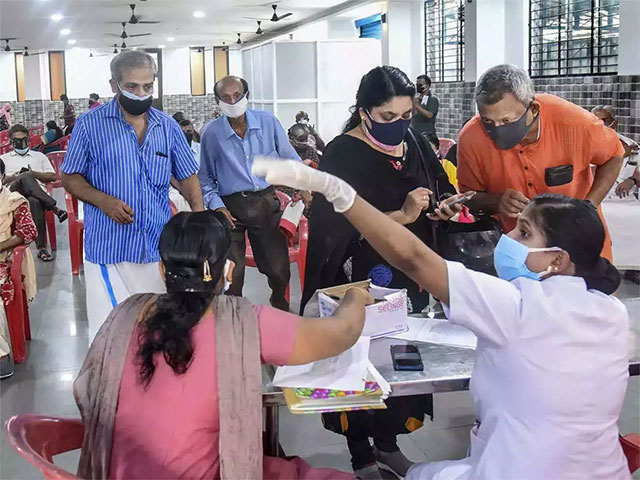 And on Tuesday the news is that the office of Vijayan is partly closed and quite a few of the staff including his political secretary has turned Covid positive. Besides on Tuesday, state Education Minister V. Sivankutty also turned positive and is now admitted to a private hospital. Sivankutty took active part in the Thiruvananthapuram district CPI-M party conference which ended a few days back.

The offices of many Ministers in the State Secretariat have reported positive cases and the latest news on Tuesday is there were 72 positive cases, forcing the employees writing to Vijayan to see that something is done.

The police department also has begun reporting numerous positive cases. A police station in the state capital city, on Tuesday reported a huge number of cases and reports coming in from the temple town at Sabarimala that with the peak season just finishing, several police officials who were on duty have turned Covid-19 positive.

"As such the Corporation is excess staffed and even if some staff turn positive, there is nothing going to happen. A misinformation campaign is going on in the social media and the truth is, yes there are staff who have turned positive, which is natural, but at the moment things are well under control," said Raju.

Another feature this time as Covid is spreading, many medical professionals in the state despite taking both the doses have turned positive. On Tuesday, 10 doctors at the state run General Hospital in the heart of the capital city also turned positive.

Leader of Opposition V.D. Satheesan said the Kerala health department is sitting idle even as Covid is raging in the state.

"The present figures that come out are just only a small percentage of the real situation. Only one fourth of the daily positive cases are being reported. It's strange that the decision was taken last week that schools will be closed only from January 21. We are passing through the worst Covid times and the health department is idling as no precautionary measures are taken to handle the present raging spread," said Satheesan and added that the need of the hour is to have sensible handling of things and a total lockdown is not the answer.

The ruling CPI-M has come under fire in the way they have been holding their district party meetings which is the curtain raiser to their state party conference to be held at Ernakulum next month which will end up at Kannur with the Party Congress in April.

And when asked CPI-M state secretary Kodiyeri Balakrishnan, if they are planning to postpone their party meetings, pat came the reply, "we have just inaugurated the office of the party Congress. Why can't you think positively and asking of postponing," said Balakrishnan.

"It seems there are two sets of rules in Covid, one for the people and the other one for the CPI-M. Just see how many people have turned positive after attending the Thiruvananthapuram district CPI-M meetings. For weddings and funerals, only 50 are allowed and see the dance, musical performance and the numbers at their party meetings. They have become the 'merchants of death' by spreading Covid," added Satheesan.