Mumbai, Jul 10 (IANS): There were red faces in Mumbai Congress after a bullock-cart protest abruptly ended when the overloaded cart broke down during a rally to protest against rising petrol-diesel prices, here on Saturday.

The incident happened at the Antop Hill area when the protesters led by Mumbai Congress President Bhai Jagtap and other leaders were raising full-throated slogans slamming the BJP government at the Centre over the runaway fuel prices. 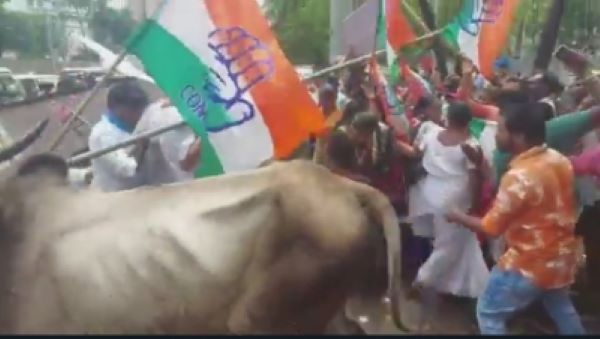 According to eyewitnesses, around a dozen-odd heavyweight party leaders were standing on the bullock cart which suddenly gave away and collapsed, creating huge confusion amid the loud sloganeering.

The Congress activists could be seen trying to help their leaders who practically fell into a heap as the cart could not bear their collective weight and gave away without warning.

Fortunately, there were no reports of injuries to any of the leaders or activists, and even the bullocks remained under control. However, the protest was quickly terminated after the mini-debacle.

Saturday's protest was part of the 10-day-long sustained agitation which started on July 7, with signature campaigns at fuel stations, rallies in cities and towns, and bicycle or bullock-cart processions being taken out all over Maharashtra.

The petrol prices in Mumbai have crossed Rs 106/litre whereas diesel has zoomed past the Rs 97/litre-mark, ranking among the highest in the country, with a cascading effect on various sectors of the economy, leading to an outcry from different sections of the society.