New Delhi, Feb 1: Finance minister (FM) Nirmala Sitharaman presented the Union Budget 2021-22 in Parliament on Monday February 1. In a significant departure from the tradition, this year’s Budget was not printed and was only made available in a digital format. This was Sitharaman’s third budget under the National Democratic Alliance (NDA) government led by Prime Minister Narendra Modi.

In significant changes to the taxation process, Sitharaman announced the scrapping of income tax for senior citizens under certain conditions, new rules for removal of double taxation for NRIs, and a reduction in the time period of tax assessments among other measures. Start-ups will get an extension in their tax holiday for an additional year. Sitharaman also announced that the advance tax liability on dividend income shall arise after declaration of payment of dividend. 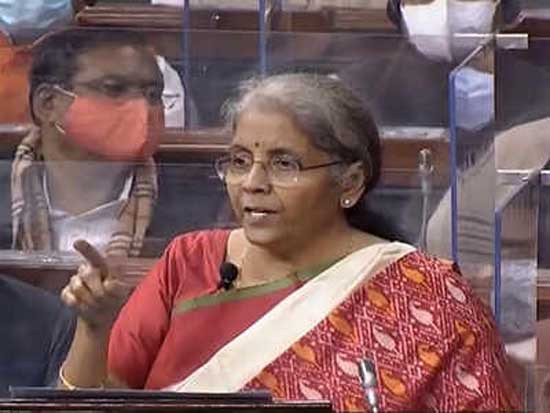 In 2020-21, a significant cut in the tax rates for the salaried class was announced, which, Sitharaman said, was to simplify the tax regime which was riddled with multiple exemptions and needed taxpayers to take the help of the professionals. Last year’s announcement ushered in a new tax regime where the taxpayer got the option of taking new rates without exemptions or sticking to old rates with exemptions.

In her speech, Sitharaman announced that India’s fiscal deficit is set to jump to 9.5 per cent of Gross Domestic Product in 2020-21 as per Revised Estimates. This is sharply higher than 3.5 per cent of GDP that was projected in the Budget Estimates. A slump in government revenues amid the Covid-19 pandemic has led to a sharp rise in deficit and market borrowing. In health care spending, Sitharaman announced a total spend of around Rs 2 lac crore on healthcare with Rs 35,000 crore on Covid-19 vaccine development and inoculation.

Sitharaman, in her speech, announced a push to the textile industry, a hike in custom duty on cotton and raw silk, a new cess on agriculture development – Rs 2.5 per litre on petrol and Rs 4 per litre on diesel – a central university in Leh, a focus on sea-weed farming with a new facility in Tamil Nadu and a new vehicle scrapping policy that aims to provide the auto sector a boost among other announcements. Sitharaman also announced that an additional 1 crore families will now benefit under the Centre’s Ujjwala scheme.

Speaking on the farmers’ issue, FM Nirmala Sitharaman said that the Modi Govt is committed to the welfare of farmers. The MSP regime has undergone a change to assure price that is at least 1.5 times the cost of production across all commodities, she said. Rs 75,060 crore is paid to farmers for wheat procurement in 2020-21, she added.

The FM also announced measures under Aatmanirbhar package. She said the early PM Garib Kalyan Yojana amounted to almost presenting 5 “mini budgets” in 2020. She proposed strengthening of ‘Sankalp of Aatmanirbhar Bharat’. Focus on 6 pillars, which include – Health & Well-being, Inclusive Development, Human Capital, Innovation and R&D. FM added that the govt is fully prepared to support and facilitate economic growth and they are introducing Aatmanirbhar Swastha Bharat Yojana with an outlay of Rs 64,180 crore. FM said that, today India has two vaccines available and has begun safeguarding not only her own citizens against COVID-19 but also those of 100 or more countries. It has added comfort to know that two more vaccines are also expected soon.

The FM announced that Jal Jeevan Mission Urban will be launched with and outlay of Rs 2.87 lac crore over 5 years which is aimed at universal water supply in all 4,378 urban local bodies, with 2.86 crore household tap connections and liquid waste management in 500 AMRUT cities. She also announced Urban Swachh Bharat Mission 2.0 with outlay of Rs 1,41,678 crore over 5 years from 2021 focused on complete faecal sludge management, waste water treatment, source segregation, management of waste from urban construction, bioremediation of legacy dump sites. Announcing major infrastructure boost, FM announced highway works in various states including 3,500 km corridor in Tamil Nadu, 1,100 km in Kerala at investment of Rs 65,000 crore, 675 km in West Bengal at a cost of Rs 95,000 crore and 1,300 km in Assam in the next 3 years. In May 2020, Govt announced the Atmanirbhar Bharat package, to sustain the recovery further we also rolled out two more Atmanirbhar packages. Total financial impact of all packages including measures taken by RBI was estimated to be about Rs 27.1 lac crore, Sitharaman added.

The FM announced that Indian Railways will have a National Rail Plan for up to 2030. For aviation sector, FM said that the next lot of airports will be privatized in tier 2 and 3 towns and cities. FM said that in FY22 outlay (budget estimate) for health & well-being is up 138%, and is at Rs 2,23,846 crore. Govt has also allocated Rs 35,400 crore towards COVID vaccines for FY22 and is committed to more if required. She said Modi govt is committed to achieving targets laid out under the national infrastructure pipeline. Ujjwala scheme will be expanded to over 1 crore more beneficiaries. We will add 100 more districts in the next three years to the city gas distribution network. A gas pipeline project will be taken up in Jammu and Kashmir, FM said.

12:55 pm - Tax holiday for startups extended by another year. In order to incentivise funding for startups, capital gains exemption to continue for one more year: FM

12:48 pm - To further reduce litigation for small taxpayers FM announced setting up of a dispute resolution committee which will be faceless to ensure efficiency, transparency. Anyone with a taxable income up to Rs 50 lac and disputed income up to Rs 10 lac eligible to approach committee: FM

12:41 pm - The government proposed to review 400 old customs duty exemptions this year through extensive consultation. The revised customs duty extensions will in effect from October: FM

12:38 pm - Tax exemption announced for affordable housing for migrant workers. The deduction on payment of interests of affordable housing has been extended by 1 year. Serious tax offences of concealment of income of over Rs 50 lac can be reopened after 10 years. The government cuts the timeline for reopening of tax cases to three years from six years: FM

12:36 pm - States to get 41 per cent share of taxes as per the 15th Finance Commission recommendation. The government has accepted the recommendation: FM

12:33 pm - FM also proposed a national language translation initiative; a deep ocean mission with outlay of more than Rs 4,000 crore over five years. She also stated that the government will borrow Rs 80,000 crore in the remaining two months to meet FY21 expenditure. Further, the FM announced that the upcoming Census for the first time will be a digital Census for which Rs 3,726 crore will be allocated.

12:31 pm - Senior citizens above 75 years do not need to file IT returns. This is in case they have only interest in income and pension: FM

12:28 pm - Social security benefits will be extended to gig and platform workers. Minimum wages will apply to all categories of workers. Women will be allowed to work in all categories and also in night shifts with adequate protection: FM

12:16 pm - The Centre has proposed to set up a Central University in Leh: FM

12:13 pm - Ujjwala scheme to be expanded to over 1 crore more beneficiaries. Additional 100 districts in the next three years will be added to the city gas distribution network. A gas pipeline project will be taken up in Jammu and Kashmir as well, said finance minister Nirmala Sitharaman.

12:11 pm - Boost to startups: "For startups, we are allowing 1% companies to grow without any restriction on their paid-up capital," FM Sitharaman said.

12:08 pm - Finance Minister Nirmala Sitharaman says, "For startups, we are allowing 1% companies to grow without any restriction on their paid-up capital."

12:05 pm - Amid ongoing farmers protest, the agriculture credit target is set at Rs 16.5 lac crore for FY22. The agriculture infrastructure fund has been increased by Rs 40,000 core: FM

11:58 am - Separate administrative structures for cooperatives to be set up. FM Sitharaman also proposed capitalisation of state-owned banks, earmarking Rs 20,000 crore for the same.

11: 55 am - FM Sitharaman says disinvestment of BPCL, Air India, Shipping Corp, BEML, Pawan Hans, Nilanchal Ispat to be completed in FY22. She adds other than IDBI Bank, two more public sector banks to be taken up in FY22. The IPO of LIC will also be completed in this fiscal.

11:42 am - Railways to monetise dedicated freight corridors, says FM Sitharaman while talking about the monetisation of assets.

11:36 am - Major allocations in Budget 2021 for infrastructure: Rs 5,000 crore to be transferred to NHAI InViT. National Highway Authority of India, PGCIL to sponsor one InviT each; Rs 1.18 lac crore allocated for Road and Highway ministry; National Rail Plan for 2030 is to create a future-ready railway system by 2030; Dedicated freight corridors for western and eastern India to be commissioned by 2022: FM

11:30 am - "The government announces scrapping policy, which will be voluntary, to encourage environment-friendly vehicles and reduce pollution and oil import bill. Vehicles will undergo a fitness test after 20 years for personal vehicles and 15 years for commercial vehicles. The government has allocated Rs 1.97 lac crore for PLI schemes over 5 years," FM said.

11:28 am - Government to set aside a sum of Rs 35,000 crore for the development and distribution of COVID-19 vaccines. The centre to dissipate more funds should the need arise: FM 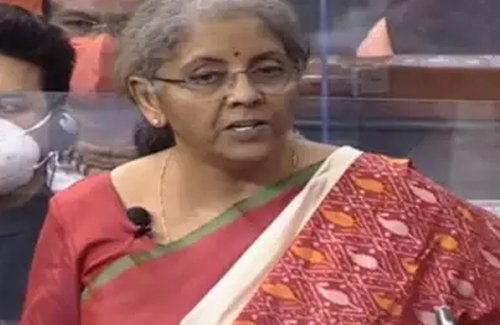 Union finance minister Nirmala Sitharaman began presenting the Union Budget 2021-2022 at 11 am February 1. "We could not have imagined the global slowdown during the last Budget. We announced the 'Aatmanirbhar' Package in May 2020 to sustain recovery. Total COVID-19 support measures amount to 13 per cent of GDP and total COVID-19 support measures by government and RBI amounts to Rs 27.1 lac crore." she said.

Nirmala Sitharaman said that the Budget was prepared in unprecedented circumstances. She also said that this year brought unforeseen hardships for the people of India, which had all government servants, and particularly frontline workers continue with their duties like before but with added anxiety and health risks.

"India has two COVID-19 vaccines available and we expect two more vaccines soon. India currently also has one of the lowest death rate and active cases in the world. India's economic contraction is due to a global pandemic. The government is fully prepared to support and facilitate economic reset," the FM said.

New Delhi, Feb 1: Finance Minister Nirmala Sitharaman is set to present the Union Budget 2021-2022 for the third time on February 1. This budget comes in the wake of the novel coronavirus crisis, whose spread has left national economies and businesses counting the costs, as governments struggle to contain it.

Sitharaman was spotted with a 'Made in India' tablet in a red cover with an emblem as the Centre has gone paperless this year amid Covid-19. Sitharaman is expected to deliver a budget that is expected to provide relief to the pandemic-hit common man as well as focus more on driving the economic recovery through higher spending on healthcare, infrastructure and defence amid rising tensions with neighbours. 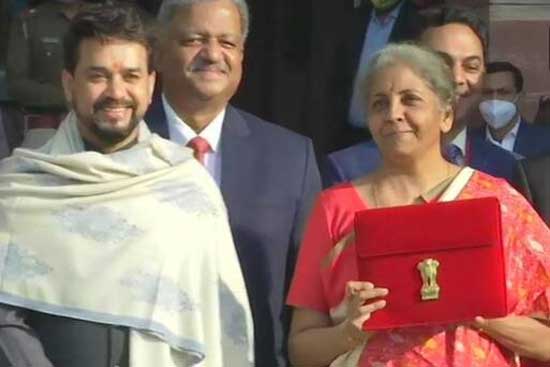 The ninth budget of the Narendra Modi government, including an interim one, is also expected to focus on boosting spending on job creation, putting more money in the hands of the average taxpayer and easing rules to attract foreign investments.