New Delhi, Nov 10: The Bharatiya Janata Party has had a rather an eventful time in the elections which took place across the country on Tuesday, November 10. The NDA has returned to power in Bihar, though by the slimmest of margins, as results on the Election Commission site indicated that it crossed the majority mark of 122 seats in the 243-member house as the NDA comprising the Bharatiya Janata Party (BJP), Janata Dal United, Vikassheel Insaan Party (VIP) and Hindustani Awam Morcha (HAM) winning 125 seats in all.

The performance of the party in Karnataka, Uttar Pradesh has been tremendous given it took place at a time when the party had to prove themselves amid the prevailing situation brought on by the pandemic. The results for the 243 assembly seats in Bihar, showcased the Mahagathbandhan giving a tough fight to the National Democratic Alliance. However, the BJP managed to sail through the bypoll elections in other states. 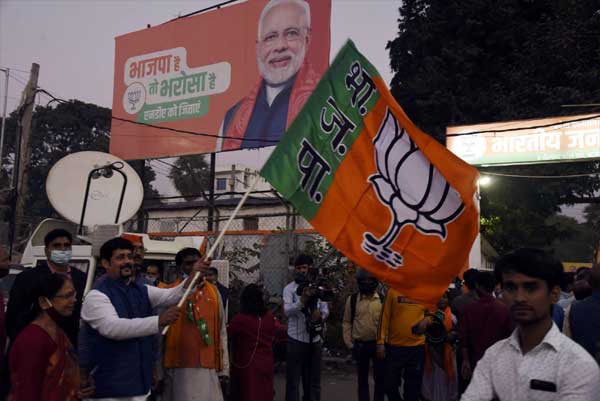 In Madhya Pradesh polls for the 28 constituencies the BJP has won 19 seats. Meanwhile, the Congress has won nine seats.

Bihar Assembly election results on Tuesday, November 10 changed the predictions made earlier during the exit polls, which claimed downright victory for the Grand Alliance (Mahagathbandhan).

The results of the Bihar Assembly elections and bypolls held for 28 seats in Madhya Pradesh are all set to be declared on Tuesday November10.

The voting for the 243-member Bihar Assembly started on October 28 in three phases. The majority mark is 122.

The results will be declared on November 10.

The RJD-led Mahagathbandhan is headed for a clean win at the Bihar Assembly elections 2020, said at least two exit polls. It could also be a tight race between the NDA and the Opposition alliance with the latter having an edge in Bihar. Some exit polls are also indicating a hung house. While none of the polls give LJP significant numbers, in case of a hung Assembly, Chirag Paswan could become crucial for either alliance to come to power.

Meanwhile, bye-elections were held on 28 seats in Madhya Pradesh on November 3. The results will be declared on November 10.

The Bharatiya Janata Party (BJP) is projected to win 16 to 18 seats, while the Congress party will have to settle with just 11 seats in the Madhya Pradesh by-elections, according to the exit polls.