Mumbai, Nov 14 (IANS): Seven persons, including two females, were arrested at the Chhatrapati Shivaji Maharaj International Airport, Mumbai by the Customs officials after 61 kg gold worth around over Rs 32 crore was recovered from them.

A senior customs official said that the passengers were held on Friday in two different cases.

The official said that this was the highest seizure in a single day in the reported history of Mumbai Airport Customs. 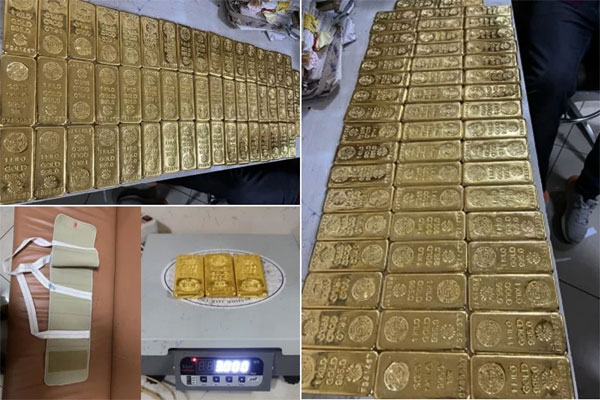 In the first case, four passengers of Indian nationality, who landed from Tanzania, were found in the possession of smuggled gold in the form of 1 kg bars ingeniously concealed in specially designed waist belts with multiple pockets.

"Total 53 kg (12, 13, 14 & 14) gold valued at Rs 28.17 crore was recovered from the four passengers. The specially designed belts with UAE made gold bars concealed inside were handed over to the passengers by a person of Sudanese nationality at Doha airport during the transit time," said the Customs official.

At Mumbai Airport, based on the continuous monitoring of suspicious flights and building on the data-based analysis from the earlier high-quantum gold and foreign currency seizures, a systematic profiling of suspect passengers was undertaken on sensitive flights from certain places in Africa and the Middle East.

"In the recent case of Foreign Currency seizure of 4.08 crore, the pattern and mode of operation noticed along with profiling of foreign national passengers and extrapolating the patterns led to success in this case," the official claimed.

The Customs department said that during the operation, four Indian passengers arriving from Doha in Qatar Airways Flight were intercepted. On inquiry, they were found to be coming from Tanzania. During a personal search of the said passengers, 53 kg gold (12, 13, 14 and 14) was recovered in total. The gold bars were concealed on their body in a specially designed belt, having multiple pockets, wrapped around their torso.

"During the interrogation, all four passengers confessed that they were handed over the gold in transit at the Doha airport by an unknown Sudanese national who had not travelled with them on the flight. All the four passengers have been arrested and remanded to 14 days judicial custody by the Additional Chief Metropolitan Magistrate," the official said.

Meanwhile in another case, based on intelligence, the officials of Mumbai airport seized 8 kg gold worth Rs 3.88 crore from three passengers. They arrived from Dubai via Vistara Flight.

"Gold dust in wax form was found ingeniously concealed in the waistline of the jeans pants worn by the passengers. Of the three passengers, one woman passenger in her late sixties was in a wheelchair. All three passengers have been arrested and remanded to judicial custody. Further investigation in the matter is going on," the official said.