Karnataka polls: Why coastal districts blew away the political deck of Congress

Mangaluru, May 24: Tagged as a Hindutva lab and a communal hotbed, in 2013 the coastal districts proved the critics wrong by thrusting Congress to power. Back then at the assembly polls, the INC had secured 7 out of eight seats in Dakshina Kannada (DK), three in Udupi and 3 in Uttara Kannada. The Bharatiya Janatha Party (BJP), then in literal sense was uprooted from coastal districts and retained power only in three polling constituencies.

But come 2018 polls, the same districts sprung surprise again. Of the 19 seats the Congress has retained only three constituencies, whereas the rest 16 are bagged by the BJP with overwhelming majority. The shockwave sent by the voters was even felt by veteran Congress leaders like MLA Ramanath Rai who faced defeat by a margin of 15,971 votes. In Udupi, minister for fisheries, youth empowerment and sports Pramod Madhwaraj faced voters' axe by 11,788 and in Uttara Kannada Congress retained power only at Yellapur and Haliyal.

In total over a dozen sitting MLAs faced voters' wrath in the coastal districts, and were sent backpacking home. This despite the district being relatively stable in terms of law and order situation compared to predecessors, which was marred by mob vigilantism, communal incidents, religious discord. 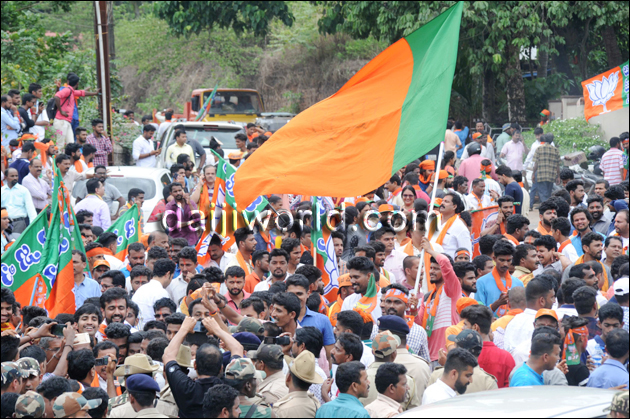 The unexpected voting trend of the constituents has puzzled even the most veteran socio-political observers such as Suresh Bhat Bakrabail. "The result comes as a surprise to me as well. I really cannot put it in words, but probably the anti-incumbency factor had played a role," he says. The 71-year-old does not rule out communal polarisation among other factors. "BJP has made concerted effort to create communal divide in the region. Massive amount of misinformation was spread at outset of murder of Sharath Madivala, Deepak Rao, it was enough to create distrust among religious groups and affect the decision-making ability of the people as voters," he says.

He further adds that despite promising performance by former KAS officer and Congress MLA J R Lobo, and even sitting MLA Ramanath Rai, they were no match to the dynamic and aggressive campaigning style of BJP. "With leaders like PM Modi and Amit Shah, the party gives a larger than life image. Our people being the consumers of Bollywood like it that way, there is a culture of star warship. You cannot act an ordinary soul and claim to lead the people. People expect extraordinary traits from you," he adds in a jest.

In fact, media analyst Srinivas Nandagopal observed that every campaign team had one full time RSS pracharak, who on door to door visit spoke to the household about imminent threat by domination by minority community. "Unlike the Congress volunteers who simply distributed pamphlets and walked-off, BJP campaigners were more well-versed and convincing with their polarisation dialogues," he says. He also added, similar to former CM Siddaramaiah, even local leaders such as legislators Ramanath Rai overdid the minority appeasement, which irked their own voters. 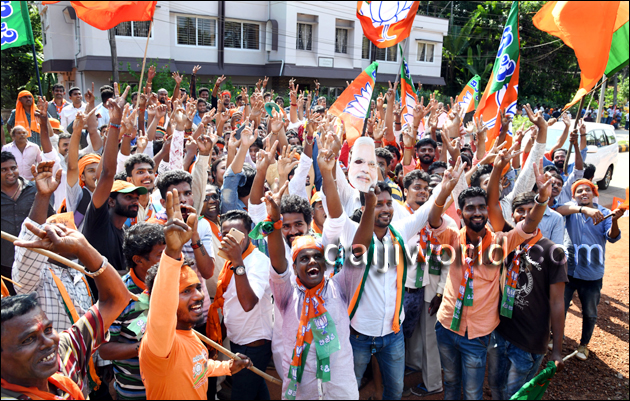 In his congratulatory message, DK MP Nalin Kumar Kateel added how the BJP maintained a silent campaign, yet gained effective result with 'Page-Pramukh'. "For every page of the voters list, BJP had assigned a volunteer, whose job was to ensure that the people in the list voted for BJP," he said.

The BJP along with its allied organisation VHP, RSS has mobilised close to 30,000 volunteers in the coastal districts. Suresh Bhat who collects chronology of communal incidents also corroborates with the fact that in the last few months, there have been barely any communal incidents. "It means, these people were engrossed with the campaign activities," he says.

The embarrassment comes more to the Congress MLAs, since seasoned political veterans of Congress were pitted against political novices of the BJP in key constituencies such as BJP leader Vedavyas Kamath (Mangalore South) against Congress leader J R Lobo, at Mangalore North Dr Bharath Shetty (BJP) against Congress MLA B A Mohiuddin Bava, Rajesh Naik (BJP) against Ramanath Rai (Congress) in Bantwal, Harish Poonja (BJP) against Vasanth Bangera (Congress) at Beltangady. At Puttur, Sanjeev Matandoor debuted as MLA and S Angara continued his victory streak at Sullia for the 6th time.

Similarly in Udupi, there was a saffron-wash, where all the five seats were taken over by the BJP, including that of former state minister for sports Pramod Madhwaraj.

Speaking to StoryInfinity, K Phaniraj, member of Karnataka Komu Souharda Vedike (KKSV) said that the Congress leaders were too self absorbed in themselves. "In the last four years they didn't think of the party or the constituents, it’s only a year since some development was seen. Unlike DK, our district cannot be polarised but it is only the anti-incumbency that played its role," he says. Similarly, voters were upset with Vinay Kumar Sorake (Kaup) over performance issue, he says.

Also, a Congress worker points out an internal rift spoilt party's prospectus in Karkala (Udupi district). Apparently, Former MLA Gopal Bhandary was not even interested to contest this time, in fact Muniyal Udaykumar Shetty was a safe bet for the Congress from Karkala. However Veerappa Moily was interested to place his son Harsha Moily from the seat. "But, when the state high command decided against Moily's preference and suggested Muniyal Udaykumar Shetty, allegedly to avenge humiliation, Moily pulled a few strings in Delhi and saw to it Gopal Bhandary's name was re-listed. Bhandary contested half-heartedly and we came second in the constituency," he says.

In the midst of high public speculation of sitting Congress MLA Pramod Madhwaraj switching sides with BJP, the leader's long maintained silence also cost the party. "Madhwaraj never came out with any clarification, until recently. This affected the morale of the cadre and confused Congress voters, who did not turn up at the polling booth," Phaniraj says.

In Uttara Kannada district, it was completely Modi-Wave that caught the youth's imagination says journalist Ramesh Ankola. "They are young, they don't know the implication of the Hindutva agenda floated by the BJP, so being naive and have voted for them," he says.

The polarisation views floated by the BJP and its allies following the death of Paresh Mesta, also deeply affected the voters decision especially the fishermen community who form major share of BJP vote bank. "Only in Haliyal, Congress sitting MLA RV Deshpande can confidently say it has won with a significant margin, at Yellapur AH Shivaram barely escaped with less than 1500 margin," Ramesh said.

While analysts hail BJP's effective campaign, they also notice that it was 'Brand Modi' than BJP that makes the party relevant. "If you noticed, post election, no one cheered the name of the candidate or the party, it was Modi, Modi all the way," Srinivas Nandagopal says.

While Udupi was a walk in the park for BJP due to anti-incumbency, the pollsters commended BJP's calculated risk of setting up Bunt candidates in Billawa dominated DK, at Uttara Kannada overconfidence and poor grassroot links of Congress leaders contributed to their losses.

Meanwhile, post election, a few Congress legislators in DK have expressed suspicion on the EVMs and said that they would soon file a written complaint with the EC.

Title: Karnataka polls: Why coastal districts blew away the political deck of Congress