New Delhi, Sep 4 (IANS): With the Covid scare still very much around, followed by the fear of Monkeypox, a new viral Hand, Foot and Mouth Disease (HMFD), commonly known as Tomato Flu, is being reported from many states across the country.

After the destructive Covid waves, the country is facing a drastic surge in cases of Tomato Flu, which usually affects children less than 10 years of age. 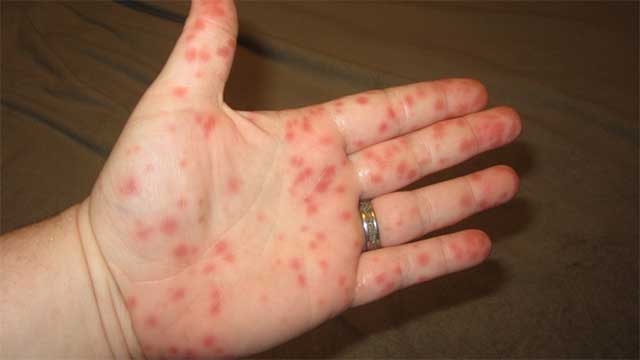 Bhawuk Dhir, dermatologist at RML Hospital in Delhi, said that this is a clear sign of heading towards an era of viral diseases.

"Clearly, we are heading towards an era of viral diseases with the rampage of Covid-19, Monkeypox and now HFMD -- as was predicted by various researchers in the past," Dhir told IANS.

"Tomato Flu is nothing but a variant of HFMD rather than a different disease. It is caused by Coxsackie virus A16 (a non-polio enterovirus), which is highly contagious and spreads through secretions from the nose, throat, fluid from the blisters and fecal-oral route," Dhir added.

He said that in most cases, it is a mild self-limiting viral disease and requires supportive care for recovery. A few may develop complications such as meningitis and disseminated infection.

Last month, the Union Health Ministry had issued guidelines on Tomato Flu, underlining that its treatment is similar to other viral infections like isolation, rest, plenty of fluids and hot water sponge for relief from irritation and rashes. Supportive therapy of paracetamol for fever and body ache and other symptomatic treatments are required.

"Tomato Flu is a self-limiting infectious disease as the signs and symptoms resolve after a few days," the ministry guidelines said.

"It seems the disease is a clinical variant of the so-called HMFD that is common in school going children. Infants and young children are prone to this infection through use of nappies, touching unclean surfaces as well as putting things directly into the mouth. HFMD occurs mainly in children under 10 years of age, but it can occur in adults too. There are no disease-specific medications available," the guidelines said.

Tomato Flu was first detected in the Kerala's Kollam district on May 6, 2022. As yet, no antiviral drugs or vaccines are available for the treatment or prevention of Tomato Flu, the ministry had said.

"The term ‘tomato fever' was used because of the red-coloured blisters which resemble a tomato. A similar outbreak was reported in Kerala in 2007," said Dhir.

Talking about the management of this infection, Dhir said that it is mainly supportive.

"Children with complications may require hospitalisation. No specific antiviral therapy is available for the treatment of this disorder. Currently available antivirals such as acyclovir have not been proven effective in trials," he said.

Asked when to visit the doctor, he said that when the patient is unable to maintain adequate hydration or decreased oral intake, lethargy and irritability.

Although, in rare complications such as neurologic encephalitis, meningitis, paralysis, myocarditis, one should visit the doctor, he advised.

"Children who are unable to drink sufficiently to maintain hydration should be hospitalised for parenteral fluid therapy," Dhir told IANS.