On the morning of the August 4, Ayaan stood against the sign reading āUhuru Peakā in bold, holding the Indian flag after finishing a eight-day hike to Kilimanjaro.

Ayaan Mendon is from Mangaluru who resides in Dubai. He is currently studying at the North London Collegiate School Dubai. Climbing Mount Kilimanjaro has been on his bucket list since he was six. Wanting to be part of a former hike with his parents to Mount Elbrus and being young, he was promised to be taken on for the next hike. 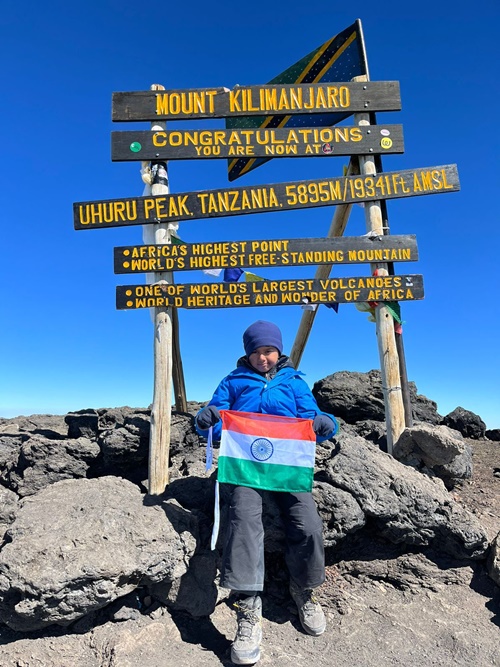 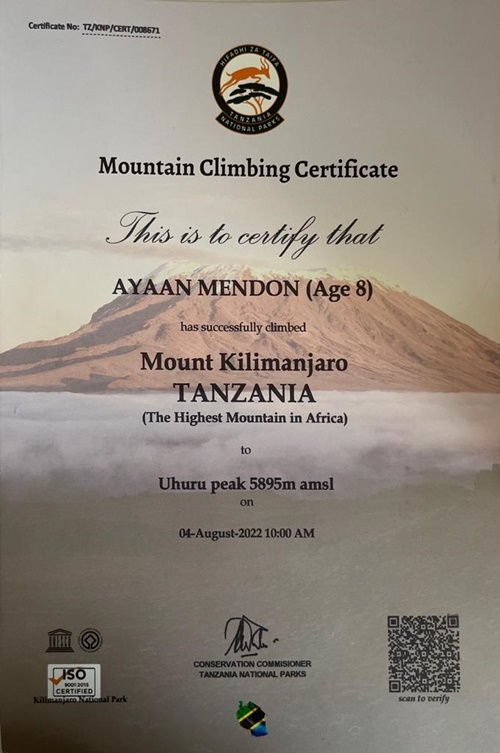 On a practice hike in Nepal, he did very well, which gave his parents the confidence to take him to Kilimanjaro. There starts the planning and preparation for Kilimanjaro.

The training was not easy. Ayaan loves to train with his swimming squad (Proactive Academy) and his trainer (Coach Tariq) for boxing and other workouts. Ayaan is very energetic and is always ready for adventures. Ayaan had trained himself for two years unknowingly that it was to achieve this feat.

To him, it was just the workout, a physical activity he enjoyed and kept him busy. His diet was taken care of, he had regular health checkups, and now and then, we even increased his time doing his physical activities to see how far we could push him and his endurance capacity. With courage, determination, years of training experience, and support from his parents, he started his journey towards the summit of Mount Kilimanjaro, Uhuru Peak.

As much as he enjoyed the hike, the tiredness was real. The days of adjusting to subzero temperatures, altitude sickness, and muscle cramps were not easy, but it was all worth it in the end.

A few times, he had fallen sick, and his parents helped him climb up, holding his hands. At times they even held him when he was tired. There were also times when he would go faster than the guides. Seeing him sick, Ayaanās parents were not even worried about completing the hike. His driving force remained a mystery. Anytime he was told that this hike could be done later, seeing his condition, he said, āNo, let us go up! I want to go up.ā

While descending, Ayaan raced downhill cheerfully, passing by the guides who accompanied them. His tiredness vanished entirely in a few hours after reaching the foothills. While resting, he innocently asked his parents, āNow that I have become stronger and faster, will I now be the Head-boy in school?ā They replied yes, as his grades go up and if he continues doing the right things, maybe the school would select him as the Head-boy one day.

Though this is Ayaanās latest adventure, He is the founder of the recent social initiative #Saveturtles with the sign-off to save the small steps of our little friends. The promise he made to save turtles. His campaign aimed to remove the plastic and other waste products left behind by people. So far, Ayaan has completed five weeks and spent on two locations, La Mer beach and Kite beach, keeping up the promise to Save Turtles.