Mangaluru, Aug 9: A new Konkani music video "Maincho Palo’nv" (Mother’s Pallu) by Krisben Music released recently on its YouTube channel has been receiving a huge response. In a in short span of time, the video has crossed 60 k views. The ceremonial launch of the video was held at the Kulshekar Church's mini hall during the seventh Kavigoshti of Poetica group.

Christopher Roshan Lobo, Founder of Krisben Music, welcomed the guests. An introduction about the song was presented by the renowned poet and songwriter Lloyd Rego who appreciated the efforts put in by Krisben to release songs on YouTube as the Konkani music industry is transitioning from CD era to YouTube era. The video was released by Fr Clifford Fernandes, parish priest of Holy Cross Church, Kulshekar. 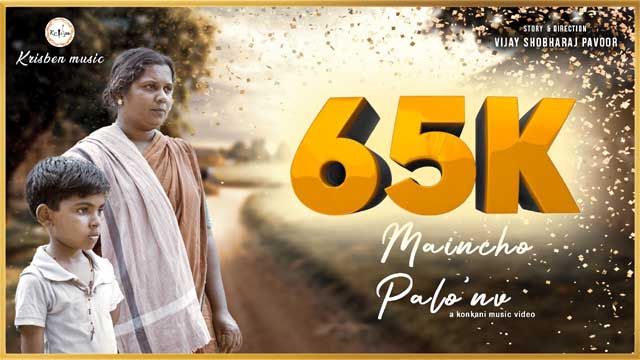 The story depicts how elderly suffer emotionally in modern day life due to ill-treatment and neglect by their children. The main character misses his mother during the hardships and in the course of time, the story shows glimpses of old lifestyle and the importance of mother’s presence in our life.

“This song is sung in Konkani language by a Christian, video is directed by a Hindu, and I am a Muslim, enjoyed watching this beautiful emotional music video; isn’t this the finest example that music has no boundaries, language, and religion?,” said Hamza.

Speaking on the video, Roopakala S N Bhat said, “Unique concept. Though I do not understand the language, the emotions expressed through superb acting reveal the story and pierce the heart.”

“Producer has taken initiative to come out from stereotype music videos; a non-Konkani director has narrated a heartrending story, depicting mental trauma of the elderly ill-treated by their children; deteriorating human values are a concern in the modern era,” said Nanu Marol.