Mangaluru, Aug 8: PSI Sudeep and personnel of Moodbidri police station and Bajpe police faced stiff resistance from accused Mohammed Mansoor alias Adyapady Mansoor (41), when they went to arrest him under court warrant at his residence. He is an accused several cases of dacoity and cattle theft.

Mansoor’s wife and other family members also obstructed the police personnel and tried to assault them. The police took Mansoor and his wife Asmata into custody. 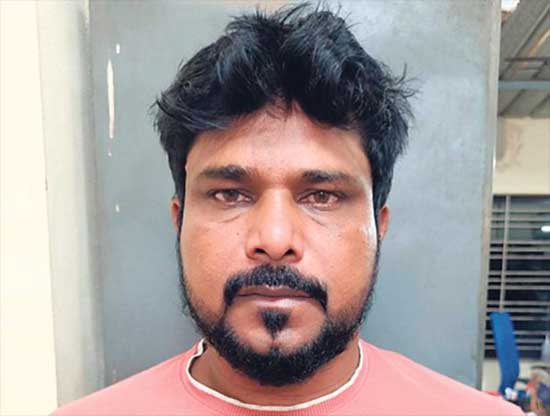 The accused Mansoor, resides in Adyapady Site House. He has six cases in Bajpe police station, four at Moodbidri, three at Kushalnagar and Somwarpet, one case each at Madikeri, Tiptur Huliyala, Sakleshpur Arehalli, Ajekaru, Karkala, Kavoor and Suratkal police stations. In total, Mansoor carries 24 cases on him.

The operation was carried out under the guidance of city police commissioner N Shashi Kumar. The operation team was led by Bajpe station inspector Prakash and Moodbidri station PSI Sudeep.