Meanwhile, search for a schoolgirl, who was washed away by floods while returning home from school in Thogarihankal Gram Panchayat limits in Chikkamagalur districton on Monday, resumed. The girl was returning home with her elder brother and friends. 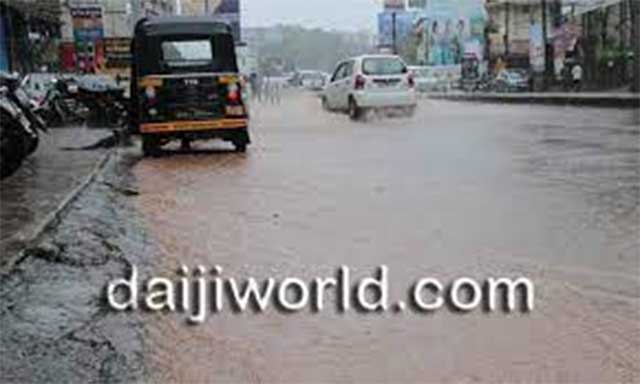 Rainy weather continued in Bengaluru and with drizzles and cold waves, the capital city has turned into a hill station. However, rains have played havoc in hilly regions of the state.

Continous rain has led to uprooting of electric poles and trees in Kodagu district even as a huge boulder rolled down onto the Bhagamandala-Talakaveri Road blocking the movement of vehicles.

Dakshina Kannada district is also witnessing heavy rainfall and the District Commissioner Dr K.V. Rajendra has announced a holiday on Tuesday for schools, colleges and all educational institutions in the coastal district.

In spite of the rise in water levels, devotees have continued to take bath in the danger zone. The temple authorities have given the rope support and guards have been deputed in the area.

Bhadra River in Chikkamaglur district has been overflowing due to heavy rains for a week. The overflowing river has submerged the Hebbale Bridge near Kalasa town.

Orange alert has been issued in Kodagu, Dakshina Kannada and Uttara Kannada districts on July 5, 6 and 9. Yellow alerts have been issued on July 7 and 8.