Mumbai, Jun 24 (IANS): As the Shiv Sena grappled with a potentially "life-threatening" rebellion in its ranks for the third day on Thursday, its Maha Vikas Aghadi allies - the Nationalist Congress Party and the Congress - threw their full weight behind embattled Chief Minister Uddhav Thackeray.

Late on Wednesday, Thackeray offered to quit as CM and as Sena President, and on Thursday, party MP and chief spokesperson Sanjay Raut even said the party is ready to "leave the MVA", with a rider that "all rebels must reach Mumbai in 24 hours and put their viewpoint before the leadership". 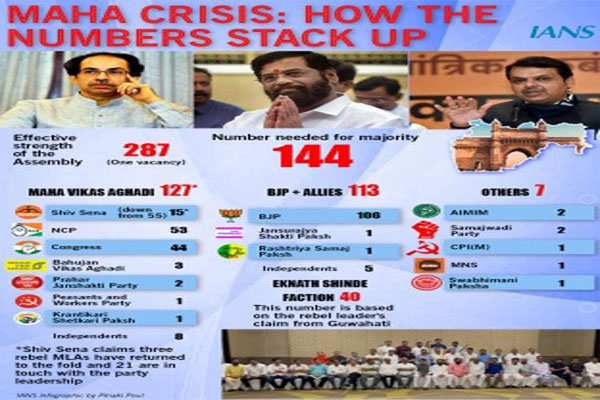 "We are ready to walk out of the MVA, provided the rebels return to Mumbai within 24 hours and hold discussions with the Shiv Sena," Raut said, throwing yet another challenge to the group of rebels led by Minister Eknath Shinde.

He called upon the rebels to stop communicating on social media or phone messages or letters or statements sitting in Assam, and like "true Shiv Sainiks" show the guts to come to Mumbai.

"Come here within 24 hours... Sit before Chief Minister Uddhav Thackeray Saheb and present your viewpoint to him. We shall definitely consider them," Raut declared.

Both the NCP and the Congress, while expressing confidence that the political fracas will die out soon, said they will remain with the MVA and Thackeray till the very end, and if the situation arose, would be prepared to sit in the opposition benches.

Intervening this evening, NCP President Sharad Pawar warned that the "rebels will have to pay the price for their revolt when they face the electorate".

"The MVA government has already proved its majority. Those who call the 3-party experiment a failure are ignorant. The government has performed well and taken many major decisions in the past two and half years," he asserted, dismissing the rebel MLAs allegations of not getting adequate funds for development works as "false".

He pointed out that the rebels "would have to come before the Governor or the legislature" to prove their strength, and after their return, the Bharatiya Janata Party (BJP) may not "guide" them.

Pawar also expressed confidence that the rebel Sena MLAs will return to the party fold and flayed the manner in which they were taken away as "improper".

On the side of the mutinous lawmakers camping in Guwahati, the torch-bearer, Shinde has been "elected" as the breakaway group's leader and authorised to take all decisions on their behalf.

According to a video that emerged late this evening, Shinde is heard praising the BJP, terming it as a "national force which taught a lesson to Pakistan" and would take care of the rebels.

The "Shinde Sena" has claimed the support of "over 40" Sena MLAs, while the Sena in Mumbai is left with around 18 legislators, but it has disputed the rebels' contentions, saying "everything will be clear only when all the deserters come to Mumbai".

Speculation is rife that the Shinde group is also making attempts to wrest control over the Shiv Sena with its claimed support of around 40-plus MLAs, but Sena MP Priyanka Chaturvedi dismissed it, saying there is a huge difference between making claims and actually doing it.

The sudden calamity that gripped it late on the night of June 20-21 has shaken the once aggressive Sena to the core amid gloomy prophecies that this could be "swan song" for the party plus the second and third generation Thackerays - CM Uddhav and his son Minister Aditya.

The party had earlier weathered similar disasters, though much less serious, with persons like Chhagan Bhujbal, Narayan Rane, Sanjay Nirupam and even family member Raj Thackeray quitting at various points in the past 30 years.

However, the Sena not only weathered those departures which in retrospect proved to be mere dents, and the party marched ahead with confidence.

This time round, the Sena seems to have landed in a burning fire where its very existence - with the supreme control of the Thackeray family - appears to be at stake, not to mention the survival of its 3rd alliance government.

Spelling solace, NCP state President Jayant Patil and state Congress President Nana Patole, and other central party leaders pointed accusing fingers at the BJP for creating the political upheaval that threatens the continuation of the MVA.