Bhopal, May 23 (IANS): At least four people were injured after two groups indulged in violence and pelted stones at each other in Madhya Pradesh's Ratlam district. The incident took place due to the playing of DJ at a marriage procession to which the other group objected which resulted in violence, local police said on Monday.

As per the police, on Sunday night, a Muslim family was carrying out a ritual process after marriage. Some of them were dancing to the tune of the DJ. As the procession passed through a temple at Kothdi village, a group of people from the Hindu community objected to the songs being played. 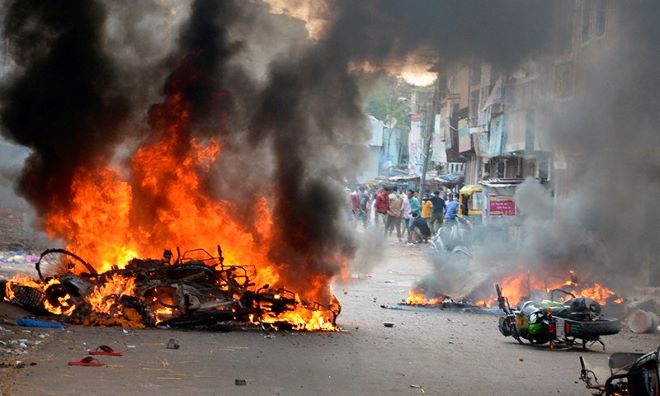 This resulted in an exchange of heated arguments between the two communities, which soon turned violent and stones were pelted at each other. Police said at least four people were injured due to stone pelting and they have been admitted to a government hospital in the district.

After getting information, a team of local police reached the spot and tried to bring the situation under control. Additional police force from adjoining police stations was also brought in to control the situation, police said.

In the meantime, district SP and SDM (Sub-Divisional Magistrate) reached the spot. "We reached the spot and spoke to people from both sides and the situation was brought under control. However, to avoid any further untoward incident, security has been beefed up in the area," said Ratlam SP Abhishek Tiwari.

Tiwari further informed that an FIR has been lodged and nine people have been booked for indulging in violence. "Four injured have been admitted to the government hospital for treatment. Further investigation is underway," Tiwari added.

Incidentally on Monday morning, Chief Minister Shivraj Singh Chouhan held a meeting with district administration and the police of Rajgarh district where two incidents of violence occurred in the last one week. During the meeting, Chouhan appealed to local MLAs and MPs to meet people in their respective areas and have conversation with them.