Kadaba, May 13: “Though there is a differently-abled person living in the house, the house is demolished mercilessly and we are rendered homeless,” said Roshan D’Souza, resident of Moodubailu of Kaukradi village of Kadaba taluk. Roshan has filed a complaint in this regard with district administration and office of the rights of differently-abled people.

In his complaint, Roshan says, “We were owning 1.45 acres of land from our ancestors on survey number 138/1 based on the Relinquishment Deed written in our name by our ancestors. Now the house and crop is demolished with an excavator. 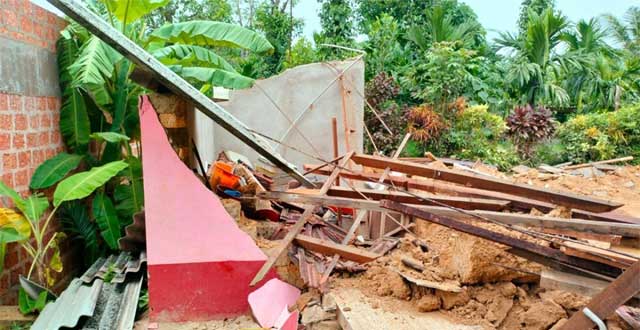 “Though the land was mentioned in the application according to land reform act, when registering LRYT form no 10, this survey number was left out due to oversight. A person, who got the deed written by land owner, brought JCB and asked my mother to get out of the house and made us orphans. Now I am residing in my brother’s house.

“I approached police and revenue officials for help, when the person was demolishing our house. But they did not respond. Now DySP, Kadaba special tahsildar, police inspector and other officials have visited the site after the intervention of state differently-abled protection committee,” he stated in the complaint.

Chandrashekhara Puttappa, working president of Karnataka state differently-abled protection committee, says, “It is a crime to demolish the house, knowing that a differently-abled person lives in it. The police would have prevented the demolition at least till the truth of the matter was known. A comprehensive investigation needs to be done on this act and the family should get justice.”