Chaos reigned for the second consecutive day outside the Rana couple's home in Khar and Thackeray's private residence 'Matoshri' in Bandra east. 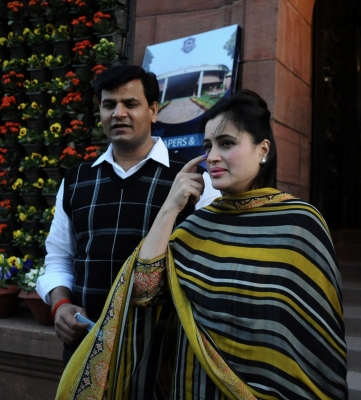 Modi is scheduled to visit the Shanmukhanand Hall in Sion, barely 6 km from Thackeray's home, where he will be conferred the first Bharat Ratna Lata Mangeshkar Memorial Award, causing worries for the Mumbai Police.

On Saturday morning, the Ranas were detained at their home by the police and prevented from travelling to 'Matoshri' to recite the Hanuman Chalisa there.

Hundreds of Shiv Sainiks laid siege at both venues and demonstrated at other places in Mumbai, protesting the Ranas' plans to target 'Matoshri'.

Among them was a sprightly 80-year old granny who announced that she would fight till the end against anybody who cast an evil eye at 'Matoshri'.

Moved by her, the Chief Minister's wife Rashmi and their son Aditya Thackeray invited her inside the home, offered her tea and snacks, and urged her to take care of herself and not spend too much time in the blazing sun.

Hitting out, the Bharatiya Janata Party and the Ranas have alleged that a mob of Shiv Sena workers allegedly attacked their (Ranas') home in Amravati, besides attacking BJP activist Mohit Kamboj Bharatiya's car in Bandra early this morning, and demanded they should be arrested.

Leader of Opposition (Council) Pravin Darekar alleged that there is a complete collapse of law and order under the Maha Vikas Aghadi (MVA) government in the state and demanded imposition of President's Rule here.

The Ranas accused the Chief Minister of "sitting at home for two years", and "doing nothing except targeting political opponents" and conspiring to trap them in legal problems instead of looking after the state administration.

"Let them come here and render Hanuman Chalisa, we are ready to serve them 'Maha Prasad' (a beating) in Shiv Sena style," warned Desai.

The leaders said that the BJP is attempting to create a law-and-order situation in the state and use it as an excuse to bring the state under President Rule, but the MVA would not allow it.

Home Minister Walse-Patil reiterated that if the Ranas violate the police prohibitory notice, they would face appropriate action.

The Ranas told mediapersons that the Chief Minister had 'forgotten' the teachings and ideals of his father, founder of Shiv Sena, the late Balasaheb Thackeray and they had come to Mumbai to remind him about 'Hindutva', even as the BJP distanced itself from the campaign.

Rejecting contentions that they were being instigated by the BJP, the husband-wife duo claimed that they won their seats on the basis of their public services without depending on anybody's support.

Vinayak Raut warned that if the Rana couple tried to target the Thackeray's home, Shiv Sainiks will not keep quiet and "give them a befitting reply".

In Nagpur, Sena MP and chief spokesperson Sanjay Raut dismissed the Ranas as 'Bunty and Babli' who have reached Mumbai to perform 'stunts' to please their political bosses.

Pednekar said those who cannot win elections without the support of the BJP are now trying to foment trouble for MVA government with such 'nautanki' (dramatics) to divert attention from the country's major problems like inflation, fuel price hikes and unemployment.