Mangaluru, Apr 14: MLA U T Khader demanded minister K S Eshwarappa's resignation and said that he should be sacked from the cabinet over Santhosh Patil’s suicide. He also urged the government to hand over compensation to Santhosh Patil’s family.

Addressing media here on Thursday April 14, Khader said, “When the BJP cannot protect their own representative, then will they protect the public? When a minister’s name is mentioned in the FIR, enquiry has to be done by giving a free hand to the cops. Despite Eshwarappa’s name in the FIR, the BJP government, party, chief minister nor the Prime Minister have not initiated any action against him by seeking his resignation. This will be a bad tradition that will be followed by BJP in the coming days. 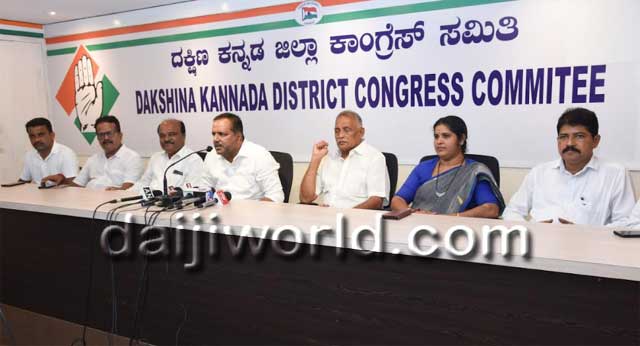 “People are realizing the difference between Congress’ and BJP’s administration. When K J George’s name was mentioned in DySP Ganapathy case, George resigned and the case was handed over to the CBI. It was the then opposition leader Eshwarappa and MP Nalin Kumar Kateel who protested fiercely. Why is the law different now in Santhosh Patil case when he held minister Eshwarappa responsible for his death?

“Why has the BJP government not revealed the CBI’s report in the Paresh Mesta case? The contractor association president and deceased Santhosh Patil wrote to the Prime Minister over the 40% commission issue. Why there was no reply from the Prime Minister demanding probe who once said ‘Na Khaunga Na Khane Dunga’. I demand minister Eshwarappa's resignation and also compensation for the deceased’s family,” he said.

Former MLA Abhayachandra Jain said, “We will protest against Eshwarappa until Santhosh Patil gets justice.”