Chamarajanagar, Jan 23: Here is a unique case of a couple asking people not to attend their wedding, officially! The same couple had planned for a grand wedding way before the Covid third wave swept across Karnataka in the presence of their families, friends and close ones and had also invited them.

With Covid creating challenges often with variant viruses, the government and district administrations have been taking precautionary measures. However, with the state has been witnessing about 50,000 infections every day, grand weddings among many events had to take a back seat. 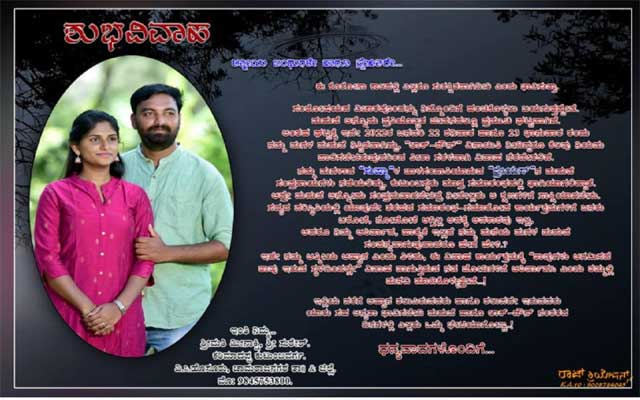 Many have been organizing online marriages to allow friends and relatives to witness the event. Some others have been postponing their weddings frequently, waiting for the infection to come under control. But a couple from Chamarajanagar has decided to marry on a pre-decided date. It has printed unique invitation cards and distributed them among the relatives and friends.

Through the invitation cards, the couple has requested its near and dear ones not to attend the marriage but them from wherever they are. The couple had earlier decided to marry in a lavish way and had distributed invitations. If everything had gone as planned, Shreyas V C from Channappapura here and Sushma from Hosur were to marry on January 22 and 23 in the presence of a large number of friends and relatives.

However, with the increase in infections and consequent restrictions. Sushma and Shreyas, instead of postponing their marriage, settled for a simple event. Both the families, in the new invitations, have reminded the invitees that they have to follow corona regulations.

Fearing the infection might increase, it has been decided that only the close members of the two families will attend the marriage.