Bengaluru, Nov 11: In a sharp reaction to Prime Minister Narendra Modi’s assurance to Chief Minister Basavaraj Bommai not to worry about Bitcoin Scandal and carry on with his work, Karnataka Pradesh Congress Committee Chief D K Shivakumar challenged the State Government to divulge all details and place the facts before the public.

“It is good if the Prime Minister has reassured the Chief Minister, the government can disclose all details at least now,’’ he said and declined to comment on whether the Chief Minister went to Delhi on his own or was summoned by the Delhi leaders. 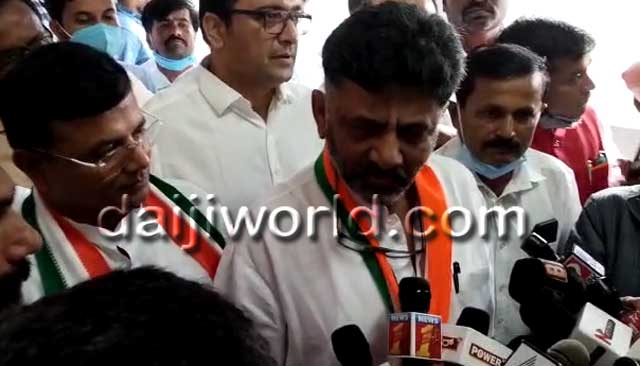 Answering questions during his press conference in Bengaluru on Thursday, he wondered why the Chief Minister raised the issue with the Prime Minister and wanted to know if anybody had suffered losses or if money had gone out of the country and who are actually involved. Let the government place all details on why an FIR was filed in the scandal and the persons who had been interrogated and arrested, he said asking why select details were being leaked to the media.

On the allegation that names of BJP leaders also feature in the Bitcoin scandal, the State Congress Chief demanded that all issues and aspects must be investigated.

Shivakumar alleged that the ruling BJP leaders were trying to tarnish the image of Congress leaders by raking up an old case, which will never be successful. “We too have some information and will reveal them at the appropriate time,’’ he said demanding that truth should come out.

Referring to the Chief Minister’s statement that an FIR has been filed in the Bitcoin scandal and that some Congress leaders were involved, the State Congress Chief wanted Bommai to disclose whether the names of some BJP leaders figure in the letter reportedly sent to Prime Minister and wondered why the Chief Minister was silent on the issue.

Shivakumar alleged that the Chief Minister was deliberately suppressing the names of BJP leaders and attempting to link the names of some Congress leaders. “We are not interested in protecting anybody. Let the guilty be punished and even hanged. Nobody, whether from Congress or BJP should be spared. The Government must come clean on the entire issue. Political vendetta will not work,’’ he said.

The KPCC Chief attacked the State Legislative Assembly Speaker Vishweshwar Hegde Kageri for not bothering to wait some more time merely because the victorious Congress candidate from Hangal constituency Srinivas Mane came 5 minutes late than the scheduled time of 11 am for the oath taking ceremony.

“Yes, we were late and were not there at the appointed time of 11 am. But we were held up in traffic and had intimated in advance that we will be late. The Speaker, however, fixed the time to 12 noon and went out stating that he was busy and had to attend another programme. We have been waiting for his arrival since the last one and half hours. We respect the Speaker. But merely because the Congress won the seat against BJP should not be the reason for expressing displeasure,’’ Shivakumar said and pointed out that the attitude of the Speaker was not a good development in a democracy.

The KPCC Chief asked the government to accord due respect to the farmers and supported the farmers agitating in Belagavi against the high handedness of the police.