Mangaluru, Oct 25: With the reopening of classes 1 to 5 today all over the state, students are eager to go back to schools and meet their old friends. They also have a nervous feeling about being able to mingle with friends and study. Meanwhile, their parents are under pressure to pay school fees and buy uniforms on their own.

For the students of standards 6 to 10, some educational institutions are already holding physical examinations. Before appearing for the exam, it has been made compulsory for the students to clear their first and second instalments of the fees. The parents who were not serious about the fee payment as the classes were online, are now compelled to pay the fee. 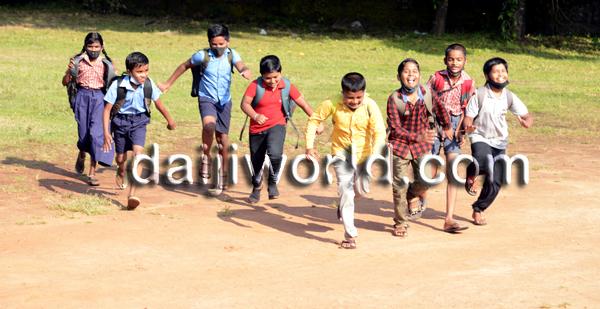 During the last year, the educational institutions had extended 30 percent concession in fees. This year, there is no exemption, and the students have to pay the fees for the entire year. Last year, some teachers and other staff had been retrenched from service. Several were paid partial salaries.

This time, teachers and other staff are attending schools and in a few schools, school vehicles have been introduced. Some of the drivers have sold the school vehicles. Because of the hike in petrol and diesel prices, transportation charges have gone up. As many school buses are not in operation, most of the students depend on buses to attend their schools.

The parents of the existing students and those who have newly joined, are buying uniforms from textile shops. A shop near the central market where uniforms are sold, has been witnessing good rush from the morning to evening. The parents say that the cost of uniforms has gone up this time.

Likewise, parents are also buying notebooks, bags etc from shops. People who lost jobs because of covid19 and parents who are getting partial salaries are finding it hard to set aside money for these purchases.

Speaking to Daijiworld, Rishika, a class 3 student studying at SLNP Vidyalaya Panemangalore said, “I was very excited to go to school after a year and half. Since a year, it was boring sitting at home. I was eagerly waiting for the school to reopen. I could not sleep last night due to excitement over going to school. Yesterday, I went with my dad to bring new shoes and bags.”

Rishika’s mother Meenakshi said, “My daughter’s excitement was at a different level last night. We had to purchase her new uniform and shoes as the old ones were not fitting her since the school was closed for over a year. Hence, we took her to purchase new pair of uniform and shoes. She was asking me almost every day about the reopening of schools. She would also pray for the same. To see my daughter’s excited itself makes me very happy.”