Shivamogga, Oct 25: The wife of a terror suspect has been arrested based on the source of the money forcibly collected by making threatening calls to a Shivamogga-based entrepreneur.

For the last some months, there were reports of Shivamogga-based entrepreneurs getting phone calls from the central jail at Parappana Agrahara Bengaluru, demanding protection money. These calls were untraced. A particular call, said to have been made by Rowdy Bachchan, had caught a lot of attention. Recently, a case had been registered in the cybercrime division here about a businessman from here getting repeated threat calls from Hebbettu Manja. 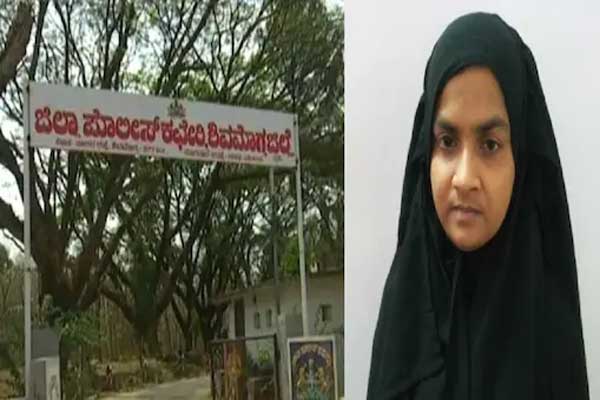 The personnel of the cybercrime, economic offences and narcotics (CEN) police station here have succeeded in cracking this case. The police have come to know that the person who made call to the Shivamogga businessman was a suspected terrorist. The businessman had filed complaint in CEN police station here after he received threatening calls from Bangalore Central jail. As the calls were made through WhatsApp, the police could not make much headway in investigation.

CEN station inspector Gururaj, started to look at the case from different angles. The police who collected details from the entrepreneur learnt that the amount collected was transferred to an account number held in the name of a relative of the man who made the threatening call.

The police then began to investigate the source of the account. They got the address of a lady from Bhatkal. The police, who tasted some success, took Saira Banu, letter of authority holder of the said account, into custody. During her questioning, Saira revealed that her husband happens to be Saddam Husain, a terror suspect. Saddam Hussain is an accused in the church street Bengaluru blasts. He faces the charge of providing gelatin to those who triggered the blasts. Saddam Hussain also faces the charge of burning the motorbikes in Bhatkal and having contacts with several terrorists. The police who thought that the call made in the name of Hebbettu Manja was made by another man from Bhadravathi, have now come to know that it was the handiwork of Saddam Hussain.

The police suspect that Bhadravathi Naga, who has been lodged in the same jail, may have joined hands with Saddam Hussain. They therefore want to take into custody Naga and Saddam to question them.

The suspicion of the policemen that the call would have emanated from Parappana Agrahara prison has been strengthened by the fact that the amount was credited to the account of the wife of a terror suspect. Investigation as to how a terror suspect lodged in jail could make a call is also under way. It is certain that the accused and criminals are able to access the phones and many illegal activities are going on inside the walls of the prisons.