Mangaluru, Oct 18: Coastal Karnataka has been receiving heavy rainfall for the last two days. Unexpected heavy downpour has damaged over ten houses. A large number of electric poles got uprooted and water which gushed into paddy fields has given rise to apprehension in the minds of farmers.

On account of the depression over the Bay of Bengal, in addition to coastal districts, southern interior Karnataka and a few areas in north interior Karnataka have received heavy rainfall right from Saturday evening. The rain was accompanied by lightning and thunder. Due to heavy rain and lightning in rural areas, many electric poles fell down causing power supply problems. In urban areas, water which entered low lying areas on Saturday night caused lot of problems. In some areas, flooded areas remained so without the signs of water level receding during the major part of Sunday. 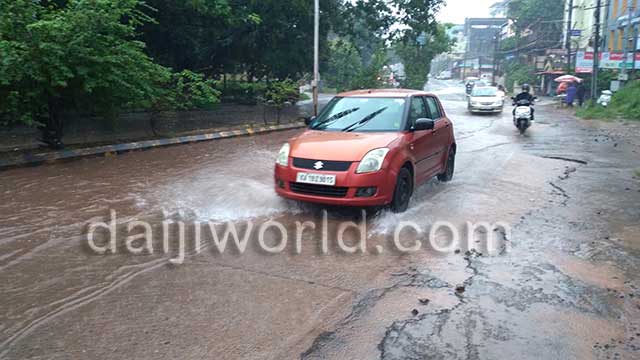 The meteorological department has issued yellow alert for two more days, as per which normal to heavy rainfall is expected.

Depression in the atmospheric pressure was witnessed in Lakshadweep in the Arabian Sea and southeast region of the Bay of Bengal. These developments are said to have caused this sudden rain. The department expects the monsoon to recede in a week after which post monsoon winds are likely to enter the state.

The compound wall along with the adjacent electric pole located at Bhatra Bail, Neermarga here crashed, inflicting damage on a house. In Bajal area, after a house was thoroughly damaged, the inmates were shifted to the house of relatives. Agricultural crops in Matarabail, Neermarga, suffered heavy damage due to the inflow of rainwater which flowed through the drain. A house in Bangrakulur was also extensively damage due to the rainfall.

Because of the heavy rain received on Saturday night, vehicles in Bantwal B C Road struggled to move as water flowed on the road on account of the absence of proper drains.