Mumbai Sep, 12: As the daily tally dropped below 400, Maharashtra reported the lowest number of covid 19 cases in 214 days. Officials stated that the fall in the cases was due to the decline in testing during the festive season.

Maharashtra reported the lowest cases since Feb 9 (2515), the number of cases reported was just 3,075 and 35 deaths. This is the lowest that Mumbai has seen over the last six months. This makes a total of 64.9 cases and 1.4 lac deaths in the state. The total number of tests conducted in the states was just 1.3 lac when compared to the average of daily tests which was 1.5 to 1.7 lac. 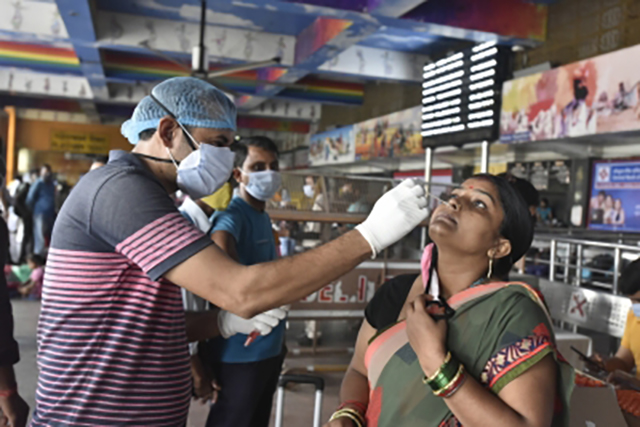 The number of cases reported in Mumbai were 361 and four deaths, which raised the cases 7.34 lac and deaths to 16,015. There was a drop in the Mumbai daily detection in September for the third time in Mumbai to below 400.

However, the BMC health machinery is not overdriven regarding this. BMC additional commissioner Suresh Kakani said that it's reassuring that the positivity rate in Mumbai has not crossed 1%. On Friday, which was a government holiday, 35,851 tests were conducted. While around 50,00 tests took place in the three days run-up prior to the Ganpati festival.

Kankani stated "since the people who left the city for Ganpati festival will return home, we will have to be careful. We have to be quick in catching infection so that it doesn't spread further. "

BMC will be on high alert till the fortnight of visarjan, i.e October 5, '' he added.

The state officials have stated that the festival is celebrated with a lot of grandeur in districts of Western Maharashtra and the Konkan region hence they asked them to be extra cautious.

The senior official said, "We have guided the district collectors to make sure that the covid tests are made easily available in the jurisdiction and to conduct tests in crowded places such as markets."