Jalandhar, Oct 24: Fr Kuriakose Kattuthara had received threats several times and was even attacked once after he testified against Bishop Franco Mulakkal, reveal brother and sister-in-law of the priest who was found dead under mysterious circumstances on Monday.

The kin of the priest told media that they suspect foul-play. “In his last call with us, he had told that his death is certain if Bishop Franco gets bail and had asked us to pray for him. The Bishop had earlier visited my brother’s parish and had spoken ill about him with the parishioners,” alleged Jose Kattuthara, brother of Fr Kuriakose.

Jose demanded that Fr Kuriakose’s autopsy has to be done in Alappuzha as he has no faith in Jalandhar police, who may make his death seem as natural. However, Jose is certain that Fr Kuriakose’s death is a result of his testimony against Bishop Franco. 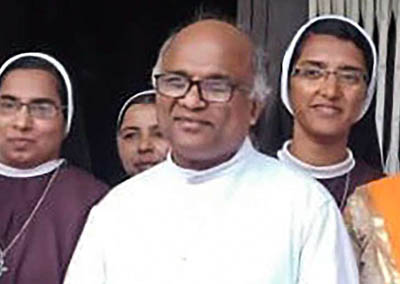 Jose and his wife Elsamma have denied that Fr Kuriakose suffered from heart disease. “He had BP and was diabetic but did not suffer major health problems,” they told media.

Elsamma added that in spite of several priests being eligible to become Bishop, Franco used his power to get to the post.

The 62-year old priest returned to his residence after offering Sunday Mass and went to bed without eating dinner, the parish helper told the police.

The church has issued a press release stating that when nuns of St. Paul’s convent in Dasuya found Fr Kuriakose not responding to their knocks, they informed church authorities. “Fr Kuriakose was found lying down with vomit from the mouth. Immediately he was taken to the Civil Hospital and they declared him brought death,” stated the press note.

Title: ‘Fr Kuriakose was certain about his death if Bishop Franco got bail’