Another missed-tea with President for this Freedom Fighter

Mangaluru, Aug 11: On ‘Kranti Divas’ celebrated on August 9, it was another ‘missed tea’ with the President at Rashtrapati Bhavan for this 94-year old veteran freedom fighter from Dakshina Kannada. For it is the fifth time in a row, save 2018, this freedom fighter who had hoped to be shortlisted among the invitees to commemorate Quit India movement is left disappointed.

“He had gathered Rs 48,000 from whatever was left after his expenses and charity from the freedom fighters pension, hoping to use it for the Delhi journey. He is against borrowing money from us (children). Even until August 8, he was on his toes to leave to Delhi on call from Rashtrapati Bhavan,” Satish, son of Shyama Rao said. 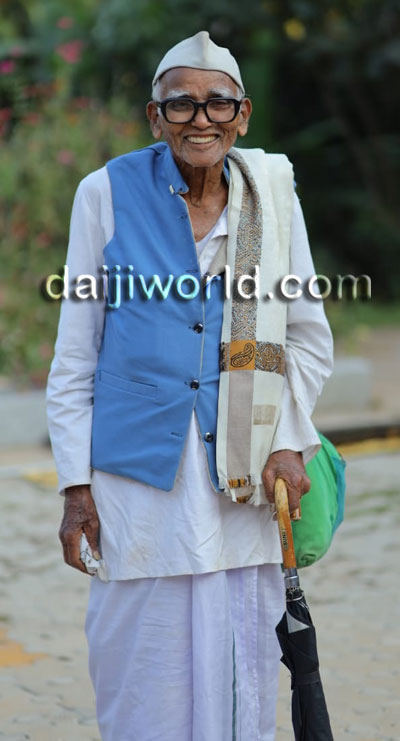 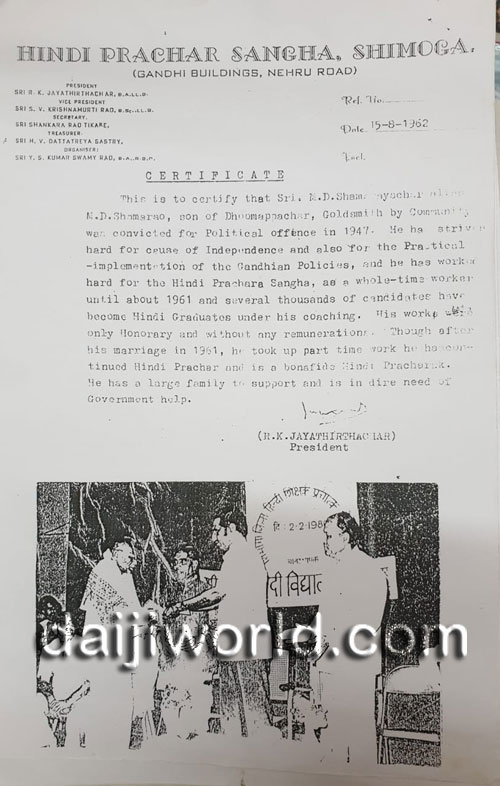 Sporting a Kurta, Khadi Jhola, Nehru Topi, Umbrella, and a childlike smile through his thick spectacles, Shyama Rao meekly gives an affirmative smile to his son’s words. According to Satish, for each year since 2015, the freedom fighter from Bantwal has been asked for his consent to join the ‘High-Tea’ organised by the Rashrapati Bhavan in commemoration of Kranti Divas, a day observed to remember Quit India movement (1942). “The local Tahsildar’s office is very prompt in asking us to send our details, documents and consent to attend the ceremony. Even they are very keen on facilitating my father’s paper work to higher-ups. But there onwards, there is no intimation from Rastrapati Bhavan confirming his invite," Satish said.

“Infact on August 7, 2018, Shyama Rao received his invitation along with one aide, but neither we had time or money to leave at such a short notice to arrange for the travel. But this time, my father had made all the necessary arrangement to meet any short travel intimation or exigency. All things are set for travel, except for his invitation from the Rashtrapati Bhavan,” Satish said.

An electronic repairer by profession, Shyama Rao is fondly known as Hindi Master in Shivamogga (Hindi Meshtre in Kannada) for his active involvement in propagating and educating the locals in Hindi dialect in the region. He claims to have been arrested by the British around 1946, during the last leg of freedom struggle at Mysuru. “We were a group of youngsters who participated in Gandhian way of protests and demonstration against the British. In 1942, I was forced by my family to leave Bantwal since there was a lookout warrant. Subsequently, I had to come to Shivamogga in year 1942 and also changed my name Shyamarayachar to Shama Rao,” the 94-year old said.

However, Shayama Rao’s policy of frugal living, charity and service mind-set, 44-year old Satish recollects had a bearing on the family that had little or no income at home at times. “Even at work, he used to repair electronic equipment mostly free of cost. While we are proud to be children of a freedom fighter, but we never received much entitlements of being freedom fighters children,” Satish said.

A veteran, who commutes between Bantwal and Shivamogga these days, this year Shyama Rao said that he had visited village accountant and Taluk office for his travel consent to Delhi. “Even people from Bengaluru had called to confirm his travel plans and health condition, but then there was no follow-up from any government body,” he said.

Speaking to Daijiworld, an official from Bantwal Tahsildar office said that even they were keen on seeing Shyama Rao with the President of India. “We have sent, time to time details about the veteran to our departmental heads. Even we are disappointed that he didn’t receive any response, given his preparedness,” he said.

Speaking on his interest to travel to Rashtrapati Bhavan, the father of six children said that it is not the mere travel but a sense of honour that is special and unique in meeting the President of India. “There are few people who have lived to witness 72nd years of Independence. Though at a fragile age, he is fit to make a travel, I just wish to see him fulfill his wishes, since by large he has lived for people and society of this country,” Satish said.

Title: Another missed-tea with President for this Freedom Fighter