Udupi: Super actor dog acts dead, saves itself from the jaws of a leopard

Udupi, Aug 14: A dog fooled a leopard, which is considered smart when it comes to having its prey, and saved its life.

The dog acted as if it was dead and saved itself from a potential attack of the leopard. This incident took place at Parkala near Manipal. 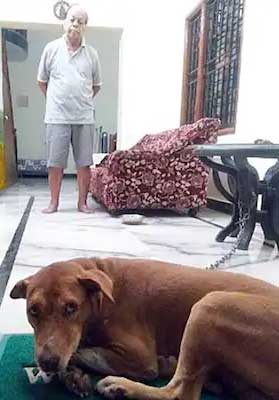 Leopard attacks and sighting is quite common in the vicinity of Parkala these days. Leopards have entered the quarters that are opposite Manipal university and created a ruckus. A month ago, al eopard was found near the  Peacock point. Two days ago, a video went viral in which a leopard was trying to pull the dog that was tied with a belt at home.

In the video it could be seen that the leopard waited for about one-and-a half minute by hiding beneath the swing in front of the house. Then it suddenly leaped on to the dog Tomi at Ramachandra Kedilaya's house. All those who watched the video thought that the dog was dead. The leopard had bitten the neck of the dog for about four minutes. Tomi fought for some time and then fell as if it was dead.

In the mean time, the owner of the house switched on the lights. The leopard also escaped from the spot leaving the dog behind. So Tomi survived against all odds.

Tomi is being given medical aid since the attack and is doing fine now. The acting of the dog like a dead animal stole the hearts of all viewers.

Title: Udupi: Super actor dog acts dead, saves itself from the jaws of a leopard